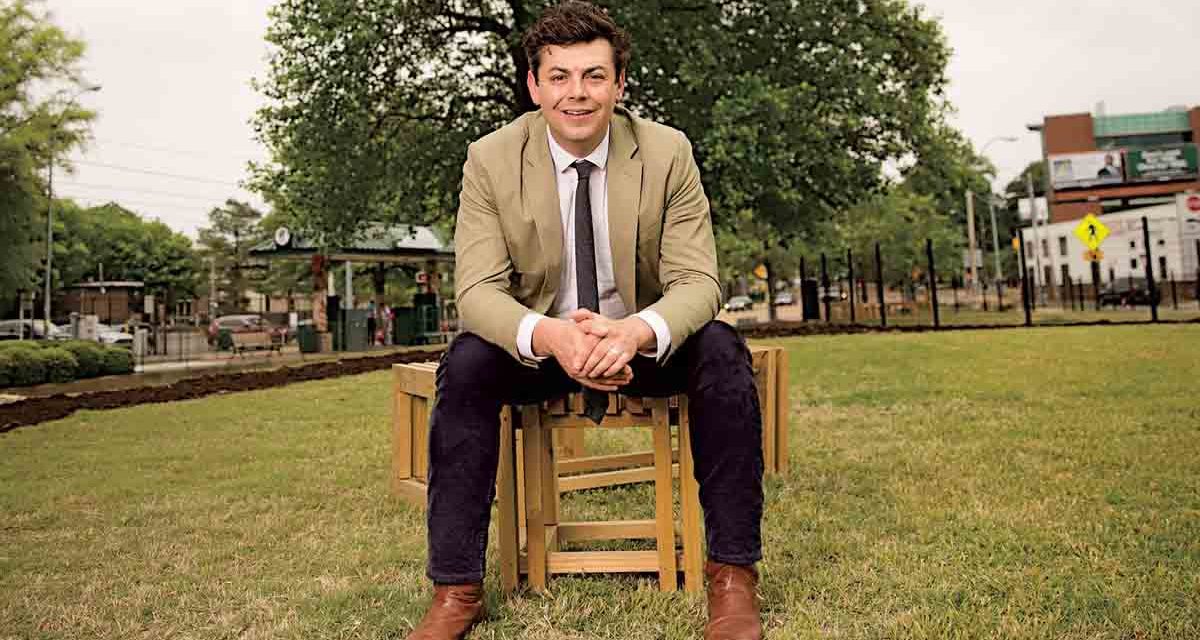 There are some deaths that are nothing less than a punch in the gut. Heartbreaking, defying everything we say about karma, and leaving us reeling in grief.

Such was the death Monday of Tommy Pacello.

When our 32-year-old daughter died of cancer, I wrote that if there is a Satan, his name is cancer.  Tommy had one of the worst kinds of cancer – pancreatic – and as soon as he received a diagnosis that would debilitate even the strongest of us, he did what he always did – he focused on others.

While Tommy was known as a visionary, he was always anchored in reality.  He knew what lay ahead for him.  More than anything, he was concerned about how his death would affect his wife, Olivia; two beautiful daughters, Colette and Cecile; his parents, Tom and Elaine Pacello, and his sisters, Kelli de Witt and Kerri Pacello.  As Daily Memphian’s Geoff Calkins wrote, he set about using the remaining months of his life recording what amounted to an oral history for his young girls, three and one years old, and sharing experiences in hopes they would remember them in these difficult days.

It’s not that he was stoic about what was to be.  He could get emotional thinking about his girls living without him, and that was part and parcel of Tommy as well.  If things mattered – his family, his friends, or his city – he was emotionally engaged.  It demanded the best he could give and inspired so many to do the same.

And give he did.  Time and time again as he grew from a young lawyer embedded in the Memphis and Shelby County Division of Planning and Development to someone whose words and example had power in the halls of government, business board rooms, and on the streets.

In 2008, Cardell Orrin and I were hired by Shelby County Mayor A C Wharton Jr. to develop the first sustainability plan for our community.  The work was simultaneous with my daughter’s battle with cancer and I remember his kind words and the way he pitched in along with the division’s director, Richard S. Copeland, so I could spend as much time as possible with her.

Over the years, I would come to understand how characteristic that was of Tommy and the  limitless time and concern he gave to others.  In the 12 years I knew him, I never heard him decline a request for help, advice, or direction, whether it came from a close friend or someone who he had just met.

When the public input phase of the Sustainable Shelby ended, a small team from OPD guided the writing of the recommendations, but no one contributed more than Tommy.  His ideas challenged business as usual, called on the city to see beyond the present and to imagine new possibilities, and his good humor was fuel for the process’s ambition.

The smile that seem to be affixed permanently to his face never faded.  It could light up a room and while he welcomed debate about his ideas, his smile defied anyone to make it personal.  No one did.

After he moved to Austin in 2009 to work for Code Studio on forms-based codes, he did it because zoning could be instrumental in producing vibrant, mixed use, walkable communities.  He learned a great deal during his time there, but it was clear that this heart was still in Memphis.

While he was living in Austin in 2011, I asked him for his new year’s resolution for Memphis.  He said that Memphians should travel more to see what lessons it can learn from other places, but he also previewed the attitude that he would bring back to Memphis:

“For a city with a proven history of innovation, all too often I hear or read reasons why new ideas, restaurants, businesses, or approaches conceived in Memphis by Memphians will fail. One thing I’ve noticed while living in Austin is that the Austinites tend to do all that is in their power to support each other. The community genuinely wants innovative ideas and concepts not only to work but to thrive and there is a collective sense of pride from their success. Perhaps we could all take a note from this and try supporting new ideas this year.”

And that is precisely what he did upon his return. In January 2012, just over two years after he left, he came back.  Bloomberg Philanthropies was funding the Mayor’s Institute for Excellence in Government, and Mayor Wharton was hiring staff for the Mayor’s Innovation Delivery Team that it was sponsoring here.  I immediately suggested it was a chance to bring Tommy back.  So did Kerry Hayes, then Mayor Wharton’s chief policy person and now chief of staff to Chattanooga’s mayor, and there were probably dozens more who did the same.

At the Innovation Delivery Team, he was a one-man brain trust.  He was a driver of what Memphis should do to attack blight and vacant properties, to improve declining neighborhoods to support new and existing businesses, to use a collective impact model to make it happen, and to advocate for planning and policy to make it happen.

Generous in spirit and ready with an encouraging word, he was instrumental in creating a more positive attitude in Memphis, one more self-confident and supportive of risk-taking ideas.

Buckshot Rather Than Silver Bullets

Beginning in May 2015, he was hired by U3 Advisors, which works with anchor institutions to unlock their impact.  One of their clients was the Memphis Medical District and in January 2016, Tommy was hired as its first president.

It was there that he applied all that he had learned, all that he advocated for, and all that he imagined was possible.  There he launched the “Live Local, Buy Local, Hire Local” program, a program offering grants to people locating businesses in the district, grants for homebuyers in the district, the shipping containers turned into the Shab Chic Marketplace, and the program allowing people to use an app to get a seat on a passenger van directed to a nearby virtual bus stop, and more, all guided by his “buckshot philosophy” about a diversified approach rather than silver bullet strategies.

He explained his philosophy and his ambitions in the April 25, 2018, Smart City Memphis blog post: “Transforming the Medical District Into a ‘Real’ Place and Lifestyle.”

The arc of his professional career was clear: it had a clear and definite trajectory and he was destined for even greater things as he collected more and more disciples around him and who now must carry on his work.

Tommy died way too young – 43 years old. On his Linkedin page, he described himself as an “attorney and city planner focused on designing and implementing innovative approaches to city building.”

And yet, he did more than focus on it.  He delivered. And he took us along on his journey.

His passion for New Urbanism, his diligence to engage in new ideas like tactical urbanism, his prowess in bringing disparate interests together, and his ability to inspire big ideas leaves a legacy that would be the envy of someone twice his age.

At times like these, there is nothing we can say to ease his family’s pain, but hopefully, they draw strength from the way he touched so many in the city he loved and how deeply he was loved in return.

Rather than dwell on what Memphis has lost, all of us focus on all that he taught us and what he accomplished.

It’s hard to think of a more appropriate testament to his life than this.