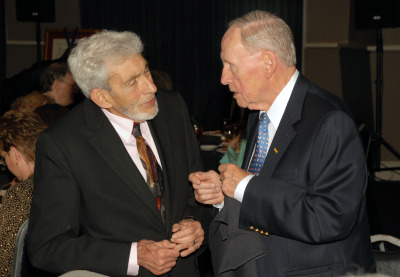 We were lucky enough to know Art Wolff and consider him a friend.  He dedicated his lifetime to fighting for causes he believed in, and Shelby Farms Park was at the head of that list.  He did it regardless of whose feathers he ruffled or whose attacks he weathered because his cause always mattered to him more than whether the “powers that be” liked him.

Long  before anyone saw the rich potential of the 4,500 county-owned acres in the heart of our community, he did.

Long before there was an army of support to protect the land for public use, he was already standing on the front lines.

Long before there were many people volunteering to improve the park, he was there with his Boy Scouts – and his young daughter, Laura Wolff Morris, who would one day head the park conservancy – to get rid of privet and other pervasive non-native species.

Long before the public understood there were better options for a road through the park and there needed to be more attention to water protection, he was talking about it.

Long before there was widespread concern about the impact of sprawl and car-centric development, he was sounding the alarm.

In other words, Art was always ahead of his time.  He died Monday evening at the age of 90.  Memphis is richer and our community is better because of him.

Art Wolff is a pain in the neck.

As he once put it, he set out to be one and he’s gotten awfully good at it.

For almost 35 years, he has upbraided mayors, disabused city and county engineers of any notion that they are godlike and lived the life of a pariah at hundreds of public meetings he attended.

But last Friday, he sat in the audience and led the applause as his beloved Shelby Farms Park finally was preserved once and for all for future generations.

It was a long time coming, but the anticipation only made the satisfaction sweeter, he said. The lesson to the rest of us: sometimes it is the rebel, the squeaky wheel and the in-your-face advocate who is a key in making something historic happen.

For him, it all began in 1973 when Shelby County Government announced plans to use a 4,500-acre tract of public land at the heart of the Memphis region for a planned development. The outcry was immediate, and in time, county officials backed down after a firestorm of criticism, saying that the land would be “set aside for public use.”

In the ensuing years, that “public use” included proposals for a zoo, a golf course and conference center, baseball stadium and community college; for selling off some of the land to pay for park development and for running a major highway through the heart of the park. Every time, Mr. Wolff was there leading the opposition, ratcheting up the heat, and demanding for the land to be protected.

Today, about 3,000 acres is largely as it was in 1973. About 1,000 acres is being used by Agricenter International, which signed on to the conservancy agreement and maintains control of the area earmarked for agricultural research and as a showcase for innovation.

Sitting in the audience Friday with fellow elderly activists, Ken and Lois Kuiken, Mr. Wolff understood it was a day for dignitaries and speeches. To some in the room, it was also a day to celebrate a fact of life about cities that is too often forgotten – one person can still make a difference.

In what seemed a direct response to questions asked by Mr. Wolff and others since the mid-1970s, Shelby County Mayor A C Wharton said: “Today is about more than the signing of this important conservancy agreement. More to the point, it’s county government’s answers to two questions first asked 34 years ago and every year since.

“Today we deliver two answers: One, Shelby Farms Park is now and forever preserved and protected for all future generations of this county, and two, through this conservancy, Shelby Farms Park will be transformed into one of America’s great urban parks.”

Effective August 1, the newly formed, 34-person Shelby Farms Park Conservancy will take charge of the operations, management and leadership of Shelby Farms Park. The nonprofit group will lead the development of a masterplan of national importance and will raise local and national funding to implement the plan, and it will operate all concessions, set all fees and make all decisions about the parkland. In addition, Shelby County Government agreed to keep its funding at its current level.

History In The Making

Success on the conservancy was a major victory for Mayor Wharton’s style of leadership, the quiet influence of the Hyde Family Foundations on all things Memphis and the grassroots group, Friends of Shelby Farms Park, that morphed from an anti-everything organization into the platform for a new organization, Shelby Farms Park Alliance, that built consensus for the new direction for the park.

An earlier effort – in 2002 – had failed after it turned into a political controversy more related to old political grievances than the merits of the actual proposal. Bruised and beaten, advocates for protecting the park regrouped, developed a new plan of action, recalibrated its message, communicated its vision and slowly and methodically put together a new collaboration of supporters over the past four years.

There were milestones of progress as the pace quickened in recent years. The highly intrusive plans for the highway through the park were scrapped, replaced by the area’s first context sensitive design committee appointed by Mayor Wharton. After about a year of give and take, the committee produced a new road recommendation that balances transportation and environmental concerns.

Building on that momentum, after decades of resisting a conservation easement for the park, county government signaled its interest in an agreement between key players at the park, and an easement was approved last December. The newfound optimism was warranted, because on March 26, the Shelby County Board of Commissioners – led by Commissioner Mike Carpenter – overwhelmingly voted in favor of the conservancy.

First items on the conservancy agenda are to hire someone to lead the master planning process and to hire staff for the new organization. Faced with the opportunity to convert a black canvas of 3,000 acres of parkland into a great urban park, there should be no shortage of interest.

Mayor Wharton said that over the past four years, time and time again, the right person emerged at just the right time to move things ahead. As he spoke, it was hard for us not to think of Laura Adams.

Over that time, as progress was often measured in inches, small victories and the change of a word in an official document, she worked skillfully as president of Friends of Shelby Farms Park. Quickly, she became known for her diplomacy, persistence and commitment to success.

In time, her explanations about what could be accomplished at the park were taken up by every one involved, and in time, she convinced her members that there was a better way to succeed than the regular confrontations which had defined the group for decades.

To prove her point, she convinced the members to shift gears and she guided them to a more modulated attitude, reaching for compromise and ultimately, becoming a totally different, more business-oriented organization, the Shelby Farms Park Alliance, where she was named as executive director. That group now disbands and give the Conservancy its support and help.

In truth, she was another contribution that Mr. Wolff made to protect the park. After all, Mrs. Adams is his daughter.

Great Parks Are Made And Great People Make Them