“This sure is one tough city.”

We were driving a visitor to Memphis from the airport to downtown.  We hadn’t said a word about crime or public safety at all.

The comment was triggered by the Memphis obsession with razor wire.

Of course, when the Shelby County Sheriff’s Department puts up razor wire to protect the cars in its parking lot east of downtown’s ugliest building, the Criminal Justice Complex, we might as well add a sign out front: “This is one tough town.” 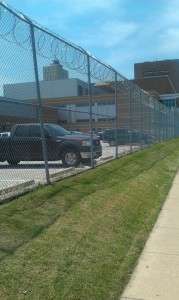 Then there is the razor wire protecting an entirely empty lot on Union Avenue west of Danny Thomas Boulevard.  When a property owner has to protect a bare lot to keep it from being stolen, you know things are tough. 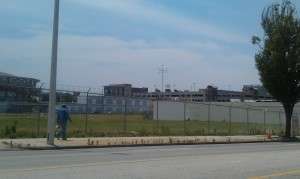 We kept our guest away from Hollywood and Poplar, where razor wire protects the concrete statues at Rachel’s Flower.  We thought if he saw that, he might ask to be taken immediately back to the airport.

The comment about Memphis being “one tough city” was about the intuitive city, which is what we call the gut feeling that you have about a city before you’ve even learned anything about it.

We think of knowing how cool Austin was going to be before we got out of its airport with the Texas retail kiosks selling Texas products and the Austin-related public art.  We knew it from Portland as we walked to our hotel and stepped over manhole covers designed by various artists.

In other words, before we are consciously forming an opinion, we are already deciding that this is a city that “gets it.”

We’ve written often about the need for a serious design ethos in Memphis, but it would be progress if we could work on getting the intuitive city right.

To that end, here are some pertinent comments made about yesterday’s photo and post about city government’s plywood answer to a broken grate on Main Street.

“Can I ask a personal favor of one of the contractors who have been awarded sewer work this year… Can you just do us a favor and make a civic jesture by figuring out how to get the fountains back on? I’ll find a 501c3 for you to invoice and we’ll write it off as a tax deductible contribution. It’s 100 freakin degrees and sunny, the civic center fountain should be on.

“Can I ask a personal favor of one of the contractors who have been awarded curb & road work this year… Can you just do us a favor and make civic jesture by figuring out how to replace the mall pavers with something other than plywood? I’ll find a 501c3 for you to invoice and we’ll write it off as a tax deductible contribution. It’s tourist season and the main downtown thoroughfare shouldn’t look like ass.

“Downtown should be a high concentration tax revenue generator, the global identity for our region and the target for future development opportunity. If our government isn’t going to care, I’d hope our corporate community would. At least the ones getting a little business from government work?”

“I’ve been watching the spot shown in the photo slowly grow over the course of the summer. Several mornings have included a work crew of 3 to 4 individuals. Perhaps the nature of the problem is still eluding them after these many months just as the nature of the demolition work on Madison seems to be beyond the ability of that particular owner/contractor.”

“Perhaps we could borrow the golf tourney’s old scoreboard and put it up across Madison. We could keep a running total of how many months/weeks/days that segment of road is closed. We could calculate the interest payments on that $2 million section of trolley and regularly update that. Or we could rank all of the dumb obvious improvement projects that should be priorities.

“Maybe if we celebrate our faults, we will grow to love them!”

“I propose that we begin a photographic project on key design and repair issues, particularly downtown, and see if we can get some attention to the need for some standards of quality and reasonable action. We can take photos over time to document problems and to track actions to fix them.”

Density and Housing: Good for Each Other

Punk Rock and the New Urbanism: Getting back to basics

Designing a City That Loves Itself