Aerotropolis: City of the Future?

We are, you might like to know, probably doomed. At least those of us who live in Britain are. This is because, in the 21st century, efficient, large, well-connected airports matter to prosperity above everything else. “The fastest, best-connected places will win”, and the future belongs to the “city that can see the writing on the wall before the competition can even see the wall”. While China is roaring away with $250bn of investment in airports, London finds the efforts to improve its infrastructure mired in environmental opposition, political indecision and local special interest groups. And, with London, so goes the entire UK economy.

So, almost, says John Kasarda, travelling preacher for the concept of aerotropolis, the idea that a new type of city will and must appear, where “the airport is not at its periphery but at its core”. He combines a professorship at the University of North Carolina with writing books and articles on the subject, with a consultancy advising regional and national governments how to direct their billions to the achievement of their own aerotropolis. Boris Johnson has declared his enthusiasm for the idea, and Kasarda reciprocates his passion: “I find the mayor of London extremely visionary. He has his finger on the pulse. He has a dramatic style, but he’s a very wise man.” 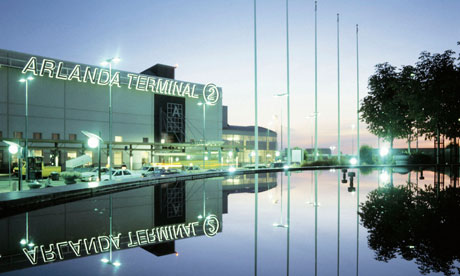 As airports grow, argues Kasarda, they become more city-like. The shopping zone of Indianapolis International, he says, “really gives the feeling” of a town square. There are 6,000 weddings a year at Stockholm Arlanda, the Rijksmuseum exhibits art in Amsterdam’s Schiphol, and the London Philharmonic is performing at Heathrow. “If you want to see the future,” he says, “look at the Squaire” – a sleek, glassy slug in Frankfurt where KPMG has moved some of its operations, on the basis that it is only a few minutes’ walk from workplace to check-in.

The Squaire, an office building inside Frankfurt airport: ‘minutes’ walk from workplace to check-in’. Photograph: Alamy

Kasarda’s favourite examples of an aerotropolis are Las Colinas, Texas, which is handily placed for Dallas Fort Worth and “hosts four Global Fortune 500 headquarters”, and New Songdo, a development built (with advice from Kasarda) near Incheon airport in South Korea. Also, Dubai, “an airport with an emirate attached”, and Singapore, whose growth has been assisted by its impressive airport.

He shows a plan of an ideal city, with runways at its dead centre and “aerolanes” connecting such things as “E-fulfilment facilities” and a “medical and wellness cluster”. This city is shown as being built on virgin greensward, a site very unlike London, which already has a large number of buildings and services, and people who might resist relocation. Kasarda calls the existing fabric “sunk cost”, which roughly means “money down the drain”, before acknowledging that they might have some value: “You can’t get rid of it, so you have to leverage it as best you can.” 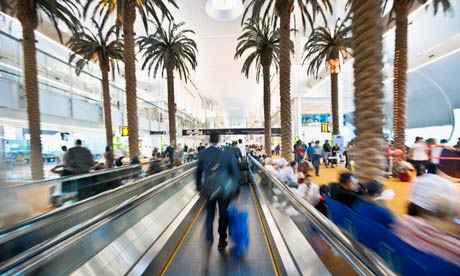 Dubai International, ‘an airport with an emirate attached’. Photograph: Corbis

Kasarda is right that international air travel is a growing force, and that London will suffer if it fails to find an intelligent response. But, as currently described, aerotropolis is chilling: a model of a city driven by a combination of business imperatives and state control, with the high levels of security and control that go with airports. Under the dictatorship of speed, individual memory and identity are abolished. An airport shopping mall is, actually, not like a town square, for the reason that everything there is programmed and managed, and spontaneity and initiative are abolished.

There may be palliatives. According to Kasarda’s 10 points for planning aerotropolises, “thematic architectural features, public art and iconic structures should make aerotropolis developments interpretable, navigable and welcoming”. New Songdo includes a Jack Nicklaus golf course and areas modelled on Venetian canals and Central Park. But, according to sociologist Richard Sennett, it’s a “stupefying” place where “there is nothing to be learned from walking the streets”.

Nor are airport cities precisely pure expressions of the market, as some 19th-century railway towns were. The South Korean government has invested heavily in New Songdo, which has yet to prove that it will be the humming metropolis promised by its makers. Of the plan to build a new airport in the Thames estuary, Kasarda tells me that “most airport transportation connectivity will need to be based on public funding, and this will be expensive. I know of no significant commercial airport that has been privately built that had not received substantial public funding support, at least indirectly.”

The deal, in other words, is this: taxpayers would be expected to pay handsomely for an environment created almost entirely to serve the needs of business. If they don’t, as Kasarda says of a Britain without enhanced airports in London, “the city and nation will become markedly weakened in the coming decades”. And if the public does foot the bill, the bet might not pay off. “The Thames estuary airport is a high-risk but potentially very high-return option,” says Kasarda. In other words, the taxpayer might be asked to stake billions upon billions on something that may not work.

When London meets aerotropolis, it is quite a face-off. If the game is simply to see who can build airports (and eve rything that goes with them) biggest, fastest and most efficiently, then London, which carries the baggage of history and democracy, cannot beat Asian cities. On the other hand, London has qualities to which the aerotropolis idea adds little value, like an existing fabric that works and gives pleasure and affords space for the accidental (including the colossal and largely unplanned success, over the decades, of Heathrow). The evidence of property prices, and of international investment, is that these things are worth quite a lot.

London can never afford to be complacent – not least about the current state of its airports – but the aerotropolis idea offers a too simplistic view of cities. I hope that Boris Johnson understands.