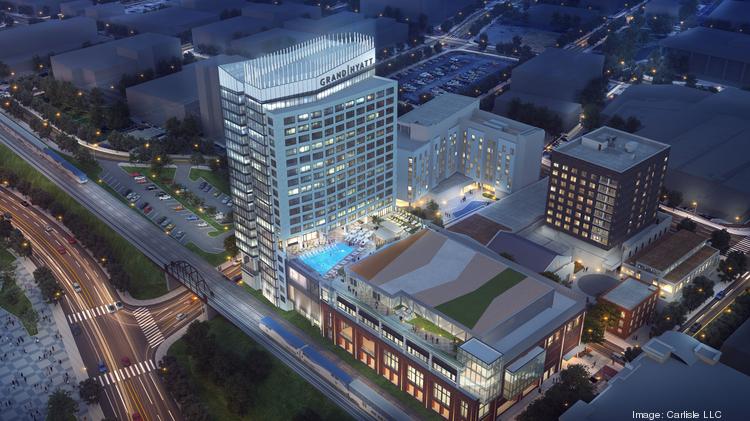 Memphis has for decades longed for a full-service luxury hotel with a flag that has a national reputation for excellence and quality.

That’s because it would be a key piece in elevating Memphis as a convention city and branding the city as important enough for a coveted chain to have its most preeminent brand in the city.

It would be an encouraging statement about Memphis and its importance – and its future – as a tourism and convention destination.

That’s why the Grand Hyatt is crucial to Memphis.

The Grand Hyatt will arguably be the best luxury hotel in our community.  Positioned in a cluster with two other Hyatt branded hotels, its prominent location on the riverbluff overlooking what will be the most spectacular riverfront park on the Mississippi River ensures that it will become an icon for Memphis.

It also gives Memphis bragging rights. There are only about a dozen other Grand Hyatt hotels in the U.S., and they are located in high-profile tourism destinations like San Francisco, San Diego, Washington (where I have stayed) , New York City, Denver, Vail, Tampa Bay, San Antonio, and Seattle.  And now there is Memphis.

Memphis Tourism chief Kevin Kane extols the importance of the hotel in improving our convention business’s competitive position following the $200 million upgrade of the convention center.  “We desperately need that hotel,” he said, adding that the convention center has an agreement for a block of several hundred rooms at the Grand Hyatt.

Although the Grand Hyatt – and its two Hyatt companion hotels – aren’t immediately adjacent to the convention center, the trolley system in front of the hotel offers an important connection for conventiongoers and the hotel will moor one of the city’s most important addresses at the western end of historic Beale Street, and one traveled heavily by tourists on foot.

The more than 20-story Grand Hyatt is part of the One Beale development, an emphatic vote of confidence by Carlisle Corp. in the future of their hometown.   One Beale transforms 5.5 acres on the bluffs into a $400 development that includes 227-room Hyatt Centric, 136-room Caption by Hyatt, 350-room Grand Hyatt, 232 apartments at The Landing Residences, 15,000 square feet of Class A office space, eight full-service restaurant and bars, and a 465-car garage.

There are complaints that Carlisle Corp. has received significant tax incentives, but then again, it’s a significantly important project for Memphis with its potential for dramatic impact.

Maybe Chance Carlisle, CEO of Carlisle Corp., should have moved his company from his hometown to some place like New York City.  It seems that we are willing to welcome out-of-town hotel developers with open arms, similar incentives, and without the personal invective.

It’s reasonable to ask if the Grand Hyatt received excessive incentives.  It’s also reasonable to ask the impact of losing it.  Memphis could not afford for the construction of this hotel not to happen for a variety of reasons, so doing whatever it takes to make sure it is built is in the city’s best interest.

I have written blog posts for 17 years criticizing the way PILOTs (payment-in-lieu-of-taxes) have become entitlements rather than incentives.  However, I have never been in favor of abolishing all tax incentives because some are the right things to do in light of their importance and in the context of time and place.

Getting one of the hotel industries most luxurious brands – the Grand Hyatt – into Memphis was just one of those right decisions at the right time.

Some people act like there is no risk to the Carlisle Corp. itself although it is betting heavily on One Beale – and on Memphis.

For the Carlisle Corp., it is a decision based on more than spreadsheets and cash flows.  The decision is also motivated by the commitment to fulfill the vision of the late Gene Carlisle, founder of the firm and patriarch of the family.  It was Gene Carlisle who always foresaw the location as the site of a dramatic development that could define the skyline of the downtown he loved.

Gene Carlisle died in 2015.  He was 72 years old.  His dream for the One Beale site began in the 1970s with Beale Street Landing when he adapted an old, existing building into restaurants and boutique shops.  It did not survive, but Mr. Carlisle was undeterred.  He believed in downtown when people discounted its future and even scoffed at his big plans.  To any doubters, Gene Carlisle responded with his trademark smile, laughter, and good cheer, but without ever diminishing his fearless belief in what the site could be.

As The Daily Memphian reporter Bill Dries wrote in 2008, Mr. Carlisle called the location “the best piece of dirt in Memphis.”  By then, he had a $200 million vision for twin towers with one-million-square-feet complex with a resort, hotel, office building, and condominiums.  That concept would evolve into the present development with its critical mass and concentrated impact from about 800 total hotel rooms.

The websites for the two Hyatt hotels already opened say volumes about the Carlisle Corp.’s attitude.  They spotlight the city almost as much as they do about the hotels themselves.  It means that the Hyatt hotels will also be marketing Memphis and support existing Memphis Tourism marketing.

A key part of the hotels’ success will be its national and local positioning and that’s why it needs a healthy marketing budget.  That’s why it invests in things like the sponsorship of the Cutbank Bluff, the ADA-accessible route from the top of the bluff in front of the Hyatt hotels to the Tom Lee Park, improved from a barren 30-acre pasture into a nationally important riverfront park.

It’s a smart marketing move, introducing and affirming its brand to guests of its hotels as they make their way to the new and improved riverfront and introducing their brand to thousands of visitors to Memphis who’ll travel the new route.  Most importantly of all, it will be traversed by Memphians, particularly those who live six blocks away in South City and in the 38126 zip code.

There are the inevitable critics who labor to connect the $10 million loan from City of Memphis to the Carlisle Corp.’s pledge of $1.5 million for what is now called the Carlisle Cutbank Bluff.  The city’s loan at 10% is repayable through lease payments made on its PILOT incentive.  The Center City Revenue Finance Corporation will act as the pass-through for the incentive.  If the hotel is refinanced, the loan must be repaid immediately.

These people assume the pledge is being paid from the City of Memphis money, but they don’t understand how pledges work or how marketing money is different from financing and operating funding.  For a hotel or any tourism-related attraction, marketing money is to be prized and invested carefully to strengthen and elevate its brand.

In other words, suggesting that a multi-year commitment should be shifted instead to the financing for the Grand Hyatt is short-sighted, because a lack of marketing money can ultimately be felt negatively on the hotel’s bottom line, which in turn, decreases its benefits to Memphis.

And those benefits, according to an economic impact report, include 554 permanent jobs with an average salary of $58,241 and more than $200 million in taxes and fees from room rentals over 30 years.

In other words, this is more than just another hotel project.  It’s a hotel that sends a clear message to the rest of the country at a time when Memphis badly needs positive news.  Also, the Grand Hyatt is essential for the success of the renovated convention center and gives Memphis the opportunity to stake its claim to being a city that deserves to be in the league of some of the country’s most celebrated cities.

How to Fire Your Airport Manager