We wish we could get excited about the latest big tax freeze – this time to Cargill.

The truth is that we might force some excitement if we ever got even a hint that someone somewhere sometime talk about how to wean us from giving money so people love us.  We’ve talked for 20 years about workforce challenges and rather than get desperately serious about this issue, we continue to use it to hand out payment-in-lieu-of-taxes (PILOTs) to just about anybody capable of filling out the application.

In addition, there’s just too little real negotiation or checks and balances built into the PILOT  program.  And the assertion by the head of the city-county office of economic development that “we’re getting much more back in taxes than we’re giving up in taxes” is true if you are prone to believe the funny math used by the Industrial Development Board to justify their drunken sailor’s attitude toward tax freezes.

This time, the IDB granted an eight-year tax freeze that saves the largest American, privately held, multi-national giant $11.5 million in taxes.  Just to keep things in perspective, Cargill’s revenues are $108 billion a year.

In other words, Cargill gets more in revenue every hour than the total eight-year tax freeze, but taxpayers are supposed to believe that this $11.5 million was really pivotal to their staying in Memphis.  The truth is that for many of these international behemoths, tax freezes are merely lagniappe.

But that’s our opinion, and that’s the problem.  All we have are opinions.

None of us really know if the tax freeze was the determinant in the ultimate decision of Cargill because we’re almost back to the days when the IDB saw itself essentially as a vending machine for PILOTs.  We were already giving away too much, often for low-wage jobs, and now a new rule waives taxes for existing companies with no increase in employees if they threaten to leave.

Cargill was a prelude to a chorus we should get used to.  It’s the justifications – like Cargill’s – that treats their location here as little more than a grave inconvenience to their corporate mission.   Cargill opined that Memphis is too far from the nation’s Midwestern corn belt  to justify staying in Memphis, where it’s been since at least 1943.  If this were the case, would $11.5 million really compensate for it?

Time for Plan B

There are also questions about Cargill turning its head to human rights abuses and other issues in some of the 67 countries where its 160,000 employees work at 1,100 locations, but these questions aren’t considered relevant in the IDB evaluation.

From our perspective, Shelby County Commissioner Steve Mulroy raised the right concerns when he pointed out that it’s next to impossible to determine if there’s a real risk that a company will move if it doesn’t receive tax breaks.  “It seems to me the ‘but for’ causation analysis will always end up being a lot trickier for retention PILOTs than the other PILOTs,” Mr. Mulroy said.  “… We basically accept the PILOT recipient’s statements at face value. They say, ‘If we don’t get this we may leave.’  Applicants should be asked many questions about the “but/for causation issue, why it’s necessary?”

Here’s the main thing about PILOT’s: We could perhaps be more willing to tolerate them if there was even a whisper that economic development officials are trying to create context where success is defined by how few tax freezes are handed out, not by how many.  That’s treated as a revolutionary notion in our current economic development policies.

Successful cities in the knowledge economy are selling themselves on the basis of quality.  We continue to sell Memphis on the cheap.  For almost six years on this blog, we’ve been asking if there is a plan to move us from the cheap category to the quality category and if there is a plan to reduce our overdependency on tax freezes.

We asked it when we were the first to report that Memphis and Shelby County gives away more tax freezes than all the other large urban counties combined.  We asked it when the city-county’s own consultants reported that the IDB procedures were badly flawed and that reform of the program was temporary at best.  We asked it when professors and Forbes criticized our tax freeze program as counterproductive and illogical.  We’re still asking it.

It was the city and county’s own consultants who called for major overhaul of the program in its 97-page report issued December 1, 2005. Even then, it took more than a year for local government to get around to reforming the PILOT program, which has always been more about real estate than economic development.  It probably took about the same period of time for government to default to their tax redistribution program.

We’ve heard a lot of comparisons between our community and Nashville lately, and here’s another one: While we’ve tried to give away the store, decades ago, Nashville decided to send a message about quality government, quality of life, and quality of public investments. It set out to execute “quality strategies” that make it today a magnet for college-educated 25-34 year olds and skilled jobs. It identified key public investments to make this happen, and because of it, today, Nashville is fighting Charlotte as the South’s #2 city (behind Atlanta).

Memphis took another road. It was rooted in “old school” economic development that sold our city on the basis of cheap land and cheap labor. Ultimately, what we’ve learned is that throwing money at companies to convince them to love us is not only poor public policy, it is also counterproductive, stimulating a shift in the tax burden and increases in taxes that choke off the small businesses and the entrepreneurs who create most of the new jobs in the first place.

In his comment, Commissioner Mulroy referred to the city-county consultants’ recommendation for awarding PILOTs as the result of a ‘but for’ evaluation to determine the true economic need of the project.  This “but for” test was straightforward and encouraged good stewardship of scarcer and scarcer tax dollars. The consultants define “but for” as a business investment that isn’t reasonably expected without the public tax freezes, and it can be proven by a “gap analysis, a competitive cost analysis for competing sites, or a combination of the two,” the report states.

The establishment of a ‘but for’ test is the whole premise of any public investment or the need for it from a logical, moral and legislative standpoint,” the consultants’ report said. “Most, if not all, business incentive programs across the country imply a ‘but for’ test in their intent and enabling legislation.”

On Smart City, Greg LeRoy, author of The Great American Jobs Scam: Corporate Tax Dodging and the Myth of Job Creation, said: “There’s a popular myth that’s promulgated by companies and their consultants and their public relations machines suggesting that tax breaks are responsible for companies locating or relocating or expanding. I think that’s just not true because all state and local taxes combined has a cost of doing business for the average company in this country of less than one percent of their cost structure.

“Tax breaks, therefore, comprising some fraction of less than one percent of a company’s costs can’t create markets, can’t drive innovation, can’t drive skilled labor. It’s really become a way for elected officials to take credit for things that are already going to happen in the market. And by letting these programs become so loose and allowing them to become pro-sprawl, we’ve also allowed these incentive programs to turn into things that are really harming our land use, undermining our public schools, forcing people away from transit…”

Mr. LeRoy suggests that programs like ours are in truth real estate development masquerading as economic development. “We hope elected officials look at the broader policy issues about how policies affect everybody paying taxes to the city, to the county, to the state, and what’s really going on is a burden shift in which companies that are foot loose, or threaten to be foot loose, are getting lots of other people to pay for their public services, because when a company doesn’t pay its fair share of the cost of public services it uses, everybody else either has to pay higher taxes or get lousier public services.”

Send Us Your List Of 10 Things You Love About Memphis 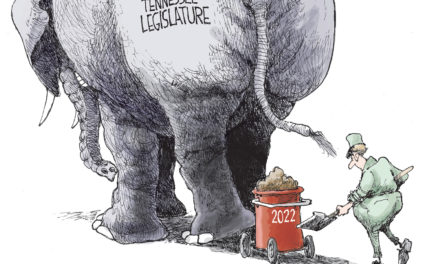