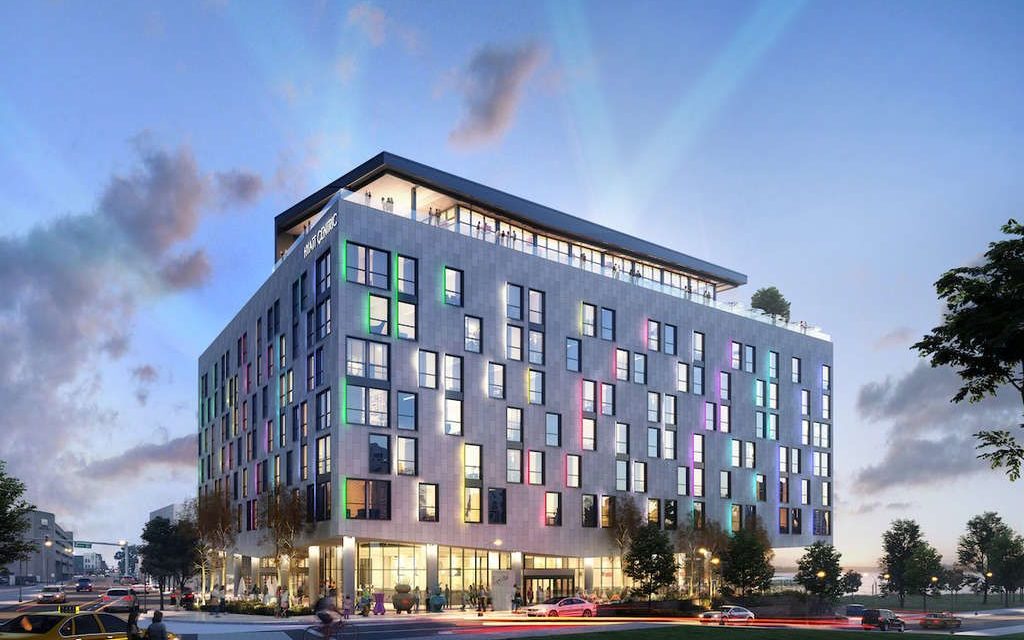 Thumbnail: Memphis wakes up from a year-long sleep and discovers a new city.  Hyatt Centric Hotel is a milestone that is hopefully a harbinger of more to come for downtown.

**
The perfect Saturday resulted in Memphis having its own Rip Van Winkle experience.

Rather being asleep for 20 years, Memphians awoke from their 13 months of being sequestered because of the pandemic.  And they awoke with a vengeance. They hit the streets and many were surprised by the new city they encountered.

Restaurant patios were crowded, parks were bustling, sidewalks were busy, and activity of all kinds was the name of the game.

Three years ago, I wrote that if all goes well, “after more than a decade of hyperbole, downtown may be poised to deserve it.”  That’s becoming true, and to top it off, new developments in the Edge and midtown create a corridor of new projects.

It seems that there are new hotels, new restaurants, and new apartments in all directions.  While we were sticking close to home for the last year, much of the construction continued and it’s as if some marquee projects changed from an idea to reality overnight.

The party last week at Hyatt Centric Hotel at One Beale seemed a milestone that ratified the message about a new downtown.  The hotel is a personal project of Chance Carlisle and it’s not possible to see it without thinking how proud his father, Gene Carlisle, would have been.  Gene Carlisle died five years ago this month at the age of 72.

The development is fulfillment of a dream by Gene Carlisle, who believed in downtown when people scoffed his big plans at downtown’s most iconic corner.  To any doubters, Gene Carlisle responded with his trademark smile, laughter, and good cheer, but without ever diminishing his fearless belief in what the site could be.

When all phases are complete, the Carlisle project will have transformed the south end of downtown with more than 700 rooms in three hotels and several hundred apartment units nearby. It’s a dramatic project, and wrestler Jerry Lawler’s incredulous ribbon-cutting participation notwithstanding, it is a high-quality hotel that hints at the significant impact the entire development will have on leveraging and branding Memphis’ primary entertainment district.

The hotel’s website speaks to the Carlisle attitude toward the hotel and to Memphis.  It spotlights the city almost as much as it does the hotel itself.

When the hotels are framed in the foreground with the transformed Tom Lee Park, this pivot point for downtown will undoubtedly become the iconic photograph that brands Memphis as progressive, moving ahead with self-confidence, and striving for the best.

Projects in the Pipeline

The opening of the Hyatt Centric Hotel should be a moment of pride for Memphians and Shelby Countians who have $100 million tax revenues invested in the $400 million development in the form of tax incentives.  The turnaround of downtown has taken 40 years and about $1.5 billion in tax breaks.

The three Carlisle hotels become even more crucial if the $250 million Loews Hotel is not built.  That hotel has its share of trouble signs and it was cold comfort that Memphis Tourism President Kevin Kane said its odds of being built are better than 50%.

If it never materializes, the hotel rooms in the Carlisle development essentially become the rooms needed to sell the recently renovated convention center for larger gatherings.  It’s likely that the hotel market here won’t rebound to pre-pandemic levels for at least another 18 months, and while Loews is already behind schedule, we’ll know relatively soon if city officials’ optimism is justified.

The Walk (formerly Union Row) seems to be slow-walking toward the future.  Its latest plan calls for it to start with the large building at Union and Danny Thomas, but rumblings persist that some additional changes may be in the works.  Confidence about its future is tied to developer Kevin Adams’ ability to deliver, and predictions are that more movement will take place by late summer.

That said, it’s always had better odds than the $1 billion redevelopment of the Pinch Historic District, but then too, so does the Loews Hotel project.

Memphis and Shelby County taxpayers have done more than their share.  All of the developments have significant tax breaks.  With some luck and a bounce back in the economy ahead of predictions, Memphis should win more than it loses.  And if that happens, the projects of the recent past, those under way, and those planned for the near term will be in enough adjacency to contribute to the better connected fabric that downtown has lacked since about the time Main Street was turned into a pedestrian mall in 1976.

In the intervening years, there were of course many twists and turns, milestones and misery, and the promise that this big project or that big project would be the magic answer to turn it all around.

At points in those years of decline, it was just as possible to imagine that downtown was fatally wounded and would never recover. There were some bright spots of progress but they were indeed spots – isolated islands of activity largely disconnected from each other.

For me, downtown’s road back began in earnest in 1995.  That’s when AutoZone built its headquarters on the riverfront and moved from East Memphis (where the main library for City of Memphis sits today).  It was a time when the assumption was that the city’s major employers would invariably move in the opposite direction.

The company’s more than 1,000 employees (now closer to 2,000) were of course a boost to downtown, but even more important was the example that AutoZone set for other corporations.  There were hopes back then that FedEx would follow suit but it took 24 years for a major presence by the company to come downtown (and by then, ServiceMaster had beaten them to it).

To put an exclamation point on AutoZone’s decision, Hyde Family Foundations, headed by AutoZone founder J.R. Hyde III, did the same and the company and the philanthropy became tireless cheerleaders for programs for revitalizing downtown.

A year before AutoZone opened, the concept of a livable, thriving downtown community by downtown visionary Henry Turley was coming into focus at Harbor Town.  By 1994, there were apartments and houses, and by 1998, he had added Memphis Yacht Club, a school, and the Harbor Town Square retail area.

While AutoZone was proving to people that it could be fun to work downtown, Harbor Town was showing that it could also be fun to live there. More to the point, they were proving that people were interested in working near where they lived.

None of this means there’s nothing little left to do.  Far from it.

There remain gaps of blight and disinvestment and streetscape that doesn’t ever seem to live up to what we see in other cities’ downtowns.  But, there is the feeling that the progress gives downtown its best chance of addressing the areas that have resisted revitalization for years.

Back in the 1980s, when the Memphis Jobs Conference rescued a collapsing Memphis economy with the creation of Memphis as a global logistics center and when Shelby County Government successfully set Japanese investment as a priority, attracting about 20 companies here, then county mayor Bill Morris often said: “if you can’t get excited about Memphis these days, you should check your pulse because you may be dead.”

For obvious reasons, that quote comes to mind these days.

Starting The Journey Toward A New Memphis

Three Guys and a Magic Marker