In light of questions to Archie Willis III about whether the transformational South City redevelopment is a “massive gentrification project,” we are reprising the following from April 25, 2016.  Mr. Willis heads ComCap Partners, a partner in the 882-acre South City project, and he is the son of one of Memphis’s legendary leaders, A.W. Willis Jr., civil rights lawyer, co-founder of National Civil Rights Museum, and the first African American elected to the Tennessee General Assembly since the 1880s.  The elder Willis’s daughter, Rosalyn Willis, veteran community development and revitalization leader, is head of the Memphis and Shelby County Community Redevelopment Agency after working in St. Louis for the firm of McCormack Baron Salazar for about 12 years.  Their father was one of my favorite people, balancing principles and passion to act as a change agent for Memphis when it most needed one.  We mention this because it is hard for us to envision that his son, who learned his values at his father’s knee, is not strongly motivated by the need to reduce poverty and has no tolerance for gentrification. 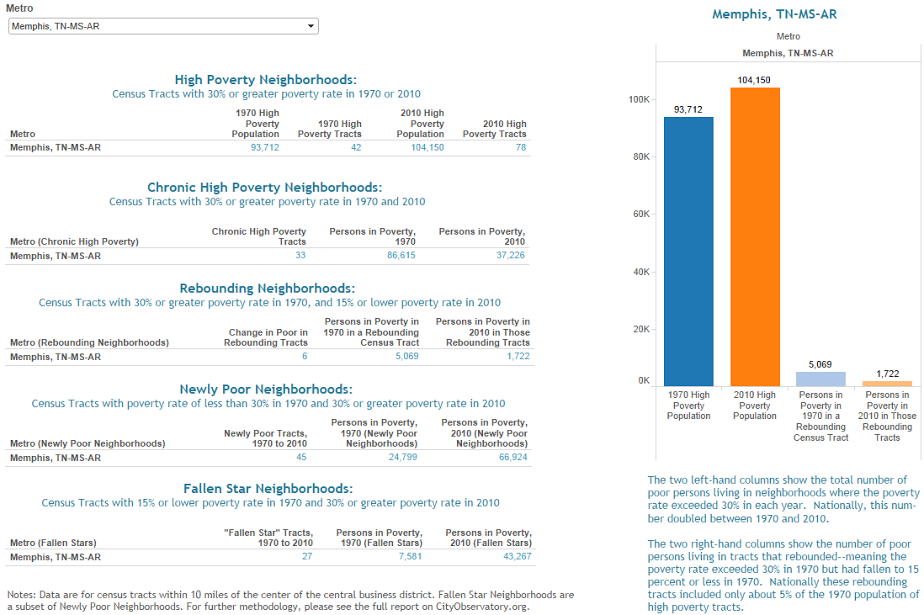 For us, the gentrification map by Governing magazine underscored the absurdity of the level of alarm that’s sometimes brought to this issue.  Its prime examples of gentrification in Memphis since 2000 include Uptown, a downtown area from Foote Homes to Shelby County Jail, EDGE/Medical Center, Soulsville, and Sherwood Forest.  For 1990 to 2000, the prime example is Harbortown, which is hard to imagine as a gentrifying project since nothing was there before it was built.

Like Governing, the authors fundamentally misunderstood the data within the context of South Main’s revival and drew the assumption that if more people moved into South Main, they were displacing people with lower incomes.

In December, Joe Cortright’s City Observatory report looked at the 51 largest metro areas, including Memphis.   He emailed: “We challenge frequently repeated narratives about the extent and impact of gentrification on urban poverty.  Tracking change through shifts in poverty rates, the report shows that there have been remarkably few instances nationally of gentrification in which previously high poverty neighborhoods have seen their poverty drop to below the national average.

In other words, while the number of high poverty census tracts almost doubled – 87%, the population only increased 11%.  It speaks to the historic level of migration out of Memphis neighborhoods, lured by the policies of county government that propelled sprawl and essentially required Memphians through their county taxes to pay for the decay of their own neighborhoods.

Knowing that hindsight is 20-20, it’s hard not to see the absurdity of the lack of action that characterized an era when the core city was deteriorating in such a fundamental way, while being hypnotized by rhetoric that called new developments outside Memphis as “growth.”  What we needed was a very specific strategy of interventions in neighborhoods that could make them more appealing for new investment.

It can be done now if we pick the neighborhoods where there are still some strengths and/or assets to build on and start there.

Or as Frayser Community Development Corporation head Steve Lockwood wrote in a March 6, 2015, Smart City Memphis blog post: “Yes, our problem is not gentrification.  Our problem is that many of our neighborhoods are too cheap, not the other way around.”