This Is No Time For Politics As Usual 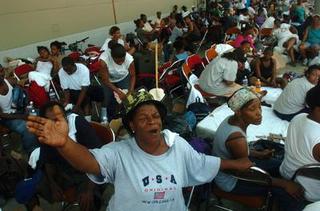 The Bush Administration proved again last week that it has a tin ear when it comes to poor Americans.

Beset by troubling and unrelenting questioning about whether the federal government’s bumbling response to Hurricane Katrina reflected racial insensitivity, the White House compounded its image problem last week when the president waived Davis-Bacon Act requirements for the massive rebuilding that will take place on the Gulf Coast.

Put more simply, President Bush issued a proclamation that suspended the law that would require employers to pay the local prevailing wage to workers on federally financed projects in the hurricane-affected areas of Louisiana, Mississippi, Alabama and Florida.

In a nation where 67 percent of all African-Americans say that governments’ response to Katrina was the result of racial bias, it’s almost hard to believe that the Administration could so cavalierly send yet another signal to them that their opinions are well-placed. Not only did the poor of New Orleans take a disproportionate burden of the devastation, but now, when they return to work on construction projects, they will be paid sub-par wages.

There are time when members of the Bush Administration, notably Karl Rove, are so cynically doctrinaire in their politics that it seems that no tragedy is too profound or any suffering too deep to prevent it from sending a Valentine to its political base. As Rove has said, his first law of politics is to keep the Bush political base happy at all costs. Time and time again, they have done just that. But in the midst of all the human misery on the Gulf Coast, this paean to the Right Wing and its opposition to minimum wage laws is appallingly obtuse.

Interestingly, the White House requires construction workers to take lower wages, but there are no constraints or conditions placed on contractors who will rake in the billions of federal funds spent on rebuilding the coast.

It’s worth remembering that George the First also suspended the same act after Hurricane Andrew, but it only lasted two weeks, since he was defeated by Bill Clinton, who ran for president on the grounds that “average Americans who play by the rules” were being punished by economic realities. After being sworn in, Clinton reversed Bush’s policies, the prevailing wage was paid, and somehow, the democracy survived.

At a time when the poor, especially African-Americans, feel isolated and marginalized by the economic policies of their own nation, feel that their families are being destroyed by federal social policies, and feel that special interests benefit from a permanent under class, the country deserved better than Bush delivered last week.

If the hurricane was not enough justification for a broader view by the White House, consider that last week statistics were released that showed that poverty in the U.S. is getting worse. The supply sider mantra that a rising tide lifts all boat is anything but true for the 37 million Americans living below the poverty line ($14,680 for a family of three). Meanwhile, the average income for Americans reduced…again.

Those who still argue that even more tax cuts are needed to stimulate the economy are clearly in the depths of denial. In the third year of the economic recovery, for the first time in 50 years, our country recorded an increase in the poverty rate.

Forty years ago, President Lyndon Johnson declared the war on poverty, and apparently, we lost. The poverty rate now is about the same as in 1968, although American has never been wealthier. In 1965, CEOs made 24 times as much as the average worker; that now stands at 185 times as much. The U.S. has the highest poverty rate if any developed country.

While no one was watching, poverty was removed as a national priority and put on the back burner, where it is now boiling over. The most positive thing that can happen as a result of Hurricane Katrina would be a renewed focus by the American people on addressing the entrenched poverty in our midst.

As Senator Barrack Obama said: “I hope we realize that the people of New Orleans weren’t just abandoned during the hurricane. They were abandoned long ago – to murder and mayhem in the streets, to substandard schools, to diplapidated housing, to inadequate health care, to a pervasive sense of hopelessness.”

In the past two weeks, the memories of the U.S. media have been jogged, and they have flashed signs of returning to the zeal that is the hallmark of an effective media. Perhaps, with their continued passion for covering substantive issues, the public emphasis on solving poverty will send an unmistakeable message to the White House that politics as usual is no longer an option.

The Potential Of Creative Industries: This Week On Smart City

Detroit: The Lessons of a Divided Society

Are Memphis and Shelby County "StormReady"?