Downtown Streets Can Be Great Public Spaces, Too 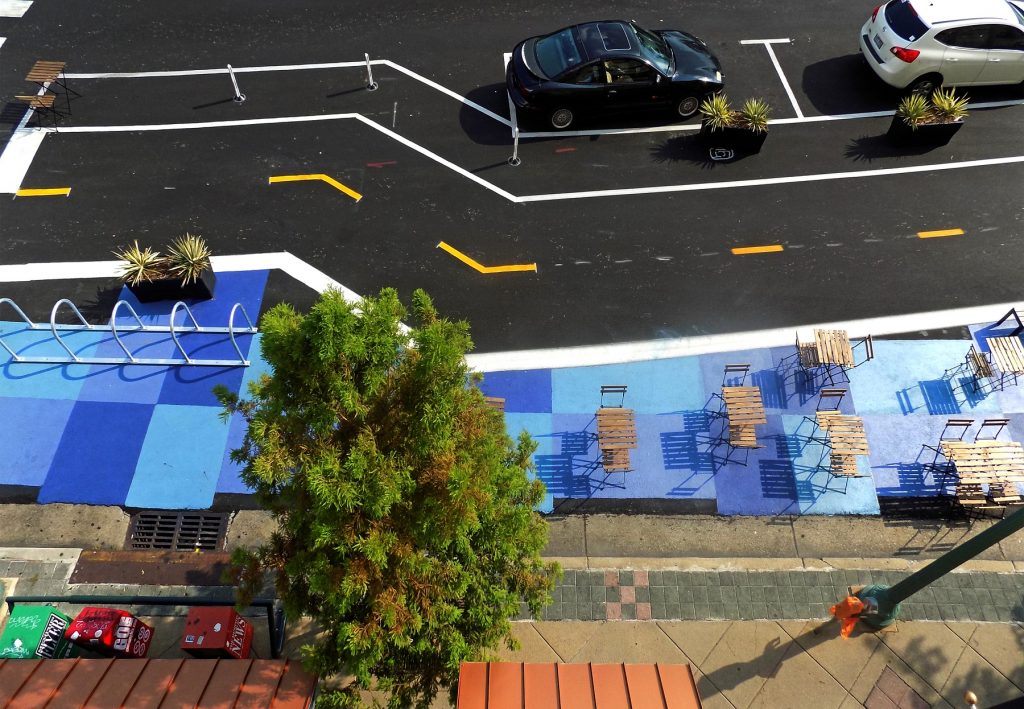 At a time when downtown’s future hinges on it being more livable, walkable, and bikable, we too often default to our car-centric view of public space.

We abandoned the Riverside Drive road diet and bike lane experiment before there was a chance to improve the engineering design and show how it could work.  We allowed a few people with loud voices to vilify RiverPlay, the pop-up space on Riverside Drive near the Visitors Center to the point that it likely discouraged the appetite for these kinds of projects to shift the public’s perceptions of a street’s purpose.

That brings us Peabody Place segment of Memphis’ Great Streets Pilot Project.  Despite the ballyhoo that greeted it, there are rumblings that its present design is in jeopardy because of complaints like the ones leveled at the popular RiverPlay temporary installation.

RiverPlay transformed four lanes of Riverside Drive into an activated urban space to acquaint more people with the two rarely-visited parks on each side of it. It embraced a sense of fun with a pop-up park that included shaded places to sit and talk, places to run, a roller skating rink, three half-court basketball courts, and local food trucks.

In other words, it was precisely what downtown needed to send the message that it was fun, cool, imaginative, and a place where we could expect the unexpected. The same can be said for the Peabody Place pilot project.

However, the signs are ominous.  A Great Streets stakeholder meeting was recently canceled, and it’s beginning to look like it’s a safe bet that the design will get worse as influenced by a few property owners who don’t understand that a people-centric design is in the long run a benefit to their businesses.

More to the point, it’s a benefit to the public space – with the emphasis on the public that owns it.

Once again, we run the risk of yielding to a lower common denominator while these kinds of great streets projects are transforming cities across the U.S. after being pioneered in New York City.   We have a tendency here to say that Memphis isn’t like any other city, and therefore, we can’t do what Austin, Nashville, that our problems are unsolvable, that livability is merely a noble concept that we can’t achieve, and that are too different to strive for a leading position in the movement to make cities more about people than cars.

The concept for the Great Streets Pilot Project is to create a new east-to-west mile-long corridor of protected bike lanes, pedestrian plazas, and interactive public art.  It would make the route more interesting and replace too wide streets like Peabody Place with more active, vibrant places. 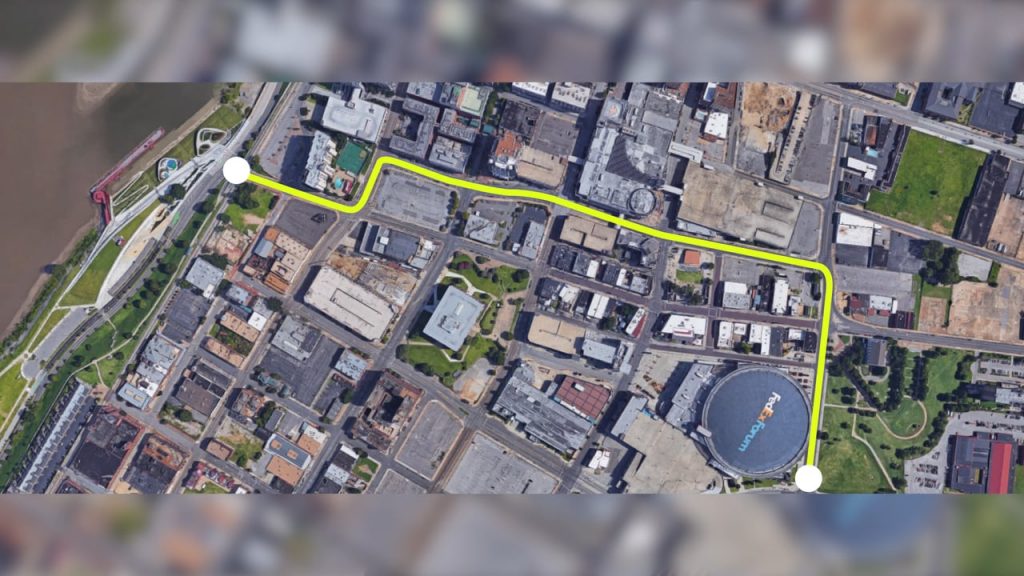 This was a chance to put Memphis on the map as one of the cities that are improving the design of its streets to make them more pedestrian-friendly, more bikable, more walkable, and with food trucks and popup art installations that make downtown unpredictable and energetic.

Memphis Great Streets Pilot Project attracted so much attention that Nicholas Oyler, Memphis bikeway and pedestrian program manager, just six weeks ago was asked to speak at the National Association of City Transportation Officials (NACTO).  The mission of the national organization is “to build cities as places for people with safe, sustainable, accessible and equitable transportation choices that support a strong economy and vibrant quality of life.”

As a member of NACTO, Memphis has the opportunity work with a group of major cities that have put a priority with public spaces that are lively, vital, and dynamic.  That its members include department of transportation, engineering department, public works departments, and public transit says volumes about how widely accepted the principles of Great Streets have been embraced across the U.S.

All in all, changes to Memphis’ Great Street Project before it’s even had a chance to prove its value raises the question of how all of this will be perceived by the national philanthropies thinking about funding projects here.  Already, some of them have bet $5 million in a “Civic Commons” program that they can make downtown and the riverfront more interesting and active, but the majority of them support a philosophy that produces ideas like RiverPlay and Great Streets are doing – showing that Memphis can reimagine downtown public spaces into something more appealing and urban.

Then again, we wonder about how receptive local foundations and partners will be to other projects if the Great Streets Project in the future bears little resemblance to its design in the past.   We also wonder if the people who attended the June meeting of the 2017 Professional Development Seminar of the Association of Pedestrian and Bicycle Professionals will feel that there has been a bait and switch.  Memphis has done an impressive job of coming from nowhere to get firmly on the radar as a biking city, but that positive word of mouth can be undone if this new reputation is not nurtured and strengthened.

In his report, 12 Modest Suggestions for Making Memphis Great, author and urbanist Jeff Speck said in May, 2008, that the “principle criteria of a safe and safe-feeling streetscape are small blocks; few, narrow driving lanes; two-way traffic; parallel parking; and street trees.  Every street in your community that you wish to attract pedestrians should satisfy all five criteria.”

As for Peabody Place, he said: “Many Memphis streets, like Peabody Place, have travel lanes of 14 feet or more.  These are highway lane widths, created for speeds of 70 miles per hour and higher.  Why are downtown streets designed for illegal speeds?  When a street is rebuilt, it should be made with 10-foot travel lanes to encourage non-highway speeds.  In the meantime, this change can be accomplished through re-striping.”

Fixing One Of The Worst Streets Downtown

Changes in street design are at first jarring for people – whether it’s a new expressway exist, a temporary barricade, or installation of a Complete Street, so it’s important to give people time to adjust and get familiar with the changes.

The Great Streets goal for Peabody Place – one of the worst downtown streets – was to create a new pedestrian promenade with areas for interactive public art elements, eating and drinking, lounging, and other activities, and to expose Memphians to the concept that streets can be a public space amenity.

And this is where the problem surfaces, because some property owners tend to treat streets as their property, rather than the public’s.  Businesses definitely should be part of any public process, but they shouldn’t have veto power over plans developed by the public and for the public, particularly when it comes to a street far too wide with surface parking on two corners, becoming a terrible terminus to the non-motorized portion of Main Street.

It is so much more enjoyable to walk on Peabody Place now, and hopefully, nothing will be done to disrupt the present design until Servicemaster employees are given a chance to enjoy it.

Getting Into the Game

Next year will mark the 10th anniversary of the Sustainable Shelby plan, the first regional plan for sustainability in the history of this community and inspiration for the Mid-South Greenprint Plan.  After a multi-phased process, a scientific poll, and a public engagement process, a list of priorities was set.  At the top of the list was the development of a “great public realm” and it specifically mentioned streets and plazas.

And yet, here we are, a decade later, still trying to resist the forces that prefer suburban design in Memphis’ most urbanized setting and value the generic over the distinctive, cars over people, and business as usual over smarter urban design.

Newer street designs are being tested and evaluated all over the world – and they are working.  Are we willing to admit that we can’t make a Complete Street work in Memphis?  If that’s the case, we should also admit that we are willing to accept every other old school idea that floats around here.

How will we activate the new pedestrian spaces?

Why retail design is important