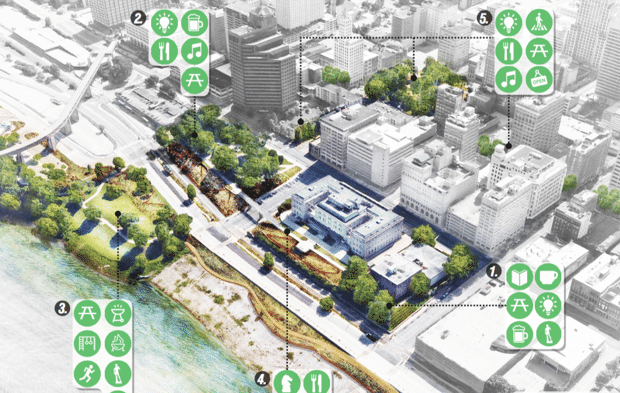 About 12 years ago when we began this blog, we lamented the fact that Memphis was not involved in national conversations or on the radar for philanthropic funding decisions to tackle urban issues.

Memphis’ location may have been good for logistics but camped out in a part of the country where it was separated by a couple hundred miles from the closest major urban areas and surrounded by fields and rural towns, we lacked the kind of competitive rivalries found in other areas.

But more than that, city government, over 20 years, demonstrated little interest in national meetings and discussions exploring new urban strategies – which often put cities on the radar for philanthropic funding.  In fact, Memphis mayors for two decades rarely even attended the U.S. Conference of Mayors conferences.

It’s one of the reasons that Memphis challenges languished without the injection of new ideas and smart thinking that could disrupt trend lines.  As a result, a 1980 map showing the c-shaped Memphis areas of concentrated poverty looks strikingly similar to one in 2005.

Getting In The Game

Fortunately, some Memphis-based philanthropies stepped up, but missing was the involvement – if not interest – of national philanthropies with deep, deep pockets.   That began to change when A C Wharton was elected mayor of Memphis and it continues with Jim Strickland.

As a candidate, Mr. Wharton called for greater involvement at a national level and pledged a greater pursuit of federal and philanthropic funding.  Once in office, he followed through, becoming a regular participant in convenings of the Obama Administration, in meetings of the U.S. Conference of Mayors, and in reaching out to national foundations.

In addition, it was a priority for members of his city administration, notably Douglas Scarboro, Kerry Hayes, and Maria Fuhrmann, who, in his stead, remained in contact with national organizations and developed an unprecedented focus on policy.

There is a number of examples of their success, but chief among them was Bloomberg Philanthropies grant for the Social Innovation Fund which emulated a New York City program using cash incentives to encourage positive behaviors by families in poverty.  That set the stage for arguably the pivotal disruption in turning around city government’s national positioning: a $4.8 million grant in 2011 to create the Mayor’s Innovation Delivery Team (now Innovate Memphis).

Headed by Doug McGowen, now Chief Operating Officer for Mayor Strickland, and with a supporting cast that included Tommy Pacello, now president of Memphis Medical District Collaborative, the Mayor’s Innovation Team operated outside of City Hall but was instrumental in setting a more ambitious agenda for the city administration.

Best of all, they were willing to push the envelope and ask impertinent questions, to bring in national authorities to help answer them, and to apply the answers, when possible, to solve an important Memphis challenge.  While it wasn’t always able to implement its entire agenda, it was able to shape the conversation in ways that inspired changes in the direction and the agenda on issues like performance management, neighborhood business development, smarter growth and investments, Complete Streets, tactical urbanism, and economic gardening.

Just as valuable was the Innovation Team’s ability to propel the work of other organizations working in complementary areas like livability, economic opportunity, and better transportation and give them a bigger megaphone to advocate for their causes.

If Bloomberg Philanthropies was a milestone in Memphis’ campaign to become nationally relevant, the second milestone was the entry of the $3.5 billion Kresge Foundation.  Less prescriptive than Bloomberg Philanthropies, its emphasis was more about Memphians shaping their own destinies and inspiring more local social entrepreneurship.  In three years, Kresge Foundation has invested more than $2.5 million in Memphis organizations.

Led by Mayor Strickland, Mr. McGowen and Ms. Fuhrmann and supported by Keenon McCloy, director of the city library system, the Civic Commons project promises to activate a moribund part of the bluffs that should be a major selling point for downtown’s vitality.  Some preliminary ideas were submitted as part of the application for funding.

Other cities chosen for the funding were Chicago, Detroit, and Akron.

The philosophy behind the Civic Commons was defined by Carol Coletta, Memphian working as Senior Fellow of American Cities Practice at Kresge Foundation.  It is based on the theory that in stitching together underused public assets, cities are doing more than mending broken connections; they are in fact creating a new civic fabric.

It’s hard to imagine a place that is a better test case for this program, and hopefully, it will inspire a more ambitious vision for the entire riverfront so that it symbolizes the city we want to be more than just the city we once were.  This does not mean complete abandonment of the founders’ promenade concept, but it does mean that there are practical, pragmatic ideas to make the riverfront more vibrant.

After all, almost everyone who visits Memphis finds their way to the riverfront, and if we are going to claim that we are entering an exciting, vital era downtown, the most visited public place must convincingly send that message.

But we digress.  We were talking about the Kresge Foundation, and it has made another announcement that indicates its continued support for Memphis and how the lessons learned in Detroit can apply here.

The latest announcement is for a special grant program for Memphis “aims to accelerate opportunity for city’s residents with low incomes.” It’s an exciting opportunity for dozens of organizations here.  After all, Memphis probably has more groups per capita battling to reduce poverty and increasing opportunity than any city in the country.

According to Kresge’s website, it is primarily looking to make investments in organizations working in arts and culture, community development, education, health or human services across four categories of approaches

1.  Supporting the articulation of community priorities to inform decision-making;

2.  Determining plans for action at the community level;

3.  Enhancing the capacity for transformative change at the community and/or city level, and

4.  Strengthening neighborhoods and systems of opportunity.

The schedule and process for the grants begin with a webinar tomorrow and end with grant announcements June 12, 2017.

Ms. Coletta said: “The Memphis-only portal – the first of its kind for Kresge – is a statement that you don’t have to know anyone at Kresge to get an idea in front of its program staff.  It also shows enormous respect for the quality of work in Memphis.  I am excited to see the good ideas I know will be submitted.

“Kresge’s interest in Memphis is born out of the foundation’s experience in Detroit.  Kresge’s impact there was so broad and so deep that the foundation wanted to apply what it learned in a city with similar demographics.  It is a huge opportunity for Memphis to attract new resources, gain new knowledge and connect to important new networks.  It also positions Memphis to showcase some of its excellent work nationally.”

No other national foundation has shown more interest in Memphis.  Kresge’s board has met here; key staff members have visited and met with influential grassroots leaders; Eric Robertson, president of Community LIFT, Reid Dulberger, president of EDGE, and I were invited to provide an overview to staff members in Detroit, and Rip Rapson, Kresge Foundation President and CEO, had a two-day listening tour in August when his public comments foreshadowed the Civic Commons grant and provided some seminal advice for Memphis.

No foundation had a heavier lift than Kresge in Detroit.  It has battled through massive population loss, a bloated and costly city government, jobs loss, and bankruptcy.  We’ve discouraged the Detroit and Memphis comparison for years because it was so prevalent as a putdown in media comments and so often driven by racism.

And yet, Detroit has made progress, and it does obviously have lessons for us (Memphis Medical District Collaborative grew out of one such lesson).

We admit our bias, but we also believe Memphis has lessons for Detroit.  We are fortunate to have more assets to work, inspirational grassroots leaders, new energy in City Hall, a driving determination to make the most of this moment, and our own best practices like Ballet Memphis, Church Health Center, Hattiloo Theatre, Bridge Builders, Community LIFT, Shelby Farms Park, CODA at Rhodes, and so much more.

Memphis has come a long way since it set out to get more involved in discussions at a national level and into the mix for philanthropic funding.  But, that said, it’s hard to imagine a better holiday gift than this new grantsmaking program by Kresge designed specifically for Memphis.