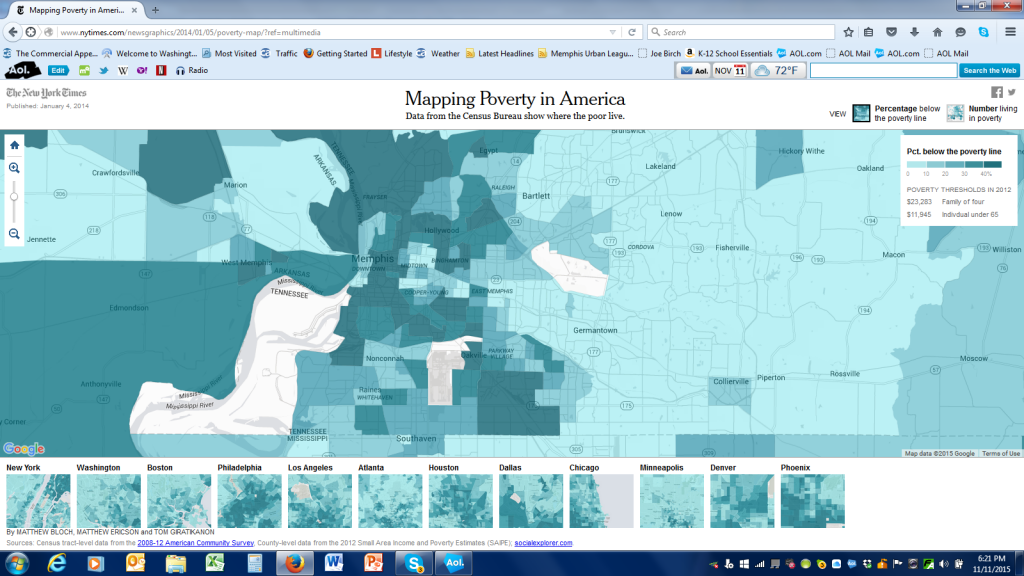 In Memphis, geography is too often destiny.

Where a person is born largely sets the choices and opportunities for one in four Memphians.

Generally speaking, these census tracts are found in the “C” of poverty (it’s also a sea of poverty), a term we coined seven years ago, which describes the distinct geography that grips so many people.  It is an area awash in thousands of foreclosures, higher crime, school dropouts, poorer public facilities, more blighted and properties, fewer jobs, and few opportunities.

It is a “city within a city” the size of Chattanooga where hopelessness corrodes family and civic institutions, where the poor quality of public services and facilities send the message to families that their own city places little value in them, and where lack of choices presents too many people with finding the best option from a list of bad ones.

Children living in the geography of poverty often live in third world conditions in neighborhoods that have little diversity in race and income and where someone with a fulltime job is an exception, not the rule.  Only about 4% of the people in the area have worked fulltime in the past 12 months and only 5% have college diplomas.

The densities of the neighborhoods are less than half of what they were in 1970, and in some, there are two-thirds fewer people, increasing the logistics and costs of providing public services, especially safety net services that are crucial in binding together the lives of their families.

In these neighborhoods, people die young.  Mortality rates for African American babies are three and a half times higher than Caucasians, and in more than a half dozen zip codes, the average age of death is less than 56 years, and there are equally disturbing trends in health care, housing, income, jobs, and more.

Half of the daughters born to teenage mothers will become pregnant themselves as teenagers and half of the sons born to teenage mothers will have contact with the justice system as teenagers.  Boys have a higher probability of ending up in jail than ending up in line to receive a college diploma, but regardless, they have prospects of earning half as much as middle class children with the same education.

There are lingering infrastructure needs that have not been addressed in decades.  There are thousands of vacant commercial and residential properties that are deterrents to neighborhood health.

Students’ transient lifestyles (a significant percentage move at some point during a school year) contribute to unequal starts in life and prevent the supports that come from more stable educational and family environments.  Meanwhile, poverty often creates the kind of toxic stress that inhibits optimal social and emotional development, meaning that many children in abject poverty start behind on their first days of school, a factor that often continues throughout their academic lives and increasing the odds of dropping out of school, coming into contact with criminal justice system.

And yet, the neighborhoods in the geography of poverty are often characterized by a unique, if not fierce, brand of pride that weds their residents to them, that produces homegrown outreach programs (especially by churches), and that often surprises and inspires organizations to reach out to them to find new ways to attack problems there.

As a result, there is a growing number of nonprofit organizations and local and national foundations working in these neighborhoods, but what has been missing is a clear over-arching vision, much less a plan, for what City of Memphis wants these neighborhoods to be in the future.

What has also been missing is an interlocking neighborhood plan for every big project investment that is made in Memphis.  Our community is lucky that there is renewed investment in important new projects, and we need to leverage these investments to make sure they ripple out to surrounding neighborhoods to strengthen them and to revitalize them.  That is not so much the developers’ responsibilities (although some of them are concerned with it) as it is City of Memphis and Shelby County Governments.

Kicking Off The Third Century

As we have often pointed out, in four years, Memphis will celebrate the 200th anniversary of its founding.  It will be a time to pay tribute to two centuries of events that shaped the city’s character and influenced world culture, but more to the point, it will be a time to stake out and define even greater aspirations for the future.

That should begin with Memphis’ neighborhoods, and what they need are neighborhood plans that converge to revive those in dire need and to give every child a fairer start in life by 2019.

Memphis bears little resemblance to the wilderness town laid out as a 5,000 acre real estate venture by some of Tennessee pioneer leaders in 1819.  But some things have not changed.

Today, just as then, there is a deep determination to build a new city known for opportunities, that leverages its advantages, and that builds a unique sense of community that  justifies the naming of this place for the legendary Egyptian city: “Memphis – glory of men.”

From its beginning, Memphis was known for its diversity and authenticity, displaying a special identity as a river city and a gathering place for diverse people.  Memphis has been different – aiming higher, thinking bolder, acting entrepreneurially, characteristics that have given birth to cultural icons known internationally in music and business.

In Our Own Best Interests

In other words, the 200th anniversary is a milestone in history that should now become our destination.  It’s a journey toward a city that offers quality jobs, avenues out of poverty, authentic and diverse neighborhoods, education and job skills for the knowledge economy, and economic advantages built on what we are first, best, and only.

It is in the enlightened self-interest of every Memphian and Shelby Countian to attack the problems in our core city neighborhoods with new purpose and innovation.  It requires us to see challenges and opportunities through the lens of neighborhood reinvestment and to develop strategies that are interwoven and interrelated to provide powerful options for their residents and that converge to create a new foundation for change and a groundswell of commitment.

While there are many approaches to this kind of neighborhood plan, some priority areas for us are human capital development, health, public safety, housing, economic development, social services, information technology, energy conservation/green jobs, transportation and connectivity, infrastructure, and effective government services.

But most of all, development of the plan requires involvement of neighborhood residents in its creation. Also, it should be anchored in the fact that every neighborhood is different and distinctive, defying a cookie cutter approach to addressing its problems, and in the end, it is the residents that ensure that the plan is authentic to their neighborhood and individualized to its culture and character.

David Ciscel: Poverty In Memphis And Beyond

How Poverty Affects the Brain