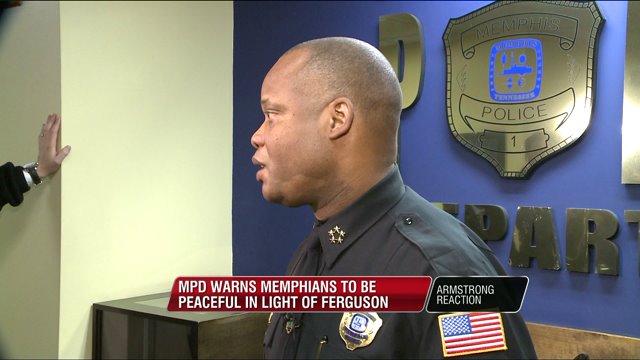 The protest in Memphis following the grand jury decision in Ferguson, Missouri, was not one of Memphis’s finest hours.

It wasn’t the protesters that created the negativity.  Rather, it was the hysteria that surrounded the protest by many in the community whose reactions reminded us how close to the surface bigotry and fear lurk these days in Memphis and Shelby County.

What’s most disheartening was that many of the unseemly comments came from unexpected places, people who otherwise talk about making Memphis better and who fight the impulses laid bare on several Facebook pages for Memphis neighborhoods that question the purpose of any African-American who walks through their neighborhoods, particularly black teenagers.

That these comments come from neighborhoods from Midtown and Central Gardens to East Memphis that otherwise pride themselves for how progressive and tolerant produces a thematic quality that testifies to the way that a handful of bigots can take discussions into the ditch.  Of course the evidence of that reality is convincingly offered daily in the comments on The Commercial Appeal and television news sites.

While we understand that the Memphis Police Department needs to be ready for any eventuality, we think that its comments amped up concerns.  Some people say that Memphis Police Department is responsible for the over-the-top decisions by decisions adjacent to the protest site to close, despite the site being a regular site for demonstrations and protests for decades.  We are hard-pressed to think of any of them that even hinted at the kind of risks suggested by police officials.

We do know that as the protest time approached, there was a raft of rumors and innuendoes that were incendiary and overheated.  These spread quickly through East Memphis although we can’t think of a Memphis protest in the past three decades that have resulted in looting and destruction to property, and the odds were astronomical that a group of a few hundred people of diverse races and ages at Poplar and Highland were suddenly going to combust into a marauding band of plunderers.

And yet, nearby businesses were urged to close, country clubs sent out emails telling residents in the area to lock their doors, comments on neighborhood Facebook pages called for people to lock their doors and keep their guns handy, and predictions about trouble went viral.

It was as if a large part of Memphis was suddenly gripped by collective obsessional behavior, or group hysteria, and as a result, they temporarily set aside their own experiences, their knowledge of Memphis history, and their own logic.

It’s hard to dissect what caused and fed the outburst of viral rumors, but it’s also hard not to consider that it was fueled by the shameful and shameless coverage of the Kroger incident that has led to African-American youths being regularly referred to as thugs (even by a couple of news reporters).

Even now, three months later, TV news is loathe to get the assault accurately.  As a result, few of the area news watchers know that it was done by three of 11 teenagers on three people at Kroger.  For the other eight, it was largely a case of being at the wrong place at the wrong time (one of whom was valedictorian of her class).  Forced out of CiCi’s pizza and away from its lure of affordable pizza, the group moved toward the nearest store that was open.

That’s why we admire the decision by Juvenile Court Judge Dan Michael, exercising the wisdom of Solomon, to modulate his decisions in the matter, requiring the eight to complete 40 hours of community service, write letters of apologies to the three victims – two were Caucasian and one was African-American – and stay out of trouble or their parents will have to pay the costs for the handful of days they were held in Juvenile Court detention.

Meanwhile, Judge Michael treated the three people charged with aggravated assault much differently.  The 19-year-old is being held in Shelby County Jail awaiting trial, and the other two teenagers were transferred to the Tennessee Department of Children’s Services for an indeterminate amount of time.  That’s the full punishment allowed by state law (although Juvenile Court was not set up to punish but rehabilitate, which is why the use of the word, punishment, is so rarely mentioned there).

It is not our intention to diminish the concern about crime among Memphians upset about their Memphis’s continuing high ranking for cities with the highest crime rates and a recent uptick in crime (although the overall crime rate remains significantly less than it was six and 10 years ago).

The widespread concern about violent crime is not easily dismissed even though the facts demonstrate that most violent crime occurs in the areas of concentrated poverty in Memphis.  Lost in all the nightly meme from TV news about how Memphis is being destroyed by lawless teenage criminals is that about 80% of all victims of violent crime are African-American, and as a result, no one is more interested about fighting crime (while fighting the vilification of the majority population of Memphis).

If the third world poverty that is found in the 78 high poverty census tracts is not bad enough, the residents live in neighborhoods where violence explodes without warnings, where children are taught where to hide when they hear gunshots, and where elderly people die from the heat during long bouts of high summer temperatures rather than unlock their front doors.

Ferguson was merely the latest reminder – the no true bill yesterday by a New York grand jury in the killing of Eric Garner underscored it – how differently the experiences are for African-Americans and Caucasians.  It may well be that the majority of Americans want to understand the different life experiences of other races, but it seems often these days that the voices of those who want to communicate are drowned out by the voices that prefer political talking points, snarky comments on social media, opinions based on stereotypes rather than personal relationships, and the proven ability of those in power to portray themselves as victims.

Not only is justice written into the first sentence of the U.S. Constitution, it is a founding right and expectation for every American.  That so many Americans feel that the scales are tilted against them is not a reality that should be greeted with dismissive comments because as Dr. King wrote from the Birmingham jail, injustice anywhere is a threat to justice everywhere.

But all of this is background.

The protests at Highland and Poplar weren’t by enraged people facing lives of poverty (which would have been understandable) – although many of the protesters there that afternoon have also protested (and worked) for livable wages, against wage theft, and for expanded social net programs.  Anyone who’s covered these protests in the past knew many of the people who turned out to object to the Ferguson grand jury’s no true bill and the way that the prosecutor conducted a most highly unusual grand jury presentation.

If the protests at Highland and Poplar have had a common theme over the years, it is that they are heavy on sincerity and light on problematic people.  Because of it, the emphasis as it approached should have been more about inspiring calm than talking about police preparedness.

In the aftermath of the protests, we hope MPD officials do more to acknowledge the peaceful nature of the participants.  In an interview with The Commercial Appeal, MPD director Toney Armstrong said: “I think the protest organizers here went through some extraordinary means themselves that they remained peaceful.”

We are subject to being corrected, but we don’t think the means were extraordinary because none were needed for a group committed to the tradition of nonviolent protest.