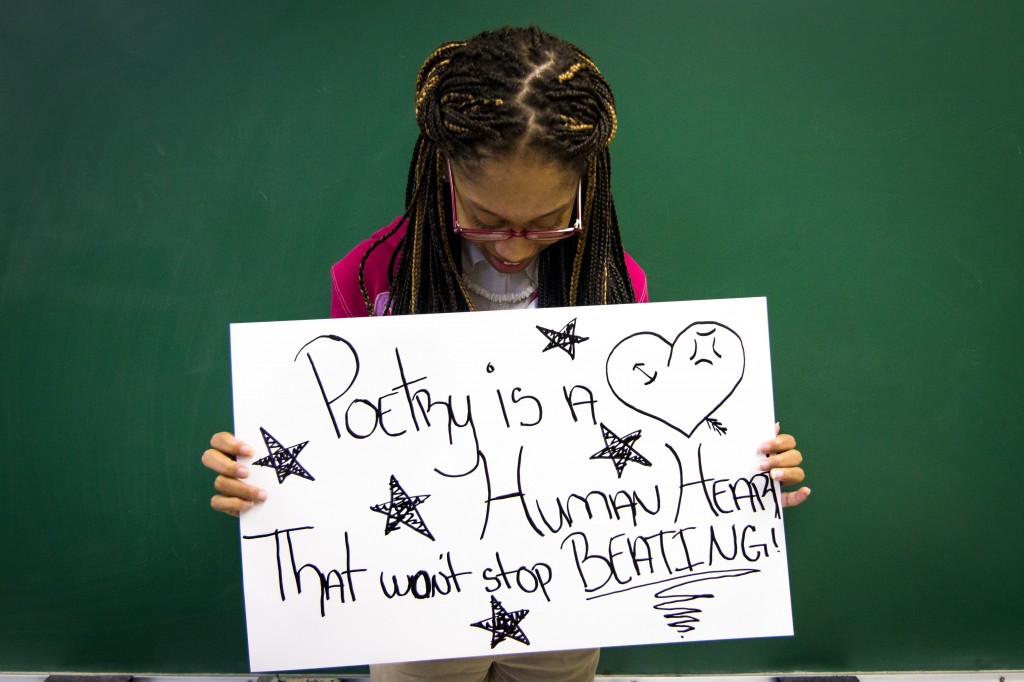 A Teach for America member in Mississippi started a program in her classroom two years ago that employed poetry to motivate students, to teach them the techniques of poetry, and give them a creative outlet to express their feelings.

It’s call Poet Warriors Project , Teach for America’s student writing and empowerment initiative, and right now, its website is featuring some remarkable poetry by the students of Stephanie Fox at Power Center Academy in Memphis.

Becky O’Neill at Teach for America gives us the background:  “This is the first time Poet Warriors has come to Memphis. The project was started by a corps member in her Mississippi classroom in 2012 and has since developed into a national program (the corps members spent six months last year driving from coast to coast, working with over 2500 students). This year, the program exists in 20 TFA regions, including Memphis. Through the curriculum, students embrace the freedom poetry offers while learning technique and studying poets who have created change through their writing (Langston Hughes, Gwendolyn Brooks, Carl Sandburg and Zora Howard).

“By focusing their poems on place and cultural identity, these famous poets provided the nation with intimate portraits of families, communities, and workers, bringing acute cultural awareness to the national dialogue. Dubbing themselves ‘Poet Warriors,’ students now strive to do the same. Students begin by asking themselves, ‘What do I know that most others do not?,’ “What can I teach that others could not?,’ ‘What stories must be told?’ and then take up the work of informing the national dialogue by sharing their stories.”

If you want to be inspired and moved, take some time to read the 37 poems by these talented Memphis students.

We print two of them here.  The following is a poem entitled “I Never Knew You” by eighth grader Courtiunna Mallard:

I never knew you

But I wanted too

I have your hair, eyes, and nose

In the care of man

Who is not even my father

Did you even know you had a daughter?

I have so much anger build up

That’s why I never let any man get close

Cause when I’m too attached

I end up hurt

14 years of being lied to about who’s my father

Why do I even bother?

Waiting for a bail

Because you abuse your very own

The child you will never see grown

I never knew you

Here’s a poem, The Only Witness, by eighth grader Devin Foster:

Blood poured out of the body
Similar to the color of the roses
The body was taken away,
the suspect questioned
Besides the suspect
The only other witness alive
were the roses

Later,
a man cut picked them out
He thought they didn’t belong
These roses were now dead
And eventually, would be thrown away
6 feet under

They had no voice, to object his claim
Therefore, the case went his way
But still, there were those roses

One shade lighter, two shades darker
The color was a deciding factor
I’m sure that if the roses had to ability to speak
or even to whisper
Justice,
would’ve been served.

You can read the other poems by these special students by clicking here.