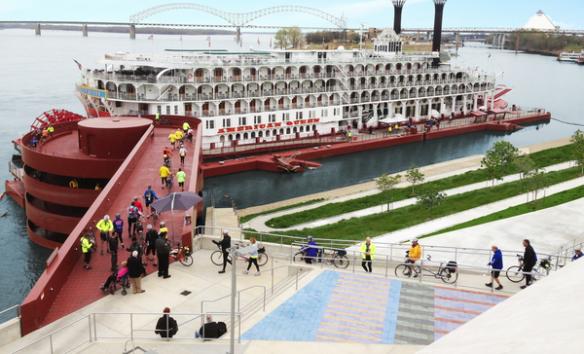 Thumbnail: Beale Street Landing, when the river cruise industry is not hobbled by COVID-19, produces $4.5 million in revenues to local government, which is far more than the $2.25 million it takes to pay for its construction bonds each year.  Looking ahead to the days when the pandemic can be seen in the rearview mirror, Beale Street Landing’s economic impact will soar.

When Beale Street Landing opened in 2014, opponents came up with what they thought was the ultimate insult.  Rather than call it by its name, they called it “boat dock.”

Now seven years later, it turns out that wasn’t an insult but a vision of success.

The river cruise industry has docked so often at Beale Street Landing that once the pandemic lifts, it will once again not only pay for itself but produce new revenues for city government.

That should come as no real surprise, since initial projections – dismissed as inconvenient facts by the fixated critics – always said it would produce enough revenues to pay for its own bonds.

The revelation is that it’s been doing it with relative ease while putting additional money in local government coffers.

So much for the complainers’ argument that Beale Street Landing is the archetype of the white elephant whose cost would drag down city government budgets.

When its price increased to $42 million, lost in the yowls of those people determined to label it a failure was the fact that the American Queen’s docking fees, which were negotiated by City of Memphis, would pay back the additional $9.75 million appropriated by Memphis City Council.

The need for additional funding was frustrating, but it was clear there were misjudgments made by the Riverfront Development Corporation in the building of Beale Street Landing which drove the price up, notably the climbing price of steel and new engineering assessments about soil conditions.

As early as 2006, I had expressed my support for the project – as well as calling for Tom Lee Park to be turned into a real park.  That’s not to say that I wasn’t concerned by some Riverfront Development Corporation decisions — putting the parking lot and the trash dumpsters in a high visibility location just south of Beale Street Landing’s main entrance, questions about the feasibility of a restaurant so disconnected from downtown and with limited foot traffic, and a gift shop that sold more schlock than an Elvis Presley gift store on I-40 on the way to Nashville.

Like many others, I wasn’t sure the restaurant/gift store was going to work as designed, but even it didn’t, there would come a time when a different concept would replace what was there when it opened.  After all, there were examples all around.

Many people thought that eventually Memphis would have to raze The Pyramid after it had stood empty for eight years.  Then along came Scott Ledbetter and Robert Lipscomb who imagined how it could be repurposed from an arena with mediocre ambiance into a retail store with tens of millions of dollars in sales and millions in Tourism Development Zone revenues.

The former Sears distribution facility stood empty even longer, closing completely in 1993.  As the building stood like a massive tombstone over the Crosstown neighborhood, there were calls for the building to be torn down.  In 2017, it opened as Crosstown Concourse’s urban village.

And that’s not to mention that downtown Memphis itself is a monument to the power of adaptive reuse of existing buildings.  It’s one of the things that sets the city apart and gives it a special kind of scale.

That said, despite being empty, Beale Street Landing continued to attract visitors, joggers, exercisers, yoga classes, and weddings and engagement parties to its sloping roof, skaters to its surfaces, kids to its play areas, workers to its free wi-fi, and river lovers to its views of the river that has flowed by the bluffs for millions of years and is at its widest and wildest at the Memphis riverfront.

I’m not sure what price some people are willing to put on intangible benefits to quality of life, because they are only focused on dollars and cents.

So, for those people, here’s something for you: In 2016, an economic study set the annual economic impact of the riverboat cruises at $36.4 million (not counting any revenue from the restaurant-cum-special events space and downtown spending by cruisers in restaurants and overnight stays.

It also concluded that Beale Street Landing produced $4.5 million in local tax revenue.  That’s $2.25 million more than the cost of the construction bonds.

You do the math.  Not only does Beale Street Landing pay for itself, but it is spinning off additional revenues to local government.

The economic impact for about 50 cruises did not include the spending of cruise customers while they are in Memphis.  The economic impact report was conducted by Younger Associates, which also prepares similar reports for local organizations like Memphis in May.

By 2019, dockings had increased to 67, and before COVID hit the cruise industry, 97 total dockings were expected in 2020.  Looking ahead, cruise ship companies are announcing new stops in Memphis in anticipation of a day when they can ramp up to pre-pandemic levels.

American Queen has announced its schedule for 2023, which includes 39 cruises between Memphis to New Orleans, seven more than next year.  Also, a new American Queen ship will stop in Memphis on its cruise from St. Paul and New Orleans.

Clearly, a Memphis stop is popular for American Queen customers or the company wouldn’t be adding cruises and looking to even more in the future.  In 2019 alone, river cruises produced 21,491 room nights in local hotels.

American Queen and American Cruise Lines have stops in Memphis, and Viking Cruise will begin cruises including Memphis in fall of next year.

No Room For Argument

There hasn’t been an economic impact study of Beale Street Landing since 2016, but with the expansion of cruises by 2023, there’s little question that its economic impact will far outstrip any expectations that existed for it when it was built.

It also puts a lie to those who continue to dismiss its value or who are wed to their outdated and negative talking points.