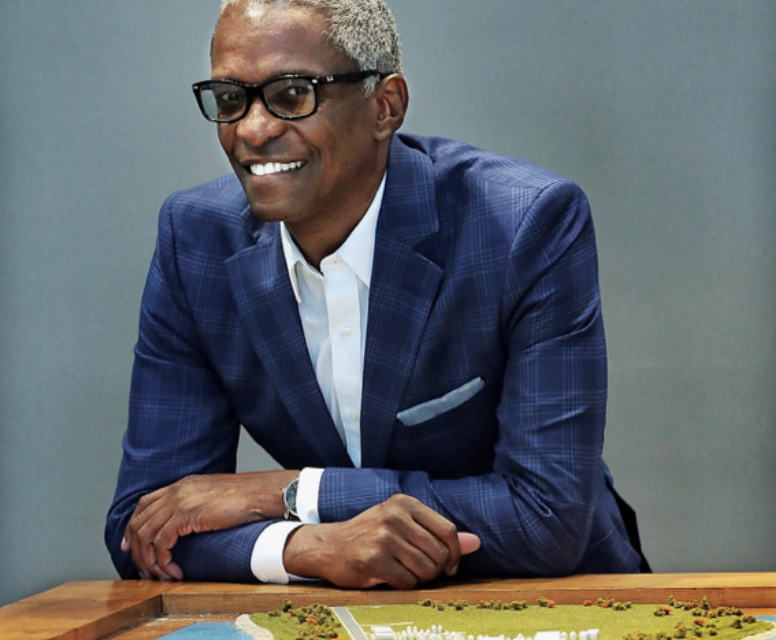 Thumbnail: Projects on the downtown horizon – Tom Lee Park’s transformation, The Walk at Union construction, a new Memphis Brooks Museum of Art, and the projects of the Downtown Memphis Commission – position the city for a burst of momentum unseen in decades.  Carl Person is at the center of much of it, and he’s the subject of today’s blog post.

If you’re wondering what downtown’s future will look like, there’s no better person to ask than Carl Person.

He’s involved in construction of The Walk on Union, transformation of Tom Lee Park on the riverfront, relocation of Memphis Brooks Museum of Art, and the work of Downtown Memphis Commission.

To say that he is optimistic and excited about what downtown will be in only a few years is an understatement.  He sees its potential as bringing an end to any lingering self-doubt and negativity that have characterized the city in the past.

“I love right now where Memphis is,” he said. “Our best days are ahead of us and we will all rally around the one thing called Memphis when all projects come together and produce a big wave of momentum.”

His unique perspective comes from his roles as a member of key boards driving downtown’s impact projects and his work to increase minority participation on them.

A native of Somerville and the child of educators – his father was an elementary school principal and his mother was a teacher – he graduated from Lane College in Jackson, Tennessee.  Following college, he began a management career of almost four decades divided equally between FedEx and UPS.

In that career, he worked in all facets of the companies and “learned how to run a business.  It began at FedEx University where I learned how to lead and manage.”

He said he is at halftime of his life after his years in corporate America, so he decided “the third and fourth quarters would be spent on work that is gratifying for me and with organizations that make Memphis better.”

That gratifying work today involves the $741 million apartments, hotel, retail, and office building, The Walk on Union, “a city within a city”; the reimagined $60 million Tom Lee Park, “the front porch for Memphis”; the new $150 million Memphis Brooks Museum of Art, “a first-class museum”; and the impact projects for downtown driven by the Downtown Memphis Commission.

As chief diversity officer for The Walk on Union developed by Memphian Kevin Adams, it’s Mr. Person’s job to make sure the project successfully contracts with minority and women-owned businesses for at least 28% of its $741 budget.  “It’s about supporting the inclusion side in creative ways to involve people in the project and beyond,” he said.  “I’m talking about making sure minority companies are not just prepared for work at The Walk but to make sure it’s not a one-time hit because they are better positioned for more jobs.  It’s about inclusion, growth, and development.”

For example, if a minority company can’t scale up to handle a specific component of the massive development, Mr. Person can help partner it with a large company so that it can develop joint ventures and collaborations that could serve it well on other projects.

It’s the same role he’s playing for Montgomery Martin Contractors, charged with construction of Tom Lee Park.  “It’s where Memphis will meet in all our diversity,” he said.  While he does not have that specific role in the construction of Memphis Brooks Museum of Art, as president of the board, he oversees the project and is mindful of building an art museum “that is not just seen as for a certain sector of the city.”

The reimagined riverfront and the art museum, which is located on a striking position on the bluffs (replacing a fire station and fire department headquarters), will have a symbiotic relationship as they together bring new visitors and residents to downtown.

The Center Of The City

Mr. Person was chairman of the Downtown Memphis Commission in 2017-18 and is now a member of the Center City Development Corporation, which acts as a developer for the Commission. While serving as chairman, the Commission named Jennifer Oswalt as its president and she ushered in an era of historic activity.

At the top of his wish list is a “really good school for downtown.”

Drawing on his experience as a member of the Tennessee Department of Education’s Career & Technical Education Advisory Board in 2010-13, he said: “The talent we need is sitting in our classrooms today.  We have to double down to make sure they are prepared for quality jobs.  Companies are coming back downtown and we need to be investing and producing the workforce that will keep them.”

“Downtown is the center of any city and it’s typically the engine that moves the city,” said Mr. Person, explaining why everyone in Memphis should care about downtown’s future.

“That’s why I have an appreciation of the people willing to invest downtown and in Memphis,” he said.  “I’m thankful folks are seeing below the mythical surface of Memphis, say, Elvis, and see the real city in its entirety.  We have to make sure everybody can afford to enjoy Memphis.

“It’s about educating and branding the City of Memphis on the amenities we have – Elvis but also Stax, Beale Street, Front Street, FedExForum, The Walk, National Civil Rights Museum, Convention Center.  I can’t name them all.  We go to New Orleans and brag about a hole-in-the-wall place we’ve found, but we’ve got some right here and we need to brag about them.”

(Note: It’s an especially good week to learn about some of them since this is Memphis Black Restaurant Week.)

“I want to make a difference, because I love where Memphis is right now,” Mr. Person said.  “My opinion is that we have the right people in the right places and they want to get things done.  We all seem to be on the same page and it’s to make Memphis better.  We don’t have to look in the rearview mirror to be proud, because so much is happening right now.

“To everyone in Memphis, you are here for a reason.  Don’t leave Memphis.  We need you.  Never give up.  The good always outweighs the bad.”  Organizations like MIFA, where he serves as a board member, offer ways for individuals to emphasize the good.  “Together, we can get great things done,” he said.

How To Fund Public Transit Without Raising Fares or Cutting Service