If the Tennessee Department of Transportation’s maintenance of state streets is an indication of that government’s opinion of Memphis, it is one of complete disdain.

For at least four years, City of Memphis – led by then-Councilman and now Council Chair Kemp Conrad – has appealed to TDOT to properly maintain some of the most visible parts of our community’s roadway network.

And for four years, TDOT has delivered promises but little else.

In fact, two years after then-Councilman Conrad wrote to then Commissioner of Transportation John Schroer in August, 2014, state funding for mowing and maintenance for the region that includes Memphis and Shelby County actually went down by almost 10%.

Mr. Conrad’s 2014 letter about “countless complaints about tall grass and weeds” could just as easily describe today’s situation. He wrote:

“Tall grass and weeds have been the rule, and not the exception…It seems like the state’s contractors are underbidding projects as it relates to maintenance of the right-of-way in their bids. The City of Memphis would be happy to cut the ROW, but we are forbidden to do so. Our city is working hard to fight blight and enduring six-foot weeds and tall grass is a self-inflicted wound, both to the State of Tennessee and the City of Memphis.”

In the ensuing years, city taxpayers paid about $2.5 million to maintain the state streets as part of a contract between the two governments. Unfortunately, for city taxpayers, TDOT only reimbursed Memphis for about $1.5 million.

That’s why in June of last year, City of Memphis notified TDOT that it would not sign the contract again and insisted that it is the state agency’s responsibility to maintain the street.  After all, City of Memphis has 6,000 miles of streets of its own to maintain.

(Click here to see a map of the state highways in Memphis and Shelby County.)

Since telling TDOT that it has the responsibility of maintaining state streets, an intolerable situation has become a crisis and a persistent eyesore.

Apparently, this week, Chairman Conrad said enough is enough. He emailed a request for usto help him convince TDOT that Memphis can’t be ignored any longer. Here’s what his email, featuring a his photo in weeds higher than his knees, said:

“For months, the City has been quietly working behind the scenes and pleading with the State of TN (TDOT) to ensure interstate, state routes and interchanges are being well kept. These are the responsibility of TDOT.

“In years past, we have supplemented the TDOT work by $1-1.5 million per annum to keep the grass at a level we deem acceptable.

“But that’s not fair and we can’t afford it anymore. That’s a lot of money that we could be investing in city-owned roads and a myriad of other worthwhile investments.

“Please notice the interstate exchanges and other state routes as you drive around town. The grass is more than 3 ft. in most places, our blight standard is 12 inches. If the state were a private property owner we would cite and fine them for blight. 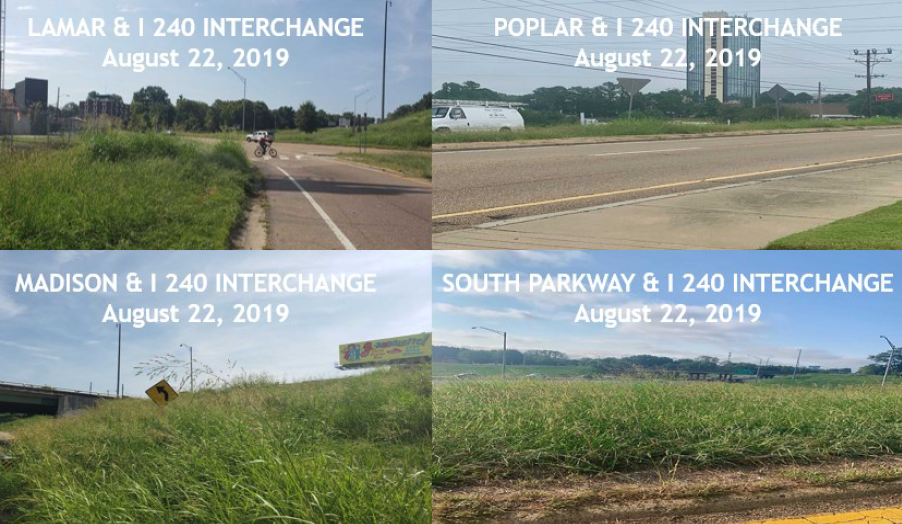 “We don’t want you to think this blight is the City’s responsibility and that we aren’t taking care of the basics.

“I regret that we have had to make a public plea because TDOT cannot execute this very basic, yet important function, but I took a pledge to always fight for Memphis.  I need your help to fight now.  We should never accept this inferior level of service as normal or acceptable.  We expect and deserve better.

“The State of Tennessee has generally been a great partner for Memphis, but in this, they have failed and we expect them to get it right.

“If you agree, TDOT needs to hear from you. Please take a minute if you can spare it and reach out to our TDOT Commissioner, Clay Bright via phone at 615-741-2848 and email at TDOT.Comments@tn.gov.  His twitter handle is @TDOTCommish. TDOT’s twitter handle is @myTDOT.

“Also share your concerns with Don Johnson, the Director of Constituent Services & Community Relations for the State of Tennessee. He can be reached at (615) 741-2001 or don.r.johnson@tn.gov.

Thank you for your consideration. Have a great weekend and thanks for calling Memphis home.

Celebrating 20 Years of the UrbanArt Commission