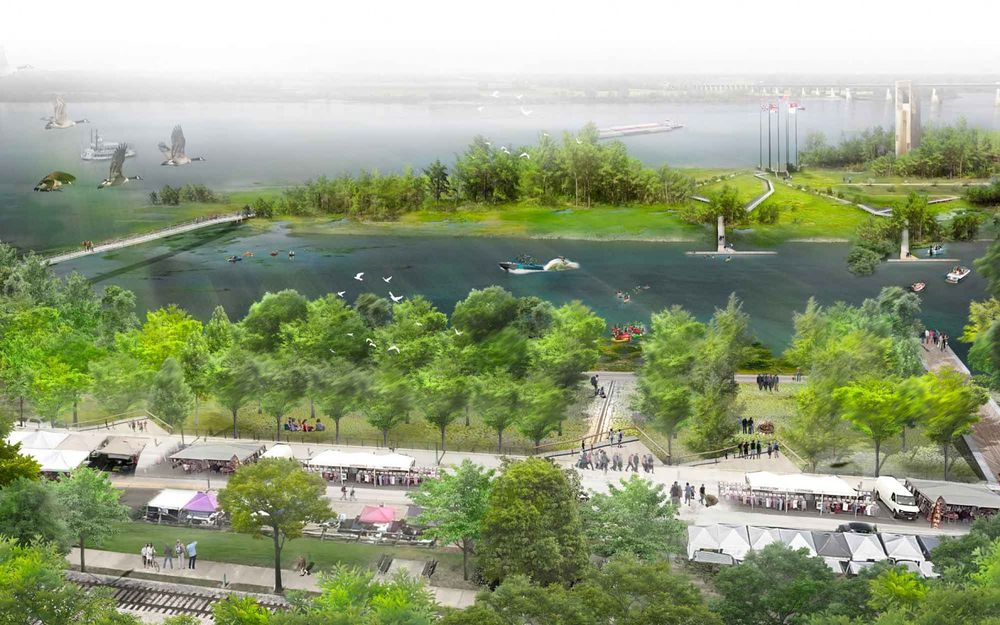 In light of the discussion about the future of Tom Lee Park, we are reposting a commentary from July 24, 2017, saluting Mayor Strickland for his leadership for a more vibrant riverfront, the fulfillment of decades of recommendations that were not implemented:

That’s why it should be no surprise that we are excited by the Studio Gang concepts unveiled last week for a reimagined, reinvigorated, revitalized six miles of Memphis riverfront, the city’s most important natural resource and distinctive opportunity.

In these dozen years, we have blogged about the potential of a vibrant riverfront to reposition Memphis and to update and amplify its brand nationally.  We have written about the decades of lost opportunity by focusing on project rather than place.

We have opined about the lack of connectivity that keeps the riverfront a broken whole.  We have suggested that while ideas about the future of Memphis’ first great place may spark disagreements, surely there is consensus that something has to be done to make more of what the riverfront can be and do for the city.

Since the Center City Commission Development Plan for the Riverfront Sub-Area by the celebrated Denise Scott-Brown and respected local architect James Williamson in 1987, there have been 18 other plans dealing with the riverfront, and while there have been a few  improvements made over the year, they have not produced the kind of vibrancy that should sustain the area.

In issuing her 1987 comprehensive plan for downtown (disclosure: I was chair of committee that selected her firm for the work), Ms. Scott Brown’s description of her work could also define the work by Studio Gang of Chicago and New York.  Ms. Scott Brown said that she was an “urban detective” but she was struck particularly by the “desolate cobblestones” and the history of the riverfront.

Ms. Scott Brown was one of the most erudite and interesting people we’ve ever met, but ultimately, her plan was too much of a light touch regarding the waterfront although her role in killing plans for the FAP-3 interstate connector linking I-40 and I-55 are reason enough to celebrate her contribution.  It was, she said, a “Pyrrhic victory because they took all the money and spent it in the suburbs.”

In 2012, Memphis Mayor A C Wharton Jr. and Housing and Community Development Director Robert Lipscomb approved our recommendation for author, New Urbanist, and architect Jeff Speck to be hired to review previous riverfront plans and recommend actions that were small scale and actionable in the near term.  However, in the wake of his recommendation, little was done.

In presenting his report, Memphis Riverfront Analysis and Recommendations, Mr. Speck cited the need for a more in-depth, comprehensive planning approach for the riverfront and that is exactly what Studio Gang, led by Gia Biagi, its principal of Urbanism and Civic Impact, has done with its six-mile, five-zone approach defining a “connective network of spaces and opportunities that enrich the human experience.”

And yet, nothing is written in stone, as explained by Alan Crone, top adviser to Mayor Jim Strickland and head of the Mayor’s Riverfront Task Force and who ably guided the riverfront committee’s work.  Mr. Crone pointed out that Studio Gang provided options and that release of the firm’s report is a “starting point” whose final recommendations will be refined in coming months by community input. 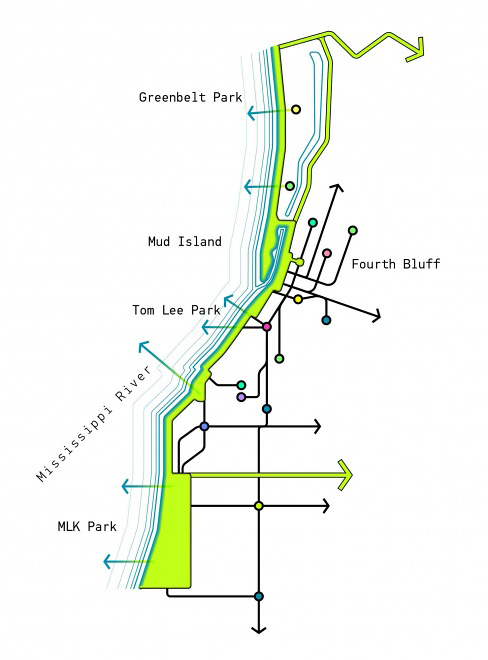 Already, Studio Gang’s work – and national reputation – has resulted in significant attention.  Curbed wrote that the firm’s “latest project, a scheme to redesign and redevelop a six-mile section of riverfront in Memphis, Tennessee, offers another showcase of the studio’s unique philosophy of blending the natural and artificial.

“Along with the Studio’s recent plans for a prototype (Chicago) police station and Philadelphia neighborhood, this new park plan shows the firm is also becoming skilled at community-directed urbanism. The scheme was the result of extensive community surveys and research, with thousands of residents, as well as interviews with Memphis Mayor Jim Strickland’s riverfront task force and deep dives into previous attempts to redesign the Mississippi riverfront.  Focused on connecting the city and its residents with each other and the river, it’s a forward-thinking look at public design, and an attempt to create a signature civic gathering space.”

It’s hard for us to recall any report, plan, or study about Memphis that has ever been so lovingly and positively reported or that has such profound aspirations to set national standards.  Now, all it takes is what we have provided precious little of over the past 35 years – action.

That’s the most encouraging indicator from this process.  We can think of no time in recent history when more funders and leaders were aligned to make something happen.  The relatively recent entry into Memphis by the Kresge Foundation continues to write a new chapter in ambition and critical thinking.   We wrote about this in December and the momentum unleashed by this $3.6 billion foundation’s interest in Memphis seems to be building.

It seems highly possible that we will look back to the day as a milestone when Kresge Foundation – which has entreaties for help from cities everywhere – decided that Memphis deserved its special help.  That it is supported and joined in the riverfront work by the Hyde Family Foundation – which is behind so much good that happens here – and the involvement of the Riverfront Development Corporation bode well for future action.

None of this would have happened, however, if it had not been for Mayor Strickland, whose stamp of approval was required to set this process in motion.  It belies criticisms that being “brilliant at the basics” rules out concern about improved livability and improved urban design. 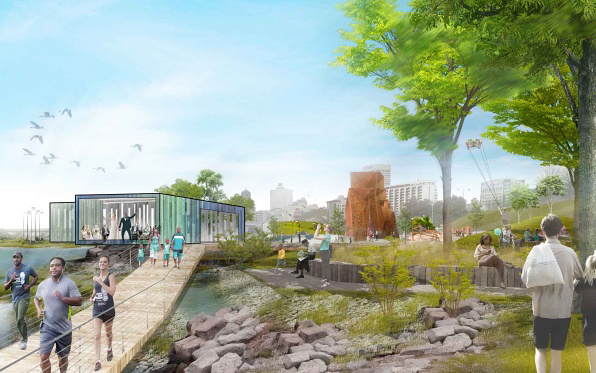 We are particularly impressed that the riverfront report demonstrates a deft touch, in particular saluting the environmental issues that have so often been a point of division in moving ahead.  Not only did the report honor the existing environment, it also set ecological restoration as a priority.  This is a powerful lesson learned at Shelby Farms Park, where a planning principle was that it takes people to restore ecologies that people disrupted.

More to the point, the concepts are built on the belief that that in stitching together underused public assets on the riverfront, we are doing more than mending broken connections, we are in fact creating a new civic fabric as the riverfront comes to not only symbolize the city we once were but the city we want to be.

There is much to like in the Studio Gang report, and we particularly like the way it addressed the five zones – Fourth Bluff, Mud Island, Tom Lee Park, M.L.K. Park, and Greenbelt Park.  If you’ve followed this blog at all, you know we have special passions for Tom Lee Park and Martin Luther King Jr. Riverside Park.

In May, 2016, we wrote, “Finding the Park that Martin Luther King Riverside Park Wants To Be,” which urged improvements for this magnificent, undervalued Memphis park.  In January, 2012, we wrote, “Tom Lee Needs A Rescue,” and hoped for a time when the “moonscape” of Tom Lee Park would be modified to include “outdoor rooms.” In May, 2013, we summarized Mr. Speck’s report, “Upgrading Two Parks for a Better Riverfront.”

Of course, those are only a few of dozens and dozens of riverfront blog posts, but suffice it to say that we are genuinely excited about the road ahead, and after so many plans and so many false starts, that may be our strongest endorsement of all to the quality of the Studio Gang work.