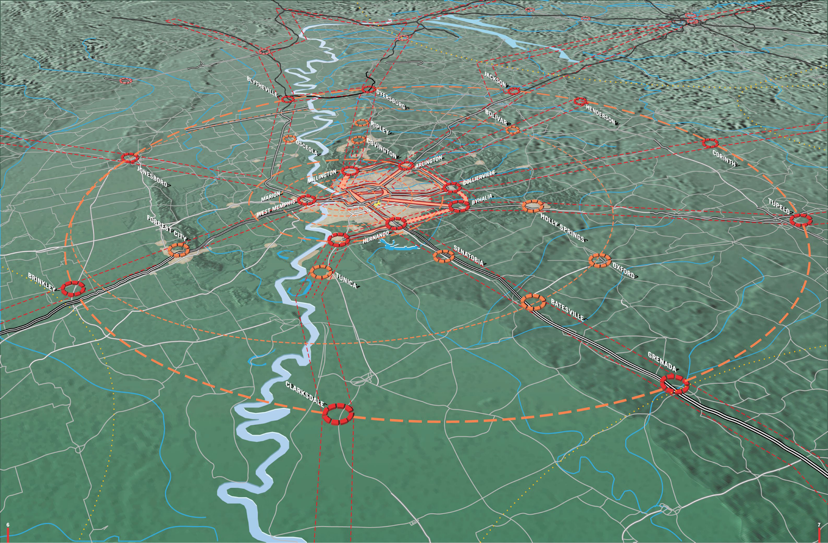 It was about 25 years ago when we introduced the concept to our community as a priority for Shelby County Government, and a part of us has regretted it ever since. It’s not that we feel that we were wrong; it’s just that it seems more and more that the application of the concept has come at the expense of the city that lies at the heart of the region.

We also know that often solutions dressed in the cloak of regionalism are anything but sensitive to the urban core that is the beating heart for the area. The poster child to prove this point is seen in transportation decisions that are more motivated by moving packages through the region than keeping people in the city at the core of the region.

Because our corner of the world focuses more on creating high-quality roads for trucks and new corridors for development, there is always one more unnecessary project (think I-269) and the plethora of road expansion plans so traffic can move faster from 7:30 to 9 a.m. and 4:30 to 6 p.m. each workday.

Here’s the thing: it seems to us that regionalism across the U.S. is often more outward-focused than inward-directed. As a result, programs supported – and often conceived – by the major city focus on a stronger region are rarely reciprocated by the region’s suburban cities.

For example, it’s not unusual to hear Memphis and Shelby County officials call for regional progress and to urge regional strategies that embrace the best interest of area’s cities. And yet, there’s little of that kind of strong, determined commitment flowing from the fringes back to the center.

We’ve seen it most prominently here in the slow understanding that sprawl is a cancer that threatened our financial and social health. If we are serious about sustainability and becoming the kind of green city that can succeed in the new economy, we’ve got to get serious – not to mention, honest – about the forces (and the public policies that set them in motion) that put us in the condition we’re in today.

In the past 10 years, in the midst of a period of disinterest in cities, the troubling trends in Memphis quickened – children in poverty dramatically increased, more young professional talent left, economic segregation deepened and middle income families moved.  There’s little reason to think things will get better with the policies of President Donald Trump who can say “state’s rights” more often than a seg governor of the 1960s.

Today, about 35% of Memphis workers are either unemployed or have not looked for a job in so long that they are no longer included in the unemployment rate.  The poverty rate in Memphis has rose 27.2% in the first decade of this century and the poverty rate for adolescents climbed 45%. Memphis lost an average of three families a day that earn $35,000 to $75,000. Inside the 1970 city limits of Memphis, population is down 28% and density is cut in half.

It’s a vicious cycle: people leave, property values shrink, taxes go up, jobs growth is slower, talent leaves, well, you get the picture. It’s a vicious cycle that, if not interrupted, escalates and at this exact moment, that’s where we find ourselves. And so do dozens of other cities.

And yet, there are still people and organizations calling for a blind allegiance to regionalism that treats cities as after-thoughts in problem-solving. That’s why we admired the city-centric work of CEOs for Cities when it was headed up by our colleague Carol Coletta.

It had an unflinching bias: nothing matters more than cities.

That’s partly because so often the language of regionalism is co-opted by business forces, particularly real estate and logistics, that have only a passing acquaintance with the spirit of regionalism. More to the point, regionalism was often used as the rationale for political contributions and influence that chewed up about $750 million over 10 years in tax freezes while schools, libraries, and neighborhoods cried out for more investment.

Mysteriously, there’s always more money for highways, and despite all the hyperbole about new roads as economic engines, there’s precious little evidence of it here, particularly with our jobs growth lagging behind most other regions of our size.

But back to our main point: it’s past time that we ease up on the rhetoric of regionalism and concentrate single-mindedly on addressing the challenges of Memphis, beginning with development of  transformative strategies that can create neighborhoods of choice for middle income families and young families.

At the same time, our elected officials need to set the heart of the region – Memphis – as their top priority.

If anything is obvious with the current administration in Washington, D.C., it is that all regions will be more on their own.  That’s really saying something considering that our federal government has rarely had an effective urban policy focus – and that state government really doesn’t think of regions at all except to divide them up into special interest groups to maintain political power.

Let us repeat a fact we have repeated often: while there is a tendency for the region to see Memphis as the source of its problems, the truth is that the problems that grip Memphis are also regional in nature.  For example, headlines that say that Memphis is #1 in poverty are referring to the region, not the city.  It is the high rate of poverty in the rest of the region that drives the high ranking.

There are also low incomes, low education levels, and more that don’t get better as we drive out of Memphis and Shelby County.  It’s this softness in the economic indicators that matter outside Shelby County that make our region different from others like Nashville, Atlanta, Louisville, and Indianapolis.

We’re not saying that regionalism doesn’t matter.  It does.  What we are saying that it has its best chances of sustained success is if its strategies are inside-out, because we’ve learned in the past 25 years that the outside-in commitments fade much too quickly.

10 Suggestions for Building a Startup Ecosystem