With Alan Crone, chief adviser and confidant of Memphis Mayor Jim Strickland, now leading the riverfront process that includes upgrading Tom Lee Park, there’s new hope for transforming the park from a moonscape to an attractive, landscaped place that capitalizes on its incredible location on the Mississippi River.

A city official once said that the purpose of Beale Street Landing “was to fix Tom Lee Park,” but regardless of how much we have supported the construction of the riverfront’s new landmark, we remain a long way from fixing Tom Lee Park, which on its best days more resembles a pasture than a city park.

More to the point, the construction of a parking lot just south of Beale Street Landing did nothing but create a massive disconnection and obstacle that prevented the seamless unification of the park to the Landing.

But back to the subject of this post, over the years, the RDC said that Tom Lee Park remained untouched because of the recalcitrance of Memphis in May International Festival, but in his Jeff Speck final report, consultant, architect, and author Jeff Speck said that, based on his meeting with Memphis in May executive director Jim Holt, the festival had no problem with adding “rooms” to the park in order to break up its monotony, to give it more vitality, and to just make it more interesting. What it had a problem with was never being consulted.

“A number of plans have been made for beautifying Tom Lee Park, with the main strategy of using copses of trees and shrubs to divide the 4000-foot-long park into a series of ‘rooms,” Mr. Speck wrote.  “People complain that all of these plans have been rejected by Memphis in May as conflicting with its needs, specifically the demands of its large concerts and barbecue cook-off.  Conversations with Memphis in May suggest that such a reconfiguration of the park is not at all in conflict with its needs, but that prior design efforts have not included the organization as an active participant…there is good reason to expect that a new design effort that acknowledged Memphis in May as a key client could produce at satisfactory ‘outdoor rooms’ proposal.”

Several years ago, RDC President Benny Lendermon said Tom Lee Park was the worst riverfront park in America.  We said then that he was right then and he’s still right today.  Adding Beale Street Landing as an appendage to it and as a connector to what hopefully will be a transformed riverfront in only a few years, beginning with restoration of the cobblestones, does nothing to improve Tom Lee Park itself.

As much as anything, Beale Street Landing simply magnifies the lack of imagination that has been applied to the park since the days when it was expanded to its present 25 acres.

Mayor Wharton said years ago that he was dead serious about implementing the recommendations in the Speck report, but unfortunately, the recommendations were never implemented.  Improving Tom Lee Park was a giant missed opportunity to do something really special on the south end of its riverfront.

Turning Tom Lee Into A Park

Here’s our January 17, 2012, post about the park, and unfortunately, it remains just as relevant today:

Tom Lee Park is a room with a view.

It’s a magnificent view but the room is empty.

That’s because Tom Lee Park is essentially a field without any activity beyond the month of May or anything to make it more than a spectacular backdrop for joggers or more than a photo op for visitors.

Expanding the Vision, Not Just the Size

When the park was expanded from a four and half acre sliver to 25 acres in 1991, it was about engineering, not placemaking.  Carol Coletta, urbanist and city expert, said: “Tom Lee Park was an incredible civic gift from the engineers, but from the perspective of the visitor experience, it’s a wholly inadequate park.  The question is ‘how do we take that asset and make a park that lives up to its location?’”

It’s a question that came up in meetings about “how to build a world-class riverfront”  conducted for the Riverfront Development Corporation by Caissa Public Strategies.   Paige Walkup of Caissa said: “People say they enjoy the space, but there’s so much to be done to heighten the experience. Someone said that after she’s taken her child to see the view once, she has more to do in her neighborhood park.”

About a decade ago, city traffic engineers kicked off a controversy when they proposed to widen and straighten Riverside Drive, once again underscoring the words of former National Endowment for the Arts Director of Design Jeff Speck who said three years ago that “Memphis should not leave the design of the city to traffic engineers.”

As part of the process to consider Riverside Drive’s options, Frank Ricks of Looney Ricks Kiss Architects prepared some rough drawings of three “rooms” at Tom Lee Park that responded to the needs of Memphis in May.  “The park’s so long and linear and the three rooms could be created by trees or by an allee of trees lined up with the bluff stairway,” he said.  “It’s a world-class view, but it’s barren.  It needs something to give it context and human scale.” 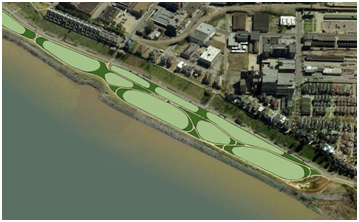 Mr. Ricks’s ideas also included performing space on the hill on the south end of the park, ways to get closer to the river, and a better urban edge that removes the overgrowth of shrubs and plants at river’s edge.  Ms. Coletta said the park could benefit from a variety of landscapes, paving materials, and uses.

Landscape architect Ritchie Smith, referring to the ways the land can be contoured to make it more interesting, said: “If you assume Memphis in May remains there, I wonder if there are gentle land forms that could be created to make the park more interesting.”

Adding More to Do

If the decision was made to move Memphis in May, he said a master plan should be developed.  Ideas could involve more trees and plantings, improved restrooms and pavilion, places for children to play, picnicking, sand beach volleyball, zones around the Tom Lee sculpture and obelisk, all park benches on pads adjacent to the sidewalks, and sculptural and dramatic land forms “to break the park into distinct areas to create definition so it’s not an undifferentiated treeless lawn with a monotonous topography.”

Second, there is an absence of the kind of programming and activities that distinguish great public spaces.  At Tom Lee Park, there is no programming beyond the three weekend events of Memphis in May.

“It’s all or nothing,” said Ms. Coletta.  “The park is programmed during Memphis in May, so today, we have a crescendo of activity and then we leave it as barren festival grounds for the rest of the year.  I’m all for Memphis in May remaining downtown, but if it were mine to do, I’d move it out of Tom Lee Park.  The park is one of our greatest untapped civic assets and it can be a great place.”

Today, Memphis squanders its potential to develop a park that lives up to one of the most spectacular river views in the U.S.  Twenty years ago, Memphis backed into the decision for Tom Lee Park to be our festival grounds, but facing the opening of Beale Street Landing, it seems the perfect time to consider how Memphis can turn Tom Lee into a park.

Prescription for City of Memphis Government: IT Innovation 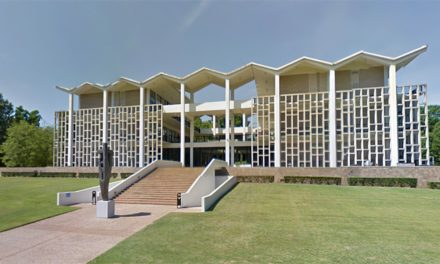