War Or Health Care: A Debate About National Values 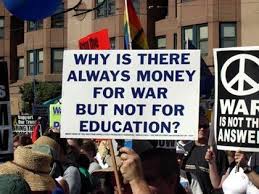 Why is it that there’s always more money for weapons and war but not for people and human need?

It’s been hard for years to ignore that feeling with the Republican Congress.

Anytime there is a proposal to spend more money to help people, there suddenly is an insistence that the United States can’t afford it.  We’ve heard it over plans for a greater investment in urban redevelopment, public transit support, and now we hear it shouted from the rooftops by Speaker of the House Paul Ryan and his minions about health care insurance.

In a dazzling display of spin, Mr. Ryan praises his anti-health care bill for reducing the deficit by $337 billion over eight years, or $33.7 billion a year.  Never mind that in that same period of time, 24 million Americans will be uninsured.

And yet, there wasn’t a peep from him about President Donald Trump’s plan to increase Department of Defense spending by $54 billion – that equates to 80% of the total Russian military budget – and over 10 years, that would amount to a $540 billion increase as Mr. Trump pursues what he calls “one of the greatest military buildups in American history.”

$1.6 Billion A Day For Military

Lost in the fear-mongering and overheated rhetoric is this fact: the $600 billion dollars spent yearly on the military is more than the next seven biggest spenders combined – China, Saudi Arabia, Russia, United Kingdom, India, France, Japan, and Germany.  If the Trump increase is approved, the U.S. will account for almost 40% of all spending in the world for military.  Russia accounts for 4%.

Mentioned in the same breath any time “entitlements” are brought up is the assertion that they will ultimately collapse our country unless they are drastically cut.  It surfaces dependably anytime someone in Congress suggests more money for safety net programs and is quickly followed by hand-wringing about the national debt.

As for that debt, federal debt interest payments as a percentage of total federal outlays is 3.2%.  After the Great Recession, it reached almost 10% but it is about at the average percentage again.  As for those supposedly halcyon days of the Reagan presidency, the percentage was an average of 3.85% during his eight years in office (peaking at 5.9%).

We’re not saying that the national debt doesn’t need attention and plan to reduce it, but we are saying that it’s strange that we only seem to hear about it when there’s a proposal for more spending to improve and protect the lives of Americans.

All in all, it seems that the drumbeat about the national debt is as much about “starving the beast” and the “deconstruction of the administrative state,” and once again, the chosen approach is about engendering fear, dread, and dismay because a more reasoned discussion would not create an emotional stampede and an environment of “alternative facts” in which context and logic are obliterated.  For example, it creates the hoped for chaotic, fearful backdrop in which the budget for clean air and water can be slashed more than 25%; foreign aid, which only makes up about 1% of the budget, can be treated as if it’s tipping the scales;

“With 20 trillion dollars in debt, the government must learn to tighten its belt,” Mr. Trump says, adding that all that tightening must come from non-military, nondiscretionary spending, or put another way, it must come from services to Americans.

All of this subterfuge is on display again with the American Health Care Act – the Republican answer to President Barack Obama’s Affordable Care Act – in which $274 billion in tax cuts would go to the richest 2% of Americans.  It’s not like we should really be surprised.

Tax cuts in the federal budget are like PILOTs on the local scene: they are never treated as real money.  In conservative Washington, while there is gnashing of teeth about the debt and size of government by conservatives, it is not even mentioned by them hat tax breaks now amount to $1.22 trillion, or enough to fund all discretionary spending by the U.S. government.

And the fact that the rich will get a windfall while $880 billion is stripped from Medicare is cause for celebration with Mr. Ryan.  In truth, his American Health Care Act isn’t a health insurance program at all.  Rather, it is a regressive tax rate cut benefiting the wealthiest Americans and by hiding it inside the Obamacare replacement, it was thought that it would be easier to pass.

Some of Mr. Ryan’s Congressional critics insist that health care is not a right and that the federal government has no business putting together a health insurance program, leaving it instead to market forces. Of course, the government already is involved in all employer-provided insurance through favorable tax policies, but when it comes to poor people and people in need, suddenly, the market is treated as inviolate.

We are not saying that President Obama’s Affordable Care Act was perfect.  It wasn’t. Rising costs and access to choices in plans were problems before Obamacare was put in place, and they remain unsolved and will continue in the future.  Despite the rhetoric and the Big Lie, the Affordable Care Act is not a “complete and total disaster,” as Mr. Trump has said.

But here’s the thing: Obamacare represented our vision of American and our aspirations of ourselves.  It embodied the belief that every American, regardless of how much they earn or where they live, deserves quality health care as a right, and that a country as wealthy are ours – which can spend $6 trillion every 10 years on the military – should be able to afford to make it happen.  Even President Ronald Reagan said that health care is a right.

After all, of the 35 countries that are members of the Organisation for Economic Cooperation and Development (OECD), only two countries do not have universal health care: Mexico and the United States.  Meanwhile, the U.S. has the most expensive health care system in the world by far – two and a half times the average of all OECD countries and twice as much as France and Germany.

The facts are unlikely to slow down the health care train barreling through the U.S. House of Representatives, at least if Mr. Ryan has his way.  It will continue to embrace a cynical view of putting ideology over democracy since most Americans oppose this Darwinian approach to responding to the health care needs of the public.  It’s little wonder that the national associations for hospitals, doctors, and nurses came out in opposition to Trumpcare.

As things move ahead,  be prepared for more overblown rhetoric and revisionist history of Obamacare, but most of all, listen to how differently the health care needs of Americans will be treated when compared to the military-industrial complex.  At the same time that our military is prepared to intervene in the lives of people around the world, the federal government is preparing to tell the poor, the elderly, the disabled, and the addicted to fend for themselves.

In that way, the AHCA isn’t a test of whether our country can provide health care.  It is about whether our country can live up to its values.  Setting in place a health care plan that lets the free market decide who lives and who dies may be the values of people who see capitalism as the overriding purpose of government, but it gives new meaning to Samuel Johnson’s comment that “patriotism is the last refuge of a scoundrel.”

Or as distinguished Memphis economist David Ciscel said: “When economists talk about the ‘opportunity cost doctrine’ in class, most students’ eyes just glaze over. But that doesn’t mean it isn’t true. You can have a giant military OR a caring state, not both.”

One Reason the Poor Have Less Political Clout