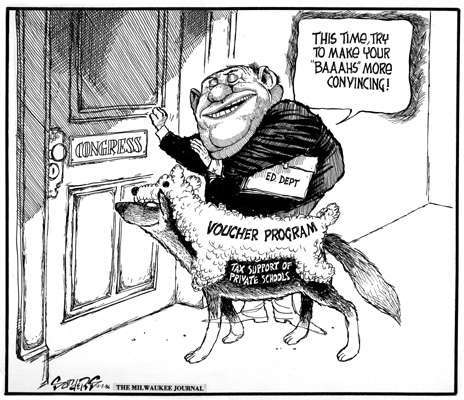 We’re simply unable to join the growing push for school vouchers, chiefly because it’s simply impossible for us to imagine that the Tennessee Legislature is really motivated by an ultimate urge to support schools, much less new U.S. Secretary of Education Betsy DeVos.

After all, in Nashville, Sen. Brian Kelsey, the legislator who introduced the first voucher bill six years ago, is the same one who compared Memphis public schools to slavery. Plus, we remember all the other vitriol by leaders of the legislature that demeaned teachers, stereotyped urban students, and emphasized sound bites over sound policy.

Sadly, much of the discussion has centered on two ideas: 1) public schools are bad, and 2) any program that takes students out of them is good.

We’re not saying that we shouldn’t experiment with innovations in education or saying that many of the advocates for specific changes aren’t sincere and don’t care about the future of students and schools; however, more often, blind pursuit of a right wing politics is pushing ahead an agenda that includes vouchers despite credible research questioning their effectiveness.

Who Vouches for the Vouchers?

In other words, the Tennessee Legislature has already proven that they see public schools as vehicles to inculcate students with their doctrines, including mandates for teachers to teach religious beliefs rather than science, abstinence-only sex education that prohibits the discussion of almost anything related to sexual relations, and to ban the word, gay, from Tennessee classrooms.

That’s why it’s hard for us to imagine that this group’s interest in vouchers is truly motivated only by their passion for the power of education. More to the point, it gives rise to suspicions that the vouchers, more than anything, are ultimately a way for state government to support religiously oriented private schools.

We were willing to suspend our disbelief for awhile because some people we respect have shown interest in vouchers, but in the end, we believe that the potential downside from this social experiment (the kind the Tea Party legislators say they abhor) far outweigh any potential upside at this point.

In January, 2013, Dr. George Lord, educational researcher and academician, wrote on this blog: “Central to their argument is that students will do better in a private school than in a public school.  Since these private schools are not subject to the same testing requirements as the publics, which this ideologically driven group holds as the proof, how do they know there is a better outcome than that of the publics?  Simply put, they don’t. “

Or as Jon Alfuth, former blogger at Bluff City Education, wrote in January, 2014: “But what does the evidence say about the impact of vouchers on student outcomes?  To date we’ve seen little to no positive demonstrated impact on student achievement from these programs.  In 2010, the Center on Education Policy reviewed 10 years of voucher research and action and found that vouchers had no strong effect on student achievement.  The most positive results come from Milwaukee County’s voucher program, but the effects were small and limited to only a few grades.

“Voucher programs also struggle to achieve their mission of providing low-income students with a way out of failing schools.  For example, a critical study of the Milwaukee program found that it overwhelmingly helped those already receiving education through private means.  Two thirds of Milwaukee students using the voucher program in the city already attended private schools.  Instead of increasing mobility for low-income students, the program primarily served to perpetuate status quo.

“Voucher programs have also caused students to inadvertently attend failing schools, thereby maintaining the very problem they are meant to solve.  It’s often difficult to determine the quality of the schools serving voucher students because private schools are not required to make public the same amount of student data as public schools.  An example of this occurring can be found right next door in Louisiana where approximately 2,250 students were recently found to be attending failing schools through the state’s voucher program.”

Since these earlier posts, we know something we didn’t know then and it should make a difference. The iZone schools of Shelby County Schools are outperforming charters created to serve students in failing schools.

It’s reminiscent to us of the days when there was government funding for day care centers, and they sprung up like mushrooms all over Memphis – often connected to churches as a profit centers – but few measured up to standards that guaranteed a positive, nurturing experience for the children in them. More than anything, it was a rush for the cash rather than a rush for excellence.

More than anything, the voucher movement proves that many people, particularly the Legislature, continue to search for magic answers for better classroom performance rather than doubling down on the hard work of increasing teacher salaries, spending more per pupil, making sure that every student has a quality teacher, and most of all, more funding for interventions that can make a difference in the lives of children. Of course, the Legislature is not about to adequately fund these safety net programs.

The voucher bill, as written, only applies to students in failing schools, but if you need any indication about how much reliance can be put on this, it can be seen in the concerns by the suburban school districts which have not given their full support to their own legislators’ voucher legislation. Alternately begging and threatening their constituents, suburban legislators are greeted with a healthy dose of skepticism from the people who know them best.

The most frequently raised concern by the town school districts is that the voucher law is just the beginning and that the Legislature will move to broaden the law as other states have done. It would seem that if the legislators are serious in their claims that the present bill will not be expanded, they could write some restrictions in the present law to make that the case.

Then again, there are many questions left unanswered by the law in the Tennessee Legislation. There are issues related to lack of oversight, lack of context, and lack of serious thinking about the financial implications for school districts on issues like OPEB pension liabilities. Supporters of the vouchers have said that these questions will be addressed and that they share concerns about them, but if that is so, why not address them before passage of vouchers? Surely, at this point, if we have learned anything about some school reforms, it is that once one in place, it is difficult to get the reformers to reform the reforms.

But the biggest dose of skepticism is about whether vouchers work. The Brookings Institution wrote: “In Louisiana, students who won a lottery for tuition scholarships to private schools wound up with worse academic performance than their peers who were lucky enough to lose the lottery.”

Here’s what the think tank concluded in its cautionary commentary about Louisiana, whose voucher program was launched in a similar student demographic as ours: “A voucher lottery provides an unusual opportunity to measure the effectiveness of private schools. The lottery serves as a randomized trial, which is the gold standard of research methods. Random selection means that lottery winners and losers are identical, on average, when they apply for the voucher. Any differences that emerge after the lottery can therefore be attributed to the private-school attendance of the winners.

“The results were startling. The researchers, a team of economists from Berkeley, Duke, and the Massachusetts Institute of Technology, found that the scores of the lottery winners dropped precipitously in their first year of attending private school, compared to the performance of the lottery losers. The effects were very large: roughly a quarter of a standard deviation in math, social studies, and science. There were no effects on reading scores. On a per-year basis, these negative effects are as large as the positive effects that a similarly-designed study found for charter schools in Boston…

At the very least, the results suggest that the participating private schools need to provide far more support for voucher students when they enter. If the voucher students continue to perform poorly, Louisiana needs to overhaul the criteria used for including schools in the voucher program—or shut down the program altogether.”

Just last month, another study confirmed the conclusion that the results for students with vouchers was dismal.

But stay tuned.  We’re betting that facts do not stop voucher advocates from plowing ahead with vouchers as the centerpiece of their “agenda to improve public education.”  When they do, we’ll know conclusively that it’s not about the kids but something else altogether.