Sorry, But Trump’s Election Is Personal 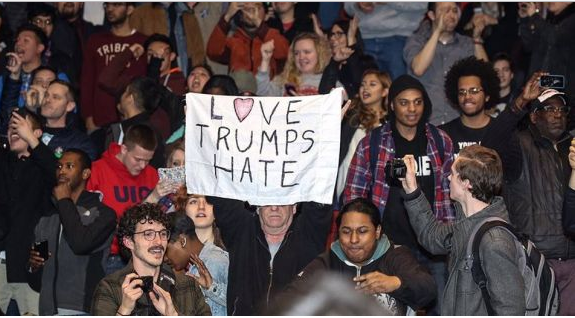 It is inconceivable that the president of the United States could be someone my granddaughters cannot respect.

But that is precisely where we will be January 20.

That is why all the platitudes about uniting to support the new president, about the American example of presidential transition, and about giving him a chance to be successful fall flat with us.

For us, this was never a philosophical debate or a battle between differing political points of view.  We’ve engaged in those for years.

Rather, this time, it was personal.

It was about what kind of country we want the United States to be, but more to the point, it was fundamental principles we hold true.

As the quotation attributed to Thomas Jefferson said: “In matters of style, swim with the current.  In matters of principle, stand like a rock.”

That’s why it’s not possible for us to treat this as an ordinary presidential election.   We’ve been on the losing side of elections before and while we were disappointed, we accepted the outcome and wished success for the new president.

But none of these presidents displayed vile behaviors that insulted morality and defied norms about what is right and what is wrong.

It is not possible that we can now be tolerant about intolerable behaviors and explain later to our granddaughters that in the wake of the election, we simply moved on and ignored his crass and repulsive behavior and the countless comments boasting about it.

We cannot now simply pretend that he did not vilify Latinx and Black Lives Matter.

We cannot merely forget hate language that disparaged and defamed millions of Americans’ religion and race.

We cannot overlook rhetoric that treated cities, particularly neighborhoods where African Americans live, as centers of crime, poverty, and ignorance.

We cannot pretend that we are not rejecting American values by rejecting immigrants fleeing for their lives.

We cannot shed our principles now as easy as evangelicals casting their ballots for Donald Trump on election day.

These words and actions are not simply beliefs and factors defining a political point of view.  These are the things that characterize personal character and ethics, and if we refuse to shrug and accept them in a friend, how do we now accept them in our president?

Here’s the big difference between those of us living in urban areas and those in rural areas who turned out to vote for Donald Trump.  We know people in all the groups that have been mercilessly attacked by him.  They are not abstracts to us.  They are friends, family, neighbors, and community leaders.

And because of it, our lives are richer – our individual lives and the lives of our cities – and for us, the hate-filled campaign speeches target people we know.

That too is why we cannot treat this as a normal election.

There are too many potential consequences for people we know, and it is why people are marching in the streets and why many of us vow to join them to protect and support LGBTQ, Latinos and Latinas, Muslims, immigrants, African Americans, and others treated as “the other.”

So much of Mr. Trump’s rhetoric was designed to capitalize on the image of cities as dangerous and sources of the nation’s ills because of their diversity and divergent peoples.  It also seems that the farther someone lives from a city, the more they fall prey to the notion that city residents are somehow different and less deserving.

Clearly, our urban experiences give us a different worldview – and also a different attitude about looking squarely at problems and working to solve them.  (Take a look at the second map to see how different cities are in their voting.)

It speaks to our failure as lovers of cities to explain why cities, not states, are the “laboratories of democracy” that are working for policies that create fairer, more equitable, more livable places and that in the end will drive the overall success of this country.

Somehow, the conspiracies, the alt-right propaganda (that now moves into the White House), and the victimization of the racial and religious majority have managed to drown out the facts about the real reasons that the rising tide is lifting all yachts and that the middle class boats have been paddling against the current for decades.

Those of us who care about cities have been crying out for change for decades, but some politicians – including our president-elect – have managed to create an “us versus them” attitude in which the shared interests of urban and rural middle class families are put on different sides of the table so that the money-infused special interests can control a political system that profoundly benefits them.

What’s been missing in these discussions is a primary fact: cities and their regions are the drivers of the American economy (small cities and rural areas only account for about 20% of the total GDP).  The lack of a prevailing urban agenda and the money approved by Congress to back it up are ultimately not a price just paid by urban centers, but by the entire United States.

That this inexorable dependence on cities is not only misunderstood but unappreciated is testament to how skillfully the wedge has been driven between urban, suburban, and rural Americans.

The Talmud says that “whoever saves a life…is considered as if he saved an entire world.”  That is the sentiment that motivates us in the months ahead.

We set out to do what we can do by fighting for each person in Memphis.

Few cities in the country have more experience dealing with narcissistic, narrow-minded, and intemperate ideologues. We have years of experience in dealing with the politicians in charge of state government whose overreach into local decisions knows no bounds.  In its way, the Trump platform is an extension of the rhetoric and retribution politics seen so often by the super-majority in the Capitol.

So, here’s where we are: we are moving through the five stages of grief, but we admit today that we will never come to grips with the last stage – acceptance.  That will not happen, and we have no patience with Trump loyalists who now call on us to unite behind the president-elect when he has sowed the seeds of divisiveness, sexism, bigotry, and hate.

It is a convenient point of view for the loyalists.  Where was their concern about uniting this country when they had their chance to emphasize how we are all in this together and there is more to bring us together than to break us apart?

The political cynicism in creating fear and then capitalizing on it is in a word, unforgivable.  That fear resonates in this country and has become a defining force in the lives of too many children and families.

It proves once again how fragile democracy can be.  That’s why we refuse to flirt with the cracks in liberty caused by a president whose character is anathema to who we are as a nation and who puts egotism ahead of patriotism.

We do not criticize those who now set aside the results of this election, but we cannot ignore the fear that so many of our fellow citizens share, the insults that have been directed at women, and 15 months of insults and slurs endured by friends and family that leave them looking to the future with uncertainty and trepidation.

Because of them, the election of this man is not conceptual or theoretical.  It is personal, and that will not change.

Rather, it now becomes motivation to do more, to call out bigotry in all its forms, to work for the kind of change that improves everyone’s lives, to fight sexual harassment, and to be relentless forces for American values that we profess to hold dear.

Decisions That Made Us Who We Are Today, Part 1