Taking The Time To Get The Pinch District Right 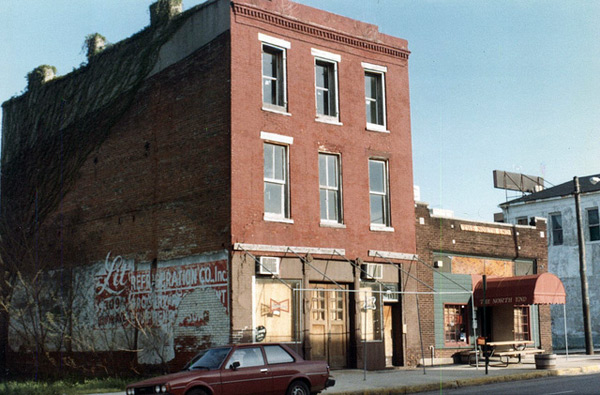 The proposed moratorium on development in the Pinch Historic District may be 25 years too late, but it’s better late than never.

That’s why we think that Memphis City Councilman Berlin Boyd’s call for a moratorium is the right call at the right time.  There’s no better cautionary tale for the need for a moratorium than what history should have already taught us: when the market is left to its own devices in the Pinch Historic District, the results can be devastating.

At the time that The Pyramid was under construction, the Pinch District had 43 historic and interesting buildings, and city and county governments believed that left to its own devices, the market would create new businesses, more jobs, and more vibrancy there.

Instead, the market created parking lots – lots of lots.

The number of buildings in the meantime declined from 43 to 19 and fell to the point that Tennessee Historical Commission considered removing it from the National Register of Historic Places.

We know that the character of the Pinch District fundamentally changed because there was no master plan for it when The Pyramid opened and the intervening years have not been kind to it, but we the notion by the state historical commission that it should be removed from the list was short-sighted and indefensible.

Apparently, the public here sent the unmistakable message to the commission that the Pinch is near and dear to our community, and ultimately, the Historical Commission put the removal in an indefinite holding pattern.

We hope Councilman Boyd will stay strong with the moratorium idea, because much of the  resistance seemed to stem from pique, self-interest, and turf protection rather than how best to protect, preserve, and improve the city’s historic Irish and Jewish neighborhood as an integral part of our Convention Center neighborhood.

Music To Our Ears

The purpose of the moratorium is straightforward: it preserves the status quo for a specified time until a land use and design strategy can be developed and adopted.  It gives a city the chance to develop land use rules and hold any development in abeyance until it can respond to the new plan.

In Nashville, a moratorium on development is in effect for Music Row until mid-2016.  It was the site of RCA’s famed Studio B, and frankly, there is no comparison to the historic significance and opportunities to redevelop Pinch Historic District into a blend of historic buildings with existing businesses that weathered the storm and with infill development that is historically appropriate for the area.

Seven years ago, Shelby County Government approved a moratorium for nine months for the unincorporated area as county government worked to come to grips with the financial implications of sprawl.   It was too little too late, because the genie was already out of the bottle when it came to unsustainable land development.

Meanwhile, every month, cities and counties across the U.S. are passing moratoriums so that they can step back, take a breath, and be thoughtful about an important development opportunity.  These are local governments who want to get the decision right, and we can’t think of a neighborhood in Memphis that deserves this more than the Pinch.

With implementation of a moratorium, Memphis has the time to conduct a community process to consider the best future for Pinch District, including time to revisit ideas completed years ago by the Downtown Memphis Commission for six sub-districts, to consider whether the planning department’s special purpose district for the Pinch has any impact or whether there is as little commitment to special purpose districts as to overlay districts, and to consider a full plan of actions that can move the Pinch toward its potential.

To suggest that somehow the market will respond to opportunities in the Pinch District in an enlightened way is nothing short of magical thinking.  It’s also wishful thinking, since if nothing else, the events when The Pyramid opened send a harsh lesson worth remembering. Instead of hoping that the right things are done, we need to determine what those right things are and align incentives and regulations to encourage and ensure that they happen.

Surely, no one is more interested in the Pinch District plans than its largest landowner: St. Jude Children’s Research Hospital.  It has said in the past that it cares about the future of the neighborhood and about creating a positive front door and experiences for its patients and their families.

That said, we’re motivated to support a moratorium for the benefits for some of the small landowners, people who have withstood the decline of the Pinch District and soldiered on.  These business owners deserve the opportunities for their property values to increase as the area becomes more successful with the implementation of a smart design and development plan.

A Mistake Out of the Box

Instead, the first idea out of the box showed how precipitous it can be for them.  It was the proposal for a discount, extended-stay 108-room hotel more appropriate for Sycamore View than the Pinch District.  It is precisely the wrong idea for the district and sets a low bar that could inspire similar ideas anchored in the lowest common denominator.

While it’s a wasted opportunity to get the rebirth of the Pinch off on the right foot, the discount hotel proposal also provides hotel rooms that have absolutely no positive impact on improving business at the Memphis Cook Convention Center.  As Memphis Convention and Visitor Bureau Officials often emphasize, what Memphis lacks to be competitive are full-service hotel rooms, but in addition to not delivering this, it does nothing to improve the convention experience that convention goers say they want in the immediate neighborhood.

Put simply, because of City of Memphis’ ownership of the convention center and its $83 million investment in The Pyramid, it is appropriate, as recommended by Councilman Boyd, for the city to take the lead in ensuring that a smart master plan for the future of the Pinch District is developed.

It’s an opportunity we can’t afford to maximize.  The opening of Bass Pro Shops at The Pyramid is delivering millions of people to the Convention Center District, which is the site of the downtown Tourism Development Zone, and already, more than 500,000 customers showed up in the first 27 days.  The average Bass Pro Shops store attracts almost two million customers a year, and it’s obvious that The Pyramid will reach and exceed the average.  Already, the number of customers and revenues are exceeding projections.

With implementation of a design and land use plan, the Pinch this time could actually benefit from The Pyramid.  Already, there is the plan to construct a pedestrian bridge to Bass Pro Shops (the previous bridge was not seismic or ADA compliant, but more to the point, it didn’t connect with an entrance into the building) and it and other public improvements should be located  and determined within the context of the plan.

The really good news is that Bass Pro Shops is not only creating enough incremental sales taxes to pay for itself, but the TDZ will produce enough revenues to pay for infrastructure needed to upgrade the Pinch District in hopes of attracting a developer that can implement a plan that calls for working with the existing businesses to create something as special as the district was when Memphis was only a few decades old.

In Nashville, the moratorium was implemented to give the city time, with community input and a clearly defined process, to create a comprehensive design plan for Music Row.  That seems a worthy goal that the Pinch Historic District deserves just as much.

Broad Avenue Gets $350,000 for Water Tower and Programming