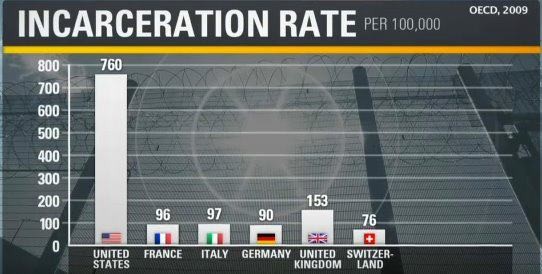 The incarceration rate for the Memphis MSA is about 80% higher than the Atlanta region and more than three times higher than Birmingham region.

It’s little wonder that Memphis was ranked as the worst city for single 25-34 year-old women to find an employed man.  For every 100 women, there are 59 employed single men, according to Pew Research Center.

It’s been said that the Memphis MSA’s incarceration rate is unfairly elevated when compared to other cities because of the federal prisons in our region.  There are FCI Memphis, which includes the federal prisons north of Shelby Farms and the prison camp at Millington, and the West Tennessee Detention Facility at Mason, which is the CCA-managed facility for U.S. Marshals Service, Immigration and Customs Enforcement, and Department of Homeland Security. But when you back out the 2,000 prisoners held in those facilities, it barely affects the incarceration rate for the Memphis MSA.

But there are also the state prisoners held at the Shelby County Correction Center and the Shelby County Adult Offender Center who are kept in this community rather than going to prisons in other parts of the state.  While almost every prisoner in these county-operated prisons are from Memphis and Shelby County, even if you subtract the 3,400 inmates there from the incarceration rate, the Memphis MSA rate remains proportionally in the same position when compared to the cities mentioned in the first two paragraphs.

Although the percentage of the MSA population that is African American and Caucasian is about the same, African Americans are incarcerated at a rate that is four and a half times higher than Caucasians.

Without more information, it’s difficult to draw any conclusions from the raw numbers, but our suspicion is that the regional emphasis on a “lock ‘em up” approach to fighting crime is a large contributor to our high incarceration rate.

The other conclusion we draw from the numbers is that former Shelby County Mayor Bill Morris was right 25 years ago when he said that we could not build enough jail cells to get to a much lower crime rate.

And yet, we’ve doubled down on an “arrest and lock them up” philosophy and if anything is obvious from the incarceration rate, it’s that it’s impossible to draw a correlation between locking more people up and reducing the crime rate in a long-term way.  In the end, the lack of an equal emphasis on intervention and prevention through a regionwide commitment to early childhood development; family-based, individualized answers to families’ challenges, and pre-K in the end is the most costly approach to reducing crime.

For years, The Urban Child Institute has pointed out that as a community, our spending on education begins in elementary school and climbs dramatically until college, but only about 2.5% of the total is spent in the first three years of life when the foundation for social and emotional development is being laid and children’s brains are growing to 80% of their adult size.

We suspect the same funding curve exists for non-police strategies to reduce crime.  Today, about a quarter of a billion dollars a year is spent by Memphis Police Department, while other programs like the teen learning center, ambassadors program, afterschool programs, and youth programs represent petty cash in comparison.

Much of the needed prevention and many of the interventions could take place in city parks, community centers, outreach programs, youth programs, and libraries, but then again, there’s no money because their budgets have been sacrificed on the altar of crime suppression.

As the City of Memphis Five-Year Fiscal and Management Plan said (and it applies to the entire region): “Crime reduction requires a balance between investments in prevention and policing to achieve crime reduction based on research and cost-benefit analysis.  If the City chooses to continue its reliance on policing as its primary means of achieving crime reduction, it must find a way to pay for it – the current method is fiscally unsustainable.

“The link between the number of police officers and crime rate reduction is, at best, elusive. Different studies have found different relationships and data suggest variation by city. Other approaches related to crime prevention, prosecution and punishment may have as much, if not more, of an impact on crime reduction and often come at a lower cost than sworn police officers.  Memphis remains an outlier in the size of its Police Department when compared to other cities with 500,000 or more residents that have achieved the greatest reductions in violent crime rate over five years.”

It will take years of research to understand what’s caused national reductions in crime, and already, there is vigorous debate about the reasons, including improved law enforcement strategies (particularly through better use of technology), a declining birth rate, the public’s use of technology, the waning of the crack cocaine epidemic, the graying of America, and even abortion.

What all of this means to us is that we can’t keep doing the same and expecting different results.  Rather than continuing to plow more and more money into police budgets, it seems an appropriate time to broaden our attack on crime to include more interventions and prevention strategies.

If it can work in New York City, surely it can work in Memphis.  The Big Apple has achieved record low crime rates while reducing the size of its police force.  Instead of adding more police, it focused on interventions.

It’s a lesson worth learning in our region.  The costs of having one of the nation’s highest incarceration rates ultimately drains money from government budgets that could be much better spent on public education, quality of life, and reducing the tax rate.

Then again, there is also the reality of about 7,000 former felons who return to our region every year, and the need for create re-entry programs with meaningful options to earn a living and support themselves and their families.  But that’s a blog post for another day.