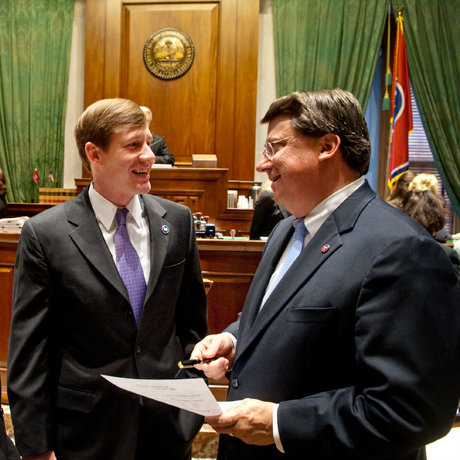 Sometimes, it’s just hard to understand how some people can sleep at night.

Certainly, last night, guilty consciences should have made Tennessee Senators Mark Norris and Brian Kelsey sleep fitfully after a day when they kept 288,000 of their fellow Tennesseans from having health care coverage.  It is inarguable that as a result, hospitals will close and people will die.

Even in a world where we are used to seeing political egotism trump sound public policy, their pride in destroying Insure Tennessee – Governor Bill Haslam’s common sense Medicaid expansion plan – sets a new low in cynicism, putting their personal political ambitions ahead of the health of so many of their fellow citizens.

While many of us were already shaking our head yesterday over the protocol-busting prayer to open the Tennessee Senate by a member of the Christian Taliban, it was merely foreshadowing for the anti-Christian votes that were to come in the Senate committee that voted 7-4 to prevent the Tennessee Legislature from even having an opportunity to have a conversation with each other – and the citizens of Tennessee – about the Haslam plan.

When “true believer” June Griffin on Rhea County delivered her partisan opening prayer, she prayed to God (as she went down the greatest hit list for right wing extremists) for the defeat of the governor’s proposal to provide $1 billion in health care coverage for poor Tennesseans.  Her startlingly un-Christian views were Darwinian at their core: let the poor and needy – the people her religion calls for her to care for – are on their own in a society governed by the law of the jungle.

Little did we know at the time of her disdainful prayer in response to people who need a little Christian (or Jewish, or Muslim, or Hindu) love and charity, it would be seconded by our state Senate.

More to the point, Kelsey and Norris sent the clear message that their ambitions to be governor know no bounds, overriding the simple of ambition of showing a little humanity to those who need their help.

Both of them labor under the notion that to be governor of the state, you need not display any tendency toward statesmanship.  Rather, you need only aim for the lowest possible common denominator.  Once again, they helped our state to be held up as a laughingstock and why it deserves to be regularly recognized as the worst state legislature in the U.S.

That two senators who should know better are willing to sacrifice decency on the altar of personal ambition speaks volumes for why Tennessee ends up in the lower rungs in the rankings for incomes, health, jobs, and poverty, and if there were a measurement for compassion, Tennessee would end up at the bottom of those rankings as well, if our two legislators are any indication.

The Senate Majority Leader generally has the responsibility of carrying the governor’s agenda on that side of the legislature, but Norris so often does, he was manipulative and calculating, professing his open-mindedness when it came to collecting checks from business leaders in his recent fundraiser while firing a torpedo to kill even the pretense of a fair hearing for Insure Tennessee in the Senate.

Meanwhile, his counterpart, House Majority Leader Gerald McCormick endorsed Insure Tennessee and was handling the Haslam plan, but from all appearances, the Senate has now killed any chance for the House to even vote.

As for Kelsey, there’s hardly anything left to say about his breathtakingly narrow-minded pandering and biased views.  He’s simply an ideologue in the ugliest sense of that term.  Most recently, he enshrined Tennessee’s regressive tax structure into the State Constitution, so families making lower incomes will now forever pay a higher percentage in taxes than families making three times more.

Pragmatism Rather Than Extremism

So, why exactly would Governor Bill Haslam have such a different worldview than these two senators?  The primary reason is because he was formerly mayor of Knoxville, and when someone is a city CEO, they understand that partisan advantage takes a backseat to responding to the needs of your people, needs which you see firsthand every day.

To quote the old axiom, there is no Republican or Democratic way to pick up the garbage.  As a result, city mayors are the most pragmatic politicians in America these days.  They are more pragmatic and less dogmatic than people who sit in their offices in Nashville, where they have  little acquaintance with the impacts of their decisions on real people in real communities.

It’s no secret that both Kelsey and Norris are dazzled by their own healthy self-perceptions and see themselves as material for the governor’s office.  That said, they have probably assumed that Shelby County would be a stronghold for their fundraising for a campaign for the state’s highest office.

Hopefully, the business leaders who wrote checks to Norris just recently have long memories for how he and his Senate colleague shafted 288,000 Tennesseans, including 35,000 military veterans, and ultimately, the taxpayers of Shelby County.   In fact, in the wake of the defeat of Insure Tennessee, business leaders made some of the strongest, most critical statements we’ve seen them make in many years.

Only a few hours before the vote, Shelby County Mayor Mark Luttrell gave his State of the County speech to the Kiwanis Club, making the point that if Insure Tennessee was voted down, it will likely lead to a 10% increase in the Shelby County property tax rate to raise the revenues to close the gap for indigent care at Regional One Health (formerly The Med).

While these two state senators will undoubtedly put together a platform for a potential governor’s run that brags about their opposition to all tax increases, we should never forget that their political cowardice drove up taxes for every homeowner, small business owner, and corporation in Shelby County.

To give them their due, we will refer to this property tax increase from now on as the Norris-Kelsey Tax Increase.

We hope you will join us in making their act of craven political ambition synonymous with the state’s highest county tax rate.  At a time when our economic development officials talk about the problems associated with such a high tax rate, Norris-Kelsey just pushed it higher.

So, next time, you hear suburban politicians like Norris and Kelsey decry high taxes in this community, remember who helped make them that way.