Memphis Region is #70 in Happiness 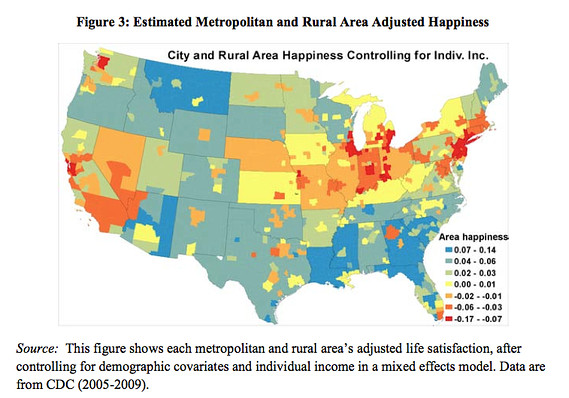 Cheer up, Big Apple residents — New York City is the most unhappy city in America.

That’s according to data coming from a working paper by Harvard professor Edward Glaeser, Vancouver School of Economics professor Joshua Gottlieb and Harvard doctoral student Oren Ziv. They used data collected in a Centers for Disease Control and Prevention survey called the Behavioral Risk Factor Surveillance System, and then adjusted it for age, sex, race, income and other factors. (Such adjustments are important — women, for instance, are happier than men; the married are happier than single or divorced respondents; and so on.)

In short, New Yorkers are unhappiest on an “adjusted” basis; but scoff at those adjustments as you like, they are still third-most-unhappy region (of the areas where there are at least 200 respondents) out of 177 metro areas on an unadjusted basis.

It’d be blithe to say those who work on Wall Street are scientifically miserable. But remember, money buys happiness. So, probably not.

The happiest five cities are all in Louisiana, with Lafayette taking the crown (Louisiana is also the happiest state). The unhappiest cities, after New York City, are St. Joseph, Mo.; South Bend, Ind.; Erie, Penn.; and the Evansville, Ind.-Henderson, Ky. area.

To read ranking, click here and go to bottom of article.

1-Cent A Gallon Gas Tax Is Critical for MATA