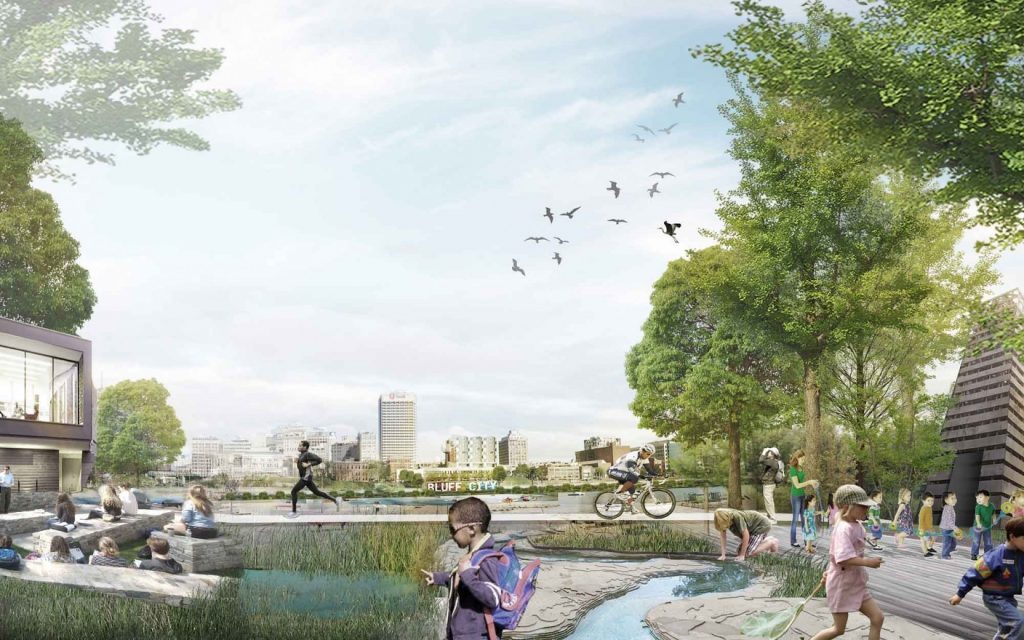 One of the most encouraging changes that has come with the renewed momentum of Memphis has been the emphasis on urban design.

This has not always been Memphis’ strong suit.

However, beginning with FedExForum and Autozone Park and continuing more recently with Shelby Farms Park, Crosstown Concourse, South Main improvements, and Overton Square, a new design consciousness has taken hold, and Studio Gang reminded us convincingly with its exciting riverfront conceptual plan that an emphasis on urban design can be a quality of life game changer.

With the new energy that comes with $9.2 billion in new or recently completed projects, it’s hard to think of a time when there has been more opportunity to make strong urban design a core operating principle for this community.

Best of all, a reenergized Riverfront Development Corporation and Downtown Memphis Commission are making an impact in thinking boldly about our community’s most important public spaces – those that are downtown.

The RDC is making a transition from the Benny Lendermon era to only the second president in the private nonprofit organization’s 18 year history.  Mr. Lendermon has not gotten credit for his enthusiastic support in recent years for placemaking, removing much of the baggage from the early years of the RDC that came with a plan for what became characterized as the private development of the riverfront.

He has been wholly supportive of the Studio Gang concept work, the Civic Commons project, the Fourth Bluff initiative, RiverPlay, and RiverFit, and that support has proven pivotal in advancing a reimagination of the riverfront and in reenergizing the RDC board.

That said, one of the most important hiring decisions to be made in the next few months is the selection of the next president of the RDC, because it presents an opportunity to attract the kind of national changemaker that can mobilize action to capitalize on this unique moment of opportunity for the riverfront.

The Oswalt Era At DMC

Meanwhile, although the Downtown Memphis Commission conducted one of its obligatory “national searches” that once again resulted in the hiring of someone local, the elevation of Jennifer Oswalt as chief financial officer to president seems to have gone a long way to improving morale issues and engendering the camaraderie that had faltered.

We have been impressed by the calm, steady, personable approach she has brought to the DMC’s work, and there is much that seems to be headed in the right direction.  Most of all, she appears to understand that the progress of downtown cannot be bipolar but must also take place in the historic downtown between Poplar Avenue and Beale Street.

DMC’’s recent retreat surfaced a number of interesting, provocative suggestions, but the exercise of convening this kind of conversation in and of itself was an encouraging development.

We weren’t there so we offer a suggestion of our own: the DMC should form and task cross-disciplinary teams of five to seven people (say an architect, a resident, a worker, a planner, etc.) to become quality of control officers for downtown and to do it by walking around.

It seems that downtown could still use some tender, loving care, and while some of the trouble spots we see are not the responsibility of the DMC, these teams would be a way to develop a list of trouble spots, recommendations, and opportunities that need to be addressed by the various public agencies in downtown Memphis.

While we already had a positive attitude about Ms. Oswalt’s leadership, that opinion was deepened by her decision recently to take a step back and regroup after DMC released a proposed Beale Street Archway design that was prosaic and pedestrian.  The blue neon signs read “Memphis, Tennessee” and “Beale Street” and immediately attracted a good share of snark, particularly about the need to remind visitors that they are in fact in Memphis. 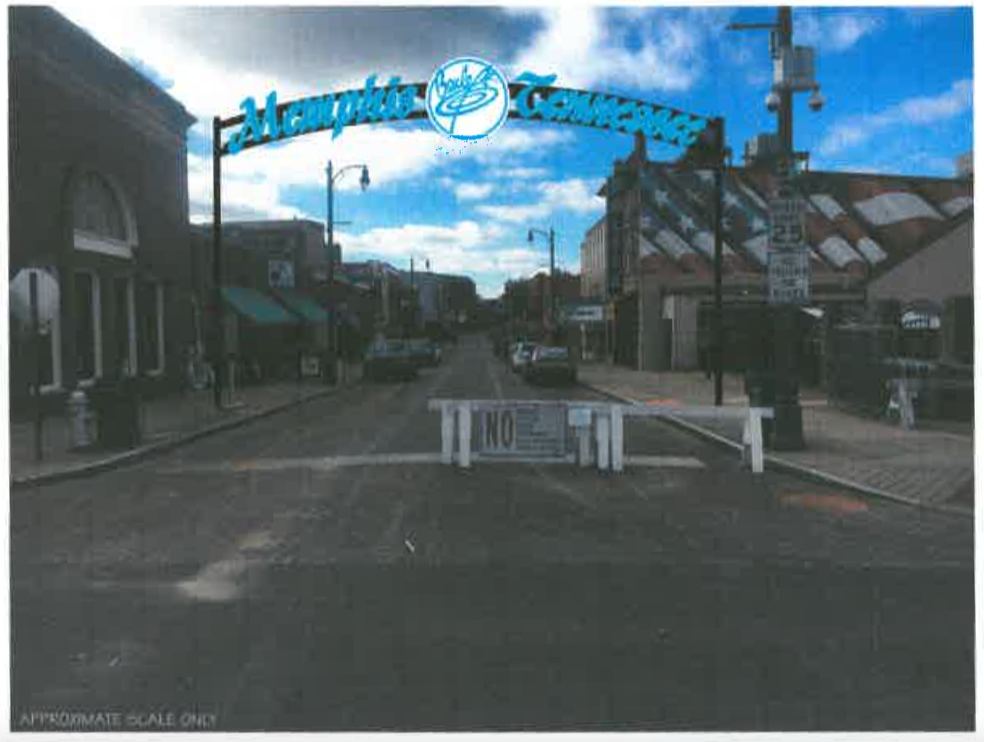 At the time, Ms. Oswalt said that “Beale Street is a national treasure” and deserved further brand emphasis with these prominent signs.  We agree with her, and while it would have been easy for the DMC to move on with the announced design, it listened to concerns about the design conceived by a sign company and launched a design contest aimed at attracting proposals for a design that has more impact and that is worthy of the growing emphasis on high quality design.

While we would have preferred that the design contest had design prizes higher than $1,500 for first prize, $750 for second prize, and $500 for third prize, and that the DMC partnered with the UrbanArt Commission, we commend the DMC for pausing to try to get it right.

That said, it’s time to develop an overall design and signage plan for our most visited tourist attraction.  Already, the neon signs for businesses on Beale Street are favorite photography subjects so however the archway signs are designed, they must not obscure or diminish the existing neon on the street.

As the patriarch and senior expert on marketing and branding in Memphis, John Malmo, said, this sign is an outstanding opportunity for “a classic exhibit of urban area (that) should be a ‘Wow’ such as the bicycle arch at Overton Park.”  It’s hard to state it better than that. 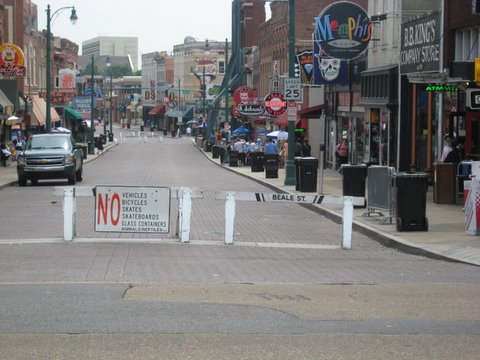 Meanwhile, we assume from the DMC’s interest in improving the entrance into Beale Street that it also plans to eliminate some of the most embarrassing signage used to welcome visitors to any major historic district in the United States (and which even showed up on the first renderings of the now abandoned sign design).

They have been at the main entrances to Beale Street for more than 10 years, and we know this because it was May, 2008, when we wrote about these eyesores.  We wrote: “They look like someone’s first shop class project in high school.  If they are world-class, it is in the category of the most amateurish signage in a famous tourism area.  The Beale Street barricades look like something that was slapped up temporarily and were never replaced.  After 26 years, it’s not too much to think that we can’t come up with something that actually speaks to the quality of the experience on the street.”

We are told that the fact that a barricade was shown in the rendering of the original sign by DMC should not be taken as a sign that they will remain.  We certainly hope that is the case.

It is encouraging that the DMC is focusing on the appearance of Beale Street, and hopefully if the archway sign can’t be done right, it won’t be done at all.  Or at least not until there is funding and a design that ensures that the sign will meet the new expectations for high quality design in this community.

Meanwhile, the DMC announced the good news that Handy Park will be redesigned.  After all,  from the first day it opened, it has not been the welcoming, active kind of place that reflects historic Beale Street in the most positive way.  In this way, it is testament to what happens when there is no attention to urban design.

The DMC is putting emphasis on the right places.  Now for the hard part: actually receiving designs that deserve a place on our city’s most famous street.