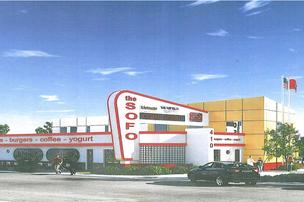 Some months ago, we blogged about the Midwestern visitor during Elvis Week who said that Memphis “doesn’t look much like it loves itself.”

That comment came to mind as we read about the drive-in restaurant approved for construction in the neighborhood of the National Civil Rights Museum and in the Downtown Memphis Commission’s SoFo planning area.

More than anything, the project is the latest evidence that Memphis doesn’t look like it loves itself as exhibited by the city’s “anything goes” approach to zoning, which is no respecter of an area’s character, identity, or ambition.

If there is a poster child for the “benign neglect” of the present system, it’s hard for us to think of one that symbolizes it as well as a project that defies the aim of the South of Forum (thus, SoFo) plan.  That plan was prepared by the Downtown Memphis Commission (back when it was known as the Center City Commission) and envisioned a distinctly urban fabric for the roughly 150 acres.

More Of The Same

Once again, like the McDonald’s plan in the University District, there’s a drive-in restaurant with a distinctly suburban design and personality that is being treated as an acceptable use for an area that was just beginning to attract the right kind of investments.

To its credit, the Downtown Memphis Commission opposed the project because of its jarring impact on the SoFo district and setting a low standard for the nearby South Main Arts District.  Unfortunately, once again, the Memphis and Shelby County Board of Adjustment was used – or more accurately, misused – by planners to get more variances from the Unified Development Code.   (Earlier this year, the Board of Adjustment was at the center of the controversy to  protect a billboard at Cooper and Union that violated the Unified Development Code.)  The purpose of the Board of Adjustment is to hear variances because of serious economic hardship that results from the impossibility of using property.

In other words, the Board of Adjustment was seen as the public agency that would consider a variance to zoning regulations if the application of Unified Development Zone regulations would result in exceptional practical difficulties or exceptional and undue hardship upon a property owner. This kind of hardship could result from physical characteristics which make the property unique or difficult to use, but the Board of Adjustment, in approving an application for a variance, would need to find that granting the request would not cause substantial detriment to the public good and would not be inconsistent with the general intent and purpose of the Unified Development Zone.

Put simply, the Board of Adjustment should be hearing true hardship properties, but these days, it’s hearing applications for variances that are more about convenience that equity.  Because of it, the members of the Board of Adjustment, appointed by Memphis and Shelby County mayors, are being used to hear applications that should never come before them in the first place.  In addition, approval of variances places the public at a disadvantage because the only avenue of appeal is in court.

Imagine If They Had A Real Problem

So what exactly was the serious problem that threatened the economic viability of the project at South Third and East Butler?  Two drive-through windows and parking at the side or rear of the building.  That incredibly was the basis of the application for “relief” from the requirements of the Unified Development Code.   Plans submitted to Shelby County Office of Planning and Development call for a 10,573-square-foot, two-story building for an office suite, cyber cafe, beverage cafe, deli/yogurt shop, and convenience store with 68 parking spaces.

To suggest that the nature of the property at South Third and East Butler would cause substantial detriment to the developer – and thus a proper applicant to be before the Board of Adjustment – is in a word, ludicrous.   The fact that the Downtown Memphis Commission opposed the variances says volumes about the project’s negative impact and speaks to the Commission’s better stewardship for the area.

All in all, the use of the Board of Adjustment has the earmarks of a cynical ploy designed to give a developer an expedited process and to keep decisions from being made by elected officials on the Memphis City Council.   In a system that already overuses planned developments – long a serious problem for neighborhoods because of the insensitivity of zoning officials to the problems wreaked by PDs, it means that the skids are regularly greased for developers while neighborhoods’ interests are generally marginalized or treated as nuisances.

The continuing problems related to PDs were mentioned often during development of the Unified Development Code, and the consultants suggested that one of the benefits of the new code would be that would be to stem the overuse of Planned Developments.

It’s hard to find a major city that uses PDs as broadly or as routinely as Memphis, and unfortunately, nothing has changed in spite of the passage of the Unified Development Code.  PDs were designed to replace existing zoning districts with innovative developments and to allow important public benefits like increasing open space or protecting the environment.

In other words, PDs were intended to be rare – and that was certainly a principle embraced in the Unified Development Code process.  Unlike the rest of the nation, PDs are the rule here, not the exception, and their overuse continues the erosion of the spirit and the philosophy of the UDC that has been persistently under way in recent years.

Back to SoFo: it would be an appropriate area for a zoning overlay district, especially considering its proximity to the civil rights museum and South Main.  During the development of the UDC, it was said that in lieu of a comprehensive plan for Memphis – something not done in more than 30 years and apparently still unthinkable as a priority today – overlay districts would be created for strategic neighborhoods.  Working with the residents and businesses for an area like Broad Avenue, planners collaborated with the development of special zoning that reflects the vision of the neighborhood and protects its character.

In fact, as part of the UDC process, a charrette was held for Broad Avenue before it was rejuvenated that was to be the basis for a special zoning overlay, but that has never taken place.  Contrary to expectations, there has not been a single zoning overlay district approved since passage of the UDC, adding to the list of the ways that the UDC has been betrayed by the very zoning officials expected to realize its potential for creating a more livable Memphis.

All in all, projects like the one in SoFo continue to shake public confidence in local government’s ability to call balls and strikes fairly, contributing to a declining faith that government is acting in the best of interest of the backbone of this city – its neighborhoods.

It’s encouraging that the Downtown Memphis Commission saw its responsibility as protecting the character of SoFo rather than joining city zoning officials as apologists for variances that do nothing so much as destroy the integrity of the Unified Development Code at the precise moment when Memphis needs its guidance and principles most.