When Motorola Mobility lined up a Silicon Valley candidate a few months ago for a VP-level role, the phone maker was hopeful he’d accept. After all, the company offered the chance to develop products at a subsidiary of Google Inc.

The engineer declined. His reason: the prospect of relocating to Libertyville, Ill., about 35 miles from downtown Chicago, said Scott Sullivan, Motorola’s head of human resources. 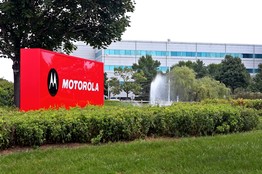 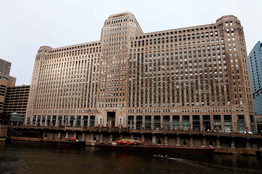 Mr. Sullivan expects recruiting to get a lot easier next February when the company moves into a new space in the storied Merchandise Mart building in downtown Chicago.

Motorola will join United Continental Holdings Inc., Hillshire Brands Co. —the successor to Sara Lee Corp.— and other corporate giants abandoning vast suburban campuses for urban offices nearer to the young, educated and hyper-connected workers who will lead their businesses into the digital age. Archer Daniels Midland Co. recently said it would move its headquarters from Decatur, Ill., and in the Bay Area, startups like Pinterest Inc. are departing Silicon Valley for San Francisco.

After decades of big businesses leaving the city for the suburbs, U.S. firms have begun a new era of corporate urbanism. Nearly 200 Fortune 500 companies are currently headquartered in the top 50 cities. Many others are staying put in the suburbs but opening high-profile satellite offices in nearby cities, sometimes aided by tax breaks and a recession that tempered downtown rents. And upstart companies are following suit, according to urban planners. The bottom line: companies are under pressure to establish an urban presence that projects an image of dynamism and innovation.

“The showcase headquarters of the past, the beautiful suburban campuses—that’s a very obsolete model now,” said Patrick Phillips, CEO of the Urban Land Institute, a land-use think tank.

Nationwide, commercial vacancy rates in central business districts have gone down faster than those in suburbs since the real-estate market began to recover in 2011, with 13.9% of urban space empty in the third quarter of 2013 versus 18.5% in the suburbs, according to research firm Reis Inc. At the end of 2010, the figures were 14.8% and 19.1%, respectively.

“There’s increasing evidence that this represents a broad trend among large and middle-size companies,” said Enrico Moretti, an economist at the University of California, Berkeley, and author of “The New Geography of Jobs.”

And highly educated workers are clustering in a small number of cities. In 2010, more than 43% of Americans with bachelor’s degrees chose to live in 20 metropolitan areas, primarily tech hubs such as Seattle, San Francisco and Raleigh, N.C., according to research from the Brookings Institution. And as younger graduates marry and start families later than previous generations—often with both spouses pursuing careers—they’re delaying moves to the suburbs, sometimes indefinitely.

For longtime employees, however, corporate moves to the city mean longer commutes and disrupted schedules and family life. And the corporate quest for youth and innovation can leave some workers feeling slightly unwelcome.

“We joked about the older suburbanites being excluded from the new [business] model,” said Jon Scherf, age 42, a marketing professional who left Hillshire shortly before its December 2012 move to downtown Chicago. “They would’ve been happy to have me but they’re also happy to bring in new blood.”

Companies say some attrition is normal. Motorola is offering full relocation packages for employees who choose to sell their suburban homes and move closer to the new office. Still, management expects 2% of its staff to depart and about 75% to stay after the relocation. The remainder, said Mr. Sullivan, will likely be “on the fence.”

The shift to urban headquarters favors cities such as Chicago, San Francisco and Boston, destinations of choice for recent college graduates, while aging cities like Cleveland and Detroit struggle with corporate flight and economic decline.

Even when headquarters stay put, more companies are opening or expanding urban satellite offices, especially for technology and research staff working on product development and innovation, according to Mr. Moretti.

Silicon Valley giant Yahoo Inc. signed a big lease this year to expand its San Francisco offices so it can recruit top engineers unwilling to make the long commute on Highway 101. And Coca-Cola Co. in June said it would open a 2,000-person information-technology office near its headquarters in downtown Atlanta, relocating some tech staff that had been based in the suburbs.

Overall demand for commercial real estate in the suburbs is strong in metro areas like Sacramento and Dallas, and in regions rebounding from the worst of the housing collapse, said Walter Page, director of research at real-estate data firm CoStar. However, almost no large firms have left cities for the suburbs recently, CoStar has found. 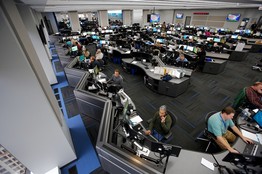 As United Airlines planned its 2010 merger with Continental Airlines, the company chose a neutral space for the two cultures to meld. That meant leaving the “bubble” of its immense campus in Elk Grove Village, a suburb about 20 miles from Chicago, said Kate Gebo, vice president of corporate real estate.

The carrier shifted a small group of employees to Chicago in 2007 and in 2009 announced that it would move all corporate operations downtown. It was an opportune moment; the real-estate market was sagging and landlords were slashing rents, and the city offered the company incentives worth up to $35 million over 10 years. About 4,600 United employees now work in 16 floors of the Willis Tower, formerly known as the Sears Tower.

The new downtown offices—decorated with murals and lights that mimic the shape of an airplanewing—have proved a magnet for M.B.A.s from top-tier schools as well as new staffers in digital advertising and social media. In the last two years, more than a third of all hires have been under the age of 30, said a spokeswoman. Before that, the figure was closer to 25%.

United has also revived its college internship program, which had been largely dormant for years because the commute from area colleges to Elk Grove Village was too arduous for those without a car.

The airline declined to detail the cost of its relocation or its current real-estate expenses, but Ms. Gebo said the alternative was an extensive upgrade of its old facility.

For Hillshire, which changed its name from Sara Lee after spinning off its European coffee and tea business in 2012, the move downtown was part of a total reorganization that included emulating the culture of a startup, and hiring a workforce to match.

The maker of Jimmy Dean sausage and Ball Park franks now calls itself an “innovative meat-centric company” and a “$4 billion startup.” The slimmed-down Hillshire—which now employs around 550 people at headquarters, down from 1,100 before the split—vacated its suburban campus in December 2012 for Chicago’s West Loop.

In the city, Hillshire is finding “the type of employees we wanted—externally focused and agile” with a ” ‘refuse to lose’ attitude,” said Mary Oleksiuk, Hillshire’s head of HR.

One of them, Ryan Rouse, age 33, directs the company’s innovation group. He owns a home in the West Loop and joined Hillshire in June from a marketing role at Newell Rubbermaid in Oak Brook, Ill. Now, instead of a car commute that could stretch to almost two hours, he’s got a 15-minute walk or a five-minute bike ride to the office. Dining options near the office have been a plus, he said, adding that “access to really wonderful food experiences” helps him think more creatively about possible Hillshire products.

For longtime employees, it has been a more complicated switch. Melissa Napier, treasurer and senior VP of investor relations at Hillshire, bought a house in Downers Grove in 2007 and lives there with her husband and two sons. While she now attends more social and networking events downtown, her commute, once a 10-minute drive, now gets her home at 7:30, an hour later than before.

The kids’ dinner-and-homework routine now falls to her husband, a consultant.

Mr. Scherf, who was a manager of shopper insights at Hillshire and now works at Pfizer Inc. ‘s Itasca, Ill. office, said the company’s move was “the tipping point” in his decision to leave, largely because he didn’t want to be beholden to train schedules. He also felt unnerved by layoffs and an accelerating “cycle of change.”

As young workers start families, they may care more about soccer fields and good schools than sushi restaurants and bike paths, priorities that may send them out of the urban core.

But the employers that sought them out in the city are unlikely to follow them back to the suburbs, said Mr. Phillips of the Urban Land Institute.

“Given energy prices and traffic conditions, it’ll be a long time before we see another wave of suburbanization.”

Write to Lauren Weber at lauren.weber@wsj.com