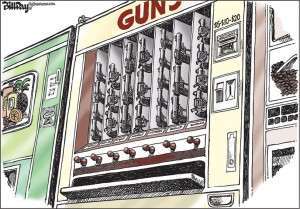 We guess when you have drifted as far away as Agricenter International has from its founding vision, it’s takes little effort to justify the almost monthly gun shows taking place there.

But the decision by Agricenter to defend the gun shows because they are revenue-producing was instructive.  More than anything, it summoned up the old punch line: “Now we know what you are.  We’re just haggling over the price.”  With its decisions to be a purveyor for these weapons, Agricenter International’s willingness to do anything for money becomes blindingly clear.

Hosting the gun shows at any time brings into question the decision-making of the board, but charging ahead with one in the wake of the Newtown murders shows a lack of sensitivity that is startling in its scope, made only worse by the weak justifications about contracts and legalities.

The series of gun shows at Agricenter have long been a questionable use of the facility, but it finally reached the tipping point following the murders of 20 young children and six adults at Sandy Hook Elementary School in Newtown, Connecticut.  In the wake of that horror, highly respected Memphians William and Margaret Craddock suggested cancellation of a gun show in a December 17 email to Agricenter president John Charles Wilson “in response to the recent shootings and the strong outcry of concern for accessibility and use of weaponry.”

Mr. Craddock wrote: “I cannot see how a gun show can be aligned with the spirit intended by your mission statement.”  By the way, the mission statement states that “Agricenter International is a self-sustaining, not-for-profit organization that provides economic development and improved quality of life by facilitating agricultural research, educational programs, environmental conservation, natural area preservation and recreational opportunities. “

Mr. Wilson said Agricenter had little choice but to honor the contract and that the gun shows help pay the bills at his facility.  “Agricenter is a company,” he said.  “We have to be self-sustaining.”

The Wrong Time and Place

Yes, Agricenter International had a contract for the gun show, but surely it has a cancellation clause and even if it calling off the gun show resulted in a penalty, it was worth it to show that people – whether they are gun owners or not – understand that there are times for mourning.   (There were people who said they were willing to pay any penalty.)

But the bigger question is whether these gun shows are an appropriate function for an organization dedicated to an expanded understanding of the importance of our agricultural assets.  Our region remains significantly above the average gun murder rate for major metros in the U.S. (see earlier post), and it only seems logical that a proliferation of guns naturally contributes to a proliferation of gun crimes.

What’s amazing to many of us that when there are farm shows at Agricenter International , the farm implements have more safety standards and regulations than the weapons sold at its gun shows.  Meanwhile, children between the ages of 5 and 14 are 13 times more likely to be murdered with a gun as children in other industrialized nations and the rate in Memphis is even higher.

As for the defense that Agricenter International is a “company,” if it is, it should move across Germantown Parkway and start paying taxes.   It’s worth remembering that Agricenter International is a nonprofit organization, it sits on 1,000 acres of public land, it exists because of more than $20 million in public funding, and it is housed in a building built and repaired by the public.  It pays no taxes, and if it has a string of 12 years without asking for money from county government, it is only because Shelby County cut off the spigot.

Even before county government ceased yearly funding, questions were being raised about Agricenter’s choices in events that had not the barest connection to agriculture or conservation.  Because of its nonprofit status and because it exists as a result of taxpayers, its decisions on what events to hold should be based on more than if it makes money for Agricenter.  More to the point, it should be whether it contributes to a positive quality of life in this community.

We’re a long way from those heady days when Agricenter International was opened with visions of research labs producing internationally important work, permanent displays of technologically advanced equipment for agriculture, and cutting edge seminars and symposiums about trends and breakthroughs.  To make it come to fruition, government put up significant funding on the bet that our region’s strong agricultural heritage could be a platform for launching an equally strong agricultural future.

In the end, it was not to be, and Agricenter International became within a few years a location for subsidized offices and it began a run of gun shows, home shows, flea markets, and boat shows.  In other words, the vision of creating a magnet and hub of new events gave way to Agricenter merely becoming a public facility that was often luring existing events from other public facilities or local hotels.

We can appreciate the challenge of funding Agricenter International’s $3.5 million yearly budget, but in its IRS reports, it says its purpose is “to promote educational/research endeavors for the advancement of agriculture.”  That’s a mission that all of us can stand for, but events like gun shows only devastate its brand, confuse the public, and erode support.

Highway 385 Suggests We Have Lost The War On Sprawl