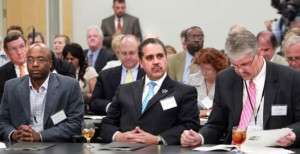 Anytime there’s a lag in political intrigue in Memphis and Shelby County, we can always depend on our school issues to produce some.

The whole thing has the feeling of an idea born from group think by some people who may be overthinking a clever solution to the superintendent issue, overreaching to address the concerns of the suburbs, and underappreciating the consequences of giving a white, suburban superintendent what appears to many to be preferential treatment.

It’s all a bit like the municipalities’ rush to judgment on their own school districts.  There are a lot of political machinations, but few facts on which the public can base a decision.  We’ve heard an awful lot about a unified district known for its educational excellence and the continuation of the innovative programs that have attracted national attention, but very little about how Mr. Aitken responds directly to those priorities.

It’s as if there’s a preconceived decision and that through political power, some people are determined to make it happen.  Our instinct is that the new unified district should start anew with its leadership and that the new superintendent does not reside in Memphis and Shelby County now.

Nothing has ever been as delicate as the process and decisions about the future of public education, but there is something even more important: the harmony and good will in this community.  That’s why we think the unified school board should create a level playing field and undertake a national search for the leader who can make the most out of this historic opportunity.

It’s not enough to measure the local superintendents on their popularity with their staffs or their past experience, because few superintendents in this country have led anything as complicated, nuanced, and volatile as the new unified district.  It seems clear to us that whoever is hired should have proven success in urban education, but even more, that person needs to know how to build coalitions, inspire confidence, maintain confidence by the Gates Foundation and others in the commitment to school reform, and act with flexibility and resilience.

We suspect the unified school board feels the pressure of putting someone in charge of the new district as soon as possible, but with one of the largest districts in the U.S. taking shape in Memphis, the potential exists for keeping both superintendents in leadership positions while the best person in the country is identified to run the new unified district.

The odds that the exact person for this job just happens to be running Shelby County Schools seem a long shot although the new school district would do well to find a position for him.  In fact, we could say the same thing about Dr. Cash.

The members of the unified school board would do well to listen to the words of concern by their colleague Martavius Jones.  He said there has been a plan to usher Dr. Cash out the door since at least January, and if there is to be a vote about Dr. Cash’s future with the unified district, there should also be an open vote about Dr. Aitken’s future as well.

Mr. Jones asks a cogent question about why votes on Dr. Cash’s future are given to members of the county school board since their ballots are based more on the future of the municipal districts than the unified one.   More to the point, to name Mr. Aitken as superintendent is to reward the game-playing by the Shelby County School Board when it extended his contract to give him the upper hand in the appointment of the unified superintendent.

Running for the Wrong Job

The unified board and the Transition Committee have served in exemplary fashion, and the former should continue its good work with a display of utter transparency in which the votes are cast for both candidates and the public is able to weigh them for good or ill.  They should listen closely to Mr. Jones because his warning forewarns the blowback that any vote about Dr. Cash while Dr. Aitken doesn’t abide by the same rules will be received as an outrage by a significant portion of the public whose confidence is needed as the new district launches.

Meanwhile, out in the hinterlands, Mr. Pickler is campaigning to be the Germantown member of the new board for the unified district.  It’s a curious thing to witness since his words on the stump indicate that he has no intention of abiding by his oath of office if he is elected.

To listen to him, it would seem that he’s running for the board of the Germantown municipal school district.  He spends his time talking about how he’s going to serve the municipal district’s agenda although his oath of office is taken to serve the interests of the unified district.

Apparently, he’s counting on the amnesia of Germantown voters, because no one deserves the title of “father of school merger” more than he does.  It was his clumsy, tone deaf efforts to make Shelby County Schools into a special school district that triggered the vote in Memphis to give up its school district in the first place.

He continues his characteristic sleight of hand by suggesting that he’s much more committed to the municipal districts than his opponent Kim Wirth.  He calls her a “fine lady” and immediately attempts a campaign that mangles the facts as is his custom.

Mr. Pickler suggests that Mrs. Wirth’s work on the Memphis City Schools Foundation and with the Gates Foundation on school reform programs in the city district are two strikes against her.  And yet, the truth is that she was raising money to improve Memphis City Schools and the money she raised meant that the funding didn’t have to come from property taxes paid by people throughout Shelby County, including Germantown.  The fact that she has children in the county system and she has experience in school improvement with a program created by former U.S. Senator Bill Frist are just as easily dismissed by Mr. Pickler.

It all makes many wonder why people in the towns even have the opportunity to vote for members of the unified school board since they are ordained to set up their own separate but equal districts.  It also makes us wonder whether, if elected, Mr. Pickler can be recalled for violating his oath of office.