As I drove into my parking spot at the surface parking lot adjacent to the Marriott in Tucson for the Arizona Historic Preservation Conference last week, I noticed a slew of ethnic restaurants across from me. Right off the bat I saw an Afghani restaurant (Sultan Palace) next to a Vietnamese restaurant (Saigon Pho). And from their signange I could tell they weren’t very fancy, and were more over-the counter sort of places. I was absolutely delighted and started devising ways to hit both spots in the short two days I was in Tucson.

But seeing these various fast, simple ethnic restaurants in Tucson, granted it was in the university area, made me think of how we DON’T have any such thing in Downtown Phoenix, which is, supposedly, a student area as well. 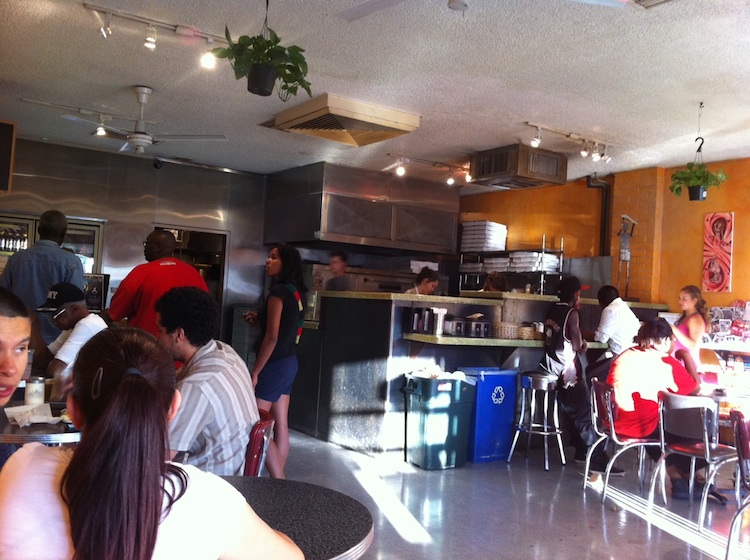 Brooklyn Pizza Company in Tucson on a Thursday night. Photo by the author.

So here are 10 reasons why I think these kinds of restaurants are key to making Downtown Phoenix more vibrant:

1. They are relatively inexpensive and therefore attract lots more people than fancier restaurants.

2. The food is usually very good (but without the prices of fancier restaurants)

3. They are great lunch options for people who are in a hurry, on the work clock, between classes, or attending a conference.

4. They are also great dinner options for people who want to have an inexpensive but fun dinner, and then spend their time and money doing after-dinner activities such as going to a live show, watch a movie, go dancing or go bar hopping.

5. Their speed and affordability attracts a diverse population in terms of age. Lots of young people, like college students, are often mixed in with older professional adults at these kinds of restaurants.

6. The ethnic factor attracts lots of ethnically diverse people. For example, at Sultan Palace in Tucson, where I lunched at with John Jacqumart and Donna Reiner, we saw a bunch of Middle Eastern and Indian Subcontinental people dining there as well as lots of white Americans. It was a veritable ethnic smorgasbord! Same goes for Saigon Pho which I went to the next day, except I saw more Aisan people in the mix.

7. Fast, simple ethnic restaurants are a GREAT alternative to fast-food joints for people like me who eat out A LOT.

8. These places are usually bustling with activity, as they turn people around fast, are affordable and thus attract a consistent crowd. A great example of this is Brooklyn Pizza Company in Tucson, which is a fantastic, inexpensive, order-at-the-counter spot in Tuscon. It’s quickly becoming an institution, and is constantly crowded, busy and active.

9. Having fast, simple ethnic restaurants in Downtown Phoenix, that are open late, would be KEY to making Downtown a more vibrant, livable and active place. We have enough fancy, sit-down, (usually pricey) places. And then we have foodtrucks, which I love too. But we also need an in-between layer of options for people, with more permanency than food trucks and less slow and expensive than sit-down restaurants.

10. Fast, simple ethnic restaurants are great starter places for people who are apprehensive of trying ethnic food. The sit-down versions of ethnic restaurants often intimidate people unfamiliar with different ethnic cuisine. An example of this phenomenon is Zaytoon Kabob Bistro on 16th Street, north of Highland. My Wisconsin-bred husband Paul who normally avoids different ethnic foods LOVES this place because of their accessible format of ordering over the counter and their use of lots of photos to show what their dishes look like. Plus, they have “Americanized” options of Persian food, like kabob wraps mixed in with authentic Persian dishes like Dee-Zee.

On a last note, I still mourn the loss of Verde in Downtown as it was the only fast, simple, ethnic restaurant in the area, a place Paul and I frequented with great zeal, but alas, a place that didn’t make it…

Getting Real About Downtown

City-County Merger: Nothing To Fear But Fear Itself