To the list of those dinged by states’ budgetary woes—from Illinois vendors to Wisconsin public employees—add YUSA Corp., an auto-parts supplier in the city of Washington Court House, Ohio.

This was one of nearly a dozen “clawback” orders signed in two months under the state’s new Republican governor, John Kasich. There will be more, says his job-creation director, Mark Kvamme: “We need every single dollar we can get our hands on.”

YUSA’s view: “Give me a break,” says Chris Fairchild, the auto-parts firm’s controller. “For crying out loud, we’re doing our darnedest. While other local businesses have gone bankrupt or gone to Mexico or other states, we’re right here. You’d think there would be a little respect for that.”

The budget vise squeezing states and cities is changing the economic-development game. Governments are attaching more strings to their offers of tax breaks, cheap rents and bond deals designed to lure business, and are getting tougher on past recipients who didn’t come through.

Officials fret that taxpayers will look askance on any giveaways to business that don’t yield a clear benefit, at a time when governments are paring services to save money. “We want to challenge this stuff before the public does. The political environment now is that you have to,” says John Garcia, director of economic development in Albuquerque, N.M. 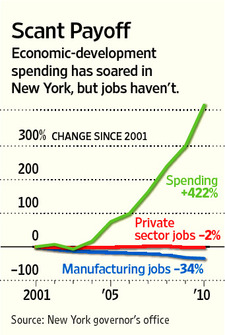 His city, facing a potential budget gap of $35 million or more in the coming year, is taking steps to retrieve $492,399 in past property-tax abatements given to lure a call center, which closed in August and eliminated 670 jobs it had created. “In the past, we might negotiate that out, but now we’re not real quick to want to negotiate anything. We’re hurting pretty bad here,” Mr. Garcia says.

State and local governments collectively give more than $70 billion a year of incentives to lure business and jobs, primarily through tax breaks, says Kenneth Thomas, an associate professor of political science at the University of Missouri-St. Louis.

Economists have long debated the wisdom of such incentives. Supporters say they help states build diverse local economies and boost employment, ultimately generating more tax revenue than they cost. Detractors say perks sometimes go to businesses that would have come anyway, and in other cases just enable companies to play one region against another for a sweeter deal.

The issue has started to attract limited-government activists, who decry the perks as waste and government overreach. On Wednesday, a tea-party group gathered at the South Carolina Statehouse in support of a Republican-sponsored bill calling for disclosure of how much economic sweeteners cost taxpayers.

“It’s the wrong time for these deals; we really don’t have a lot of money in the state,” said Talbert Black, Jr., state coordinator for the Campaign for Liberty, a tea-party group. “But even in a good time, it’s still not right to have the state deciding who gets to pay taxes and who doesn’t,” he said. “It messes up our free market if the government gets to pick who the winners and losers are.”

One downside of the arrangements from the standpoint of businesses, which need to be able to adjust output to demand, is the inflexibility of being locked into a jobs commitment. Many companies weathered the financial crisis by cutting jobs, not creating them. So even as states take a harder line on incentives, amid budget strain, the same weak economy drives companies to press for every possible concession.

“Companies are being forced by shareholders to play the incentive game to get the best deal possible,” says Brent Pollina, vice president of Pollina Corporate Real Estate Inc., a site-selection firm that represents businesses planning moves. Ever since the recession struck, he says, “companies are trying to get as much up-front as possible from communities.”

A U.S. division of Fraunhofer-Gesellschaft, a German research and development company, regards development subsidies as highly important because, just like public officials, “we are also facing more uncertainty, and are more hesitant to start something new,” says Christian Hoepfner, director of technical operations for the firm’s American division.

The division received $750,000 in incentives from public officials in New Mexico for a new facility that opens soon. But it had sought more than twice that amount, and the plan took a long series of meetings in New Mexico to negotiate. “In the past, people were more ready to go: ‘Hey, great idea….Let’s pass right through the system and get it done.’ Now it’s clearly more difficult to close even a sound plan,” Mr. Hoepfner says.

The city of Albuquerque canceled plans to contribute to the package. “Truthfully, we got a little queasy, and we pulled out,” says the city’s Mr. Garcia. “We’re more cautious now.”

Even under budgetary strain, states aren’t going to cease economic-development spending, because of their need for jobs. Indeed, a few, far from souring on sweeteners, are expanding their job-quest programs.

Virginia raised its spending on economic-incentive deals 56% last year, while making budget reductions elsewhere. The administration of Republican Gov. Robert McDonnell says job creation is the best way to raise tax revenue and pay for services. The state’s unemployment rate has been declining and was 6.3% in March.

And Wyoming has adopted legislation permitting the state next year to buy as much as $600 million, up from $100 million, of industrial-development bonds, which are securities that local governments issue to help businesses borrow for capital projects.

The sponsor of the bill, State Sen. Marty Martin, says he was responding to situations where businesses wanted to do projects in Wyoming but had trouble getting loans. “The large banks, they are just not putting out money to work with businesses,” says Mr. Martin, a Democrat.

The legislation, however, requires that bond purchases be approved by the state treasurer, and that official opposes the new policy. “I take the position that if a bank will not loan money to a business, in very rare circumstances should the state of Wyoming do that,” says Treasurer Joseph Meyer, a Republican.

He has a dim view, in general, of giving businesses incentives to come in. “They take our money, stay for a couple of years, and then move to another state,” Mr. Meyer says.

In New York, another state facing tight finances, new governor Andrew Cuomo complained in his budget message that economic-development spending had soared, while not doing enough to create jobs. Such spending totaled about $1.55 billion in the fiscal year ended in March, more than triple the level a decade earlier, a time during which the number of manufacturing jobs in the state declined by more than a third, according to the budget briefing. Mr. Cuomo, a Democrat, called for changes including better oversight of the deals.

In some cases, public officials have grabbed ownership stakes in companies that lagged in producing jobs.

Alabama’s public-employee pension system lent more than $550 million in 2007 and last year to finance construction of a rail-car plant, part of a strategy by the fund to spur development in the state and generate tax revenue. But the recession curbed demand for rail cars, and by last summer the plant was idle, says the pension director, David Bronner.

Fearing it would lose its investment, the pension system took ownership of the mile-long plant and is trying to lease it to others. The plant’s original owner, National Industries Inc. of Hamilton, Ontario, declined to comment.

Massachusetts revoked tax breaks or other economic-development perks for 74 companies in 2010 for failing to create the promised jobs. That compares with 18 such revocations in 2007, before the financial crisis hit.

Most companies that fall short argue, “Gee, the economy is so bad, did you really expect me to add jobs in this economy?” says Gregory Bialecki, the state’s secretary of housing and economic development.

In the past, Massachusetts might have considered whether a company made a good-faith effort, he says, but “the economy has changed things. It’s much clearer now; if you don’t create the jobs, we expect our money back.”

Getting it can be difficult. Massachusetts officials believe they may be legally able to salvage only about $3 million of $21 million in grants given four years ago to Evergreen Solar Inc. The company was supposed to create 350 jobs at a plant near Boston and maintain them for eight years, but it is now closing the plant after just three years.

“Changes in the competitive environment caught everyone off guard” after subsidized Chinese production forced down prices, says a company spokesman, Michael McCarthy. He says Evergreen is cooperating with officials to determine how much it must repay but believes it fulfilled most of the agreement because at its peak the plant employed around 800.

Massachusetts legislators now are considering a bill that would stiffen development contracts. One provision would require companies that don’t meet commitments within two years to pay back the value of the tax break.

Officials in Henry County, Va., regret they didn’t strike a tougher deal with American of Martinsville, a maker of sofas and recliners.

The business got a $280,000 state grant in 2009 for an expansion of its local plant, which was supposed to include retaining 121 jobs and adding 94 more within three years. The firm would be considered in default if it filed for bankruptcy during that time or didn’t create 75% of the jobs.

The jobs came; by April 2010, the facility had 200 employees. But they didn’t stay. That month, the plant abruptly closed.

Trying to protect its investment, Henry County put liens on the sofas and loungers still on the premises, but the furniture maker filed for bankruptcy reorganization in June. The court ruled the county an unsecured creditor and it never was repaid, says county administrator Benny Summerlin. “Now we’re stuck,” he says. Unemployment in Martinsville was 17.8% as of February.

The furniture company is owned by a private-equity firm, Hancock Park Associates. It declined to comment.

Going after companies that built a plant but then saw the economy turn against them can fray a state’s welcome mat. Mr. Fairchild of YUSA, the auto-parts company Ohio is dunning for part of a past grant, says, “Frankly, you wonder whether…they are trying to chase industry clean out of here, and beat us with a stick until we finally say, ‘The heck with you.'”

Asked about that, Ohio’s job-creation director, Mr. Kvamme, says the state “will continue to be pro-business [but] when companies receive tax dollars with the promise that they will create jobs, we must hold them accountable for the sake of our tax-paying businesses and citizens.”

He adds that the state is simply upholding to the same standards as others in the business world: “What does their bank say if they don’t make a payment? What does their mortgage company say?”

10 Things We Love About Memphis: From EcoMemphis

Building an Election System that Works