Burying Jim Crow Once and For All 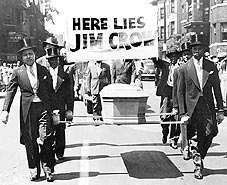 We’ve been thinking about this a lot as a result of our give and take yesterday with our friend, albeit adversary on this issue, Ken Hoover, when he suggested that we are off-base in saying that the current debate about unifying our dual school systems is a modern separate but equal issue.

It’s hard for us to think otherwise.  If the history of the South tells us anything, it is that Caucasians always find ways to perpetuate their views of the world to stay in power, often by changing the rules of the game any time African-Americans figure out how to play it.

It’s really not too surprising.  After all, Shelby County Schools was under a federal court desegregation order for 41 years, ending only with a grudging ruling by a federal judge three years ago to grant unitary standing.  “The Court has a duty to independently evaluate the progress of Shelby County schools in achieving compliance with the court’s order to fully remove all vestiges of de jure segregation,” U.S District Judge Bernice Donald ruled.  “At this point, Shelby County school district does not merit a passing grade.”

Judge Donald declared unitary status as to the issues of staff, transportation, and facilities but denied it on issues of extra-curricular activities, student assignment, and faculty integration, instructing Shelby County Schools to immediately bring the district into full compliance “with its constitutional obligations.”

And yet, some people suggest that somehow Memphians generally and the Memphis City Schools Board of Commissioners specifically are being illogical and imprudent when they don’t automatically believe county school officials when they say they have the best interests of Memphis students at heart as well as their own….although they have previously tired to change the rules to subvert the previous binding agreement that froze school boundaries (with Memphis City School boundaries being co-terminus with City of Memphis), to change taxing authority, and to change the budgetary process in search of a legislative rubber stamp.

At the same time, today, we hear some of these suburban leaders question why Memphis would even think of discarding a 150-year-old school charter which has served Memphians well.  Of course, it was this charter that set up dual segregated school systems that denied African-Americans quality education for more than a century.  But never mind.

Following the Civil War, and as late as the 1950s, Tennessee – a slave state – was enacting a series of statutes legalizing racial segregation in many parts of community and social life, including marriage, cohabitation, different modes of transportation, and public accommodation.  Locally, Shelby County Government played a key role in sweeping away the Brownlow government reforms and returning as quickly as possible to business as usual, which unfortunately, included steadfast segregation and the lynching of three black businessmen eight years before the dawning of the 20th century.  Fortunately, legendary civil rights figure Ida Wells was out of town or she too would have been lynched, but unable to return home, she found a bigger megaphone through the newspapers of the North.

All of this latent racism is laced with irony since it was an African-American, Robert Church Jr., who bought the first bonds that allowed Memphis to re-incorporate following the Yellow Fever epidemic of 1878.  In other words, not only did an African-American again breathe life into Memphis as an incorporated city, but he did it after being left for dead during the Memphis race riots of 1866.

Tennessee worked hard to keep African-Americans from being educated, even to the point of amending the constitution to require separate black and white school systems.  Laws supporting separate but equal schools continued into the middle of the 20th century and inspired the “citizenship schools” where leaders of the civil right movement were educated in 1960.

Fighting to the End

Proving that old habits die hard, the integrated Highlander Folk School in Monteagle was fire bombed and in 1960, state officials tried to padlock its doors.  Yes, you’re right – this was six years after Brown versus Board of Education.

We mention all this not so much to give a history lesson, but to underscore how disingenuous it is to treat black Memphians as unjustified in their suspicions and mistrust.  With the history of their race, it should be nothing short of in their DNA.

That said, Memphis City School, unlike Shelby County Schools, deserves plaudits for its efforts to end desegregation in the late 1960’s.  It took awhile to attain unitary status, complicated by the exodus of white kids.  The percentage of white children enrolled in private schools rose from 12 to 30 percentage by 1973.  (Despite some conventional wisdom to the contrary, Memphis City Schools has not bussed students for racial desegregation for many years.)

Temptation in the Desert

It was in this kind of rural-oriented atmosphere that county schools became accustomed to getting whatever they wanted, because in those days, the majority of the county squires only cared about county schools and public services outside Memphis.

It’s not like you have to ancient to remember the machinations to resist equal rights for African-American  Memphians, so it’s no wonder so many people in Memphis demand more than lip service before they believe that anyone is looking out for their interests.  Time after time, history has shown that white power brokers will do whatever they can to change the rules and stay in charge, and it is that history that is being overlaid on the present controversy.

It is this history that when we see some black Baptist ministers from Memphis see their allies as the county separatists.  This week, a handful of them met with Shelby County Schools Superintendent David Pickler in an alleged effort to get the facts.

It summoned up images for us of Jesus’s temptation by Satan for 40 days and nights in the desert, but time after time, He resisted and eventually shunned Satan’s seductions and was fed by angels.  There are similar temptations of Buddha and a god in ancient Egypt, but then again, there weren’t any Baptist preachers there so we’ll set that aside for now.

The Side of Angels

We don’t want anyone to believe that we think Mr. Pickler is Satan, but only that the ministers should take heed to the lessons from this allegory or historical event (depending on your theological leanings) in the life of Christ.  Following the temptation, Jesus found himself on the side of the angels and found his life’s work among his people.

Before launching into a campaign to support the separatist tendencies of Shelby County Schools, we hope the ministers will ask themselves where they logically should place their trust and faith.

We suggest that it is with their own people who put the future of their children and a unified community ahead of political power and their narrow self-interest.  We suggest that it is with the “least of these” where the ministers will find the righteous road rather than with the people heading up systems with strong reminders of our Jim Crow past .

That’s when you know you’re on the side of the angels.