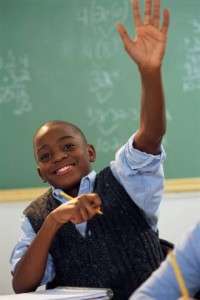 If urban school districts like ours had a dollar every time somebody said, “Children are our future,” they’d never have a funding problem.

Unfortunately for these districts, Americans are long on platitudes and short on support.

That said, we begin with the obvious: children are our future.

Or more precisely, well-educated African-American students will in fact determine our future – whether Memphis is on the front of the knowledge economy wave or stuck in its back wash.

That’s because, as most of you know from our incessant references to it, we are unlike the other 50 largest metros in the U.S. because of our bulge in children under 18. Next time you wonder why Nashville has so much money for parks, libraries, and public realm, just remember that percentagewise, Nashville has 25% fewer children than we do. That’s a $200 million swing in mandated public spending for our community on schools alone.

The bulge of these young people is the good news, because while the rest of America’s cities are grappling with workforce problems, we have the next generation of workers already here.

The bad news is that we are in the bottom rungs in percentage of our population over 25 that is college-educated, and if you want to know if a city is going to be competitive in the knowledge economy, that’s the only number you need to look at.

While it’s tempting to define this issue in terms of lost opportunities for young people, with images of how multi-generational poverty in shameful environments remains a birthright for too many of us, let’s just define it in terms of our own enlightened self-interest.

Here it is: If we can move our metro from where it is today to just the median for the largest 50 metros, it would create $3 billion in economic wealth – more money in our cash registers, more tax money for our public services, and more ticket buyers for sports and arts.

In other words, rather than chase companies and sell our city at a discount by giving away taxes to make them love us, our economic development agenda for Memphis should be one thing – getting more students to high school graduation and into the line receiving a college diplomas.

Of course, there’s no question that things in Memphis are always complicated by emotion and reality because of the overlay of race. Just think: anytime Memphis wants to really identify a serious problem, it puts African-American on it: black neighborhood blight is worse than neighborhood blight, black crime is worse than crime, black workforce, black elected officials, and black school system.

Here’s the thing: we’ll be the first African-American majority metro – not city, metro – of more than one million people in history, and if we want to preordain our own failure, we will allow our institutions to treat our demographics as a problem.

In a world where talent is the key to whether a city succeeds or fails, why shouldn’t we set our goal of being the center for 25-34 year-old African-American, college-educated talent?

And above all, that should be the goal of our schools, because in the end, Memphis City Schools is in the talent business.

It all begins there. Although all the school districts in our metro are important, we rise or fall based on Memphis City Schools, and routinely, its students are victims of the most insidious racism of all – low expectations.   It’s the same low expectations and insidious racism that result in some African-American politicians calling for consolidation of schools, as if to say our majority African-American school district can only progress if it consolidates with a majority white school district.

Because of race, our city is lethargic in its push to demand the best urban district in the nation, and because of race, our region essentially assumes that there will only be a handful of students in Memphis City Schools who will excel and that we can’t do anything to help the tens of thousands who don’t.

The Facts And Just The Facts

There is no substantial difference between white and black students in whether their parents attend parent-teacher conferences or school meetings.

Three out of four African-American children are read to by their parents when they are young.

African-American 12th-graders are more likely than whites to have perfect attendance.

A poll of African-American youths 11 to 17 found that their biggest hope is to go to college, valuing academic success just as much as white students.  A poll of parents with children in Memphis City Schools found that they want the district to prepare their kids for college, not for jobs.

There are more and more of these kinds of statistics, and the fact that we are reciting them is testament to the relationship between race and education and our ignorance about our own history. After all, the history of the U.S. tells us that African-Americans learned to read even though the law forbid it, set up their own colleges when they were prohibited from attending white schools, established “freedom schools” in Mississippi to make sure “separate but equal” did not block opportunities of their children.

What do these statistics mean?

Some are the result of the hopelessness that surfaces whenever we talk about Memphis City Schools, some is the connection between poor teaching and poor student achievement, some is the lack of challenging curriculum and innovative use of technology, some is poor teachers being sent to the poorest schools, and some is teaching to the test, and some is the prejudice that African-American students need remedial classes more than accelerated classes.

In other words, it shouldn’t be surprising that students perform poorly when everything about their lives tells them that they are not as smart as white kids, that their schools are not as good as other schools, that the assumption from the outset is that they will not succeed and that their own city places no value on them.

That’s where we start…in every classroom and with every teacher.

In the end, there are no magic answers. There is only the magic that comes from the kinds of teachers that make a difference and do more than teach. They do in fact turn lives around. Most of us can point to the impact of such a teacher in our lives, and we need to make sure that the current students in Memphis City Schools do the same.

That’s the most exciting thing about the Gates Foundation $90 million to Memphis City Schools: it has an unrelenting focus on getting a highly qualified teacher in every classroom in our city.   That’s a right every child has, and it should no longer be a game of educational Russian roulette.