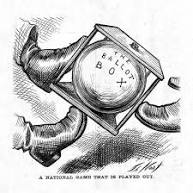 There hasn’t been a group of white politicians working this hard to keep a majority black constituency from voting since the days of the poll tax.

Now that we think of it, we wish we hadn’t even mentioned the poll tax, such is the willingness of far right Republicans like Tennessee Lieutenant Governor Ron Ramsey to do the unthinkable.  He’s tapped strongly in the Tea Party mentality that has a proclivity for rewriting history, so he probably thinks the poll tax wasn’t such a bad thing anyway.

Mr. Ramsey – aided and abetted by the zealotry of Majority Leader Mark Norris and Senator Brian Kelsey  – are managing to turn a school issue – the future of Memphis City Schools – into a civil rights issue for African-Americans and an issue of self-determination for every Memphian.  The narrow pandering of these Republicans is aimed at a distinctly anti-Memphis politics and is widely rejected by the more moderate Republicanism found inside the city limits.

Rumblings from the Capitol are that the proposed Norris and Kelsey legislation to tamper with the rights of self-determination of Memphians – both black and white – will be fast-tracked and will be law within days.  It will be the first time that the Tennessee Legislature has interfered in this type of local school issue, including when all the other major metro counties in Tennessee merged their city and county school districts.

As veteran television reporter Les Smith pointed out, Mr. Ramsey’s threatened intervention feels personal and political, fueled by his sad showing in Memphis when he was trying to become the Republican candidate for governor.  His recent saber-rattling shows how right Memphians were in the cold shoulder he received here in all but the most far right true believers of our community.

Mr. Ramsey said that he thinks “the referendum is very premature,” not withstanding that it is not state government’s job or authority to decide what referenda that Memphians put on the ballot.

City Schools Board Commissioner Martavius Jones nailed it in his recent reaction to Mr. Ramsey’s plan to block a Memphis vote: it makes as much sense for the mayor of Little Rock to demand a voice in the school merger decision than a politician from Blountville.  It’s not as if his constituency in Johnson and Sullivan Counties doesn’t have problems of their own that he should be tending to – young people with no futures, unimpressive jobs growth, and crimes that seem out of character for the small-town environment that he loves to tout.

Actually, his district is closer to Canada than to Memphis, so maybe we can forgive him for only now discovering our city.  During his gubernatorial campaign, his visits here seemed more like scolds from someone with only a passing understanding of our problems.  He was of course popular with the anti-Memphis set, those who build their political futures on their willingness to divide us as a people and seem willing to sacrifice any civic cohesion and unity for their own political ambitions.

Here’s the thing: the schools in Mr. Ramsey’s political district aren’t exactly setting the world on fire.  Perhaps, a school district that has attracted the interest of the Gates Foundation’s Teacher Effectiveness Initiative, The New Teacher Project, Teach for America, and New Leaders for New Schools should offer to help his schools out, since it’s Memphis City Schools that’s ground zero for school reform and innovation in Tennessee, not Sullivan County schools.

Not stopping at preventing Memphians from their constitutionally–protected right to vote in their home rule city, Mr. Ramsey thinks the State of Tennessee should also take over Memphis City Schools.  So much for Mr. Ramsey’s small government rhetoric.

But, more to the point, there’s no legal basis for the state to take over city schools.  Tennessee law – specifically the Tennessee Accountability for School Systems – sets up a six-step process before any district even has the possibility of being taken over by the state Department of Education.

Memphis City Schools is at Step One.  Before the state could do what Mr. Ramsey suggests, it would need to be at Step Six, which at its earliest would be four years from now if the district shows no improvement.  At that point, the law allows for the Tennessee Commissioner of Education to “assume any and all powers of governance” for Memphis City Schools.

Collierville Mayor Stan Joyner told Shelby County Schools said his city may form its own district to “protect our schools.”  These days, the language is always polite, but it rings reminiscent to the days when Jim Crow ruled our society.

Mr. Joyner is proud that Collierville schools have received high state grades in recent years, and we’re perplexed about why he thinks that will change.  It’s just so hard to get the obstructionists and isolationists from understanding that they are in a “community” where it would be refreshing if once in awhile, these town mayors talked about the common good instead of their own selfish interests.

After all, all of us county taxpayers carried the towns for years and subsidized their low property rates, but if we’re expecting any gratitude, we should think again although more than 70 percent of the residents commute to the jobs center of our region, Memphis.

All that said, we hope that all these towns do create their own school districts, because it will raise their taxes considerably and come closer to leveling the playing field so that taxes between Memphis and these bedroom communities are more comparable.

It would be helpful if these town mayors got a map of the Memphis annexation reserve areas, because there will be a time when if nothing changes, Shelby County Schools will have shrunk to the towns themselves.  The rest of Shelby County – except for an area around Shelby Forest and the northeast corner – will become part of Memphis.

That is the result of a legal agreement between Memphis and the towns, and as much as the suburban politicians would like, it’s not as simple as passing a law in Nashville.  There will be court challenges enough for whatever law is passed by Senators Norris and Kelsey, because a 14th Amendment lawsuit is imminent, and for politicians that seem unconcerned about consequences of their actions, this one will result in a national embarrassment for our community and our state.

Coordinated Economic Development Is Music To Our Ears