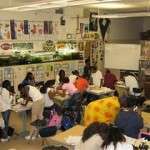 To wrap up what ended up as a week posting about education, we reprise a post from November 11, 2009:

It’s nothing short of hypocritical for us to wring our hands over the D’s and F’s given to Memphis City Schools students in the Tennessee Department of Education report card.

After all, that’s exactly what we as a city preordained for them.

Opportunities to break the cycle of multi-generational poverty that grips them are D’s and F’s. Day care and early childhood for them largely get D’s and F’s. The social network that teaches job skills to middle class kids and connects them to employment earns D’s and F’s.

And yet, in the midst of this D and F world, Memphis City School students are supposed to earn A’s and B’s like the middle-class kids in the suburban school district.

It’s the parochial residue from the puritanical work ethic: they should simply pull themselves up by their bootstraps. And yet, these are people without boots, much less the energy to pull them up.

It’s the same sort of policy by bromide that fuels the mantra of higher standards as if standards alone will give these students better opportunities and choices for the future. More to the point, the ability of Memphis’ students to achieve these higher standards won’t result only from more qualified teachers in the classroom. They will be achieved only when all the other D’s and F’s in these students’ lives are equally addressed.

The good news is that change is in the wind. Finally, after more than two decades of pretending like the poverty in our midst could simply be ignored, there is a growing understanding of its cancerous impact and growing interest in getting deadly serious about attacking it with the full force of our governments and civic organizations.

Its target is what Robert Lipscomb, Memphis director of housing and community development, called the “geography of poverty” in a meeting yesterday at Leadership Academy. As he pointed out, it’s no mystery to any of us where the problems are, and because of the concentrated nature of the poverty there, the “city of choice” concept is merely vaporous rhetoric.

There, choices are cut off. There is a greater likelihood of a future in the justice system that in a system of higher education. There is little choice for entering the economic mainstream, because there aren’t the paths to self-sufficiency that exist in neighborhoods with higher incomes.

There is a lesson learned by these young people that is more powerful than anything they ever learn in a city classroom. It’s that everything in their world teaches them that the city in which they live places little value in them.

Reasons for optimism center on Memphis’ “City of Choice” agenda praised by the Brookings Institution in a report early this year. It’s a new, strategic way of looking at public policies and public investments – with an eye of creating choices for every one in our city. It’s about giving talented people choices for the future, poor people choices for better jobs and middle class families choices for staying in Memphis. It’s about using the federal stimulus funding with the end in mind and leveraging local government funds to propel real change.

But first and foremost, it’s about the geography of poverty and the no man’s land that traps more people in poverty in Memphis than the entire population of Chattanooga.

It’s a city within a city. And as it always is, when the national economy sneezes, poor people catch pneumonia.

That’s why in the city within a city, it’s almost impossible to find a family that isn’t on welfare. There are 50,000 vacant houses, and the density of the neighborhood is half of what it was 30 years ago, making public services more difficult to deliver and more difficult to have impact.

In the city within the city, neighborhoods have so little value that Shelby County Board of Commissioners will turn over 140 lots to a builder to construct even more homes that earn D’s and F’s.

In the city within the city, more than half the families live on less than $8,700 a year. Children there almost have no friends who weren’t born out of wedlock and whose mothers aren’t single. Incredibly, the mean age of death in some poverty-stricken zip codes is less than 60 years of age.

Here’s the thing: we were appalled by conditions of the dogs at the city animal shelter, and we could have easily joined the people who held vigil there. But we think there are reasons to hold vigils on the other days of the years when it’s not animals, but people, who are being emotionally starved and educationally malnourished.

We wonder why we never see the picketers in front of Planned Parenthood walking in front of City Hall demanding better chances for every child once they’re born.

There’s little argument here that it was time for a vigil at the animal center, but we’re past time for vigils demanding action to change the lives of the 151,000 people held captive in the geography of poverty in Memphis.

As former Indianapolis Mayor Steven Goldsmith said: “It’s not just that poverty is morally inappropriate. It’s also economically dangerous.” That’s why it’s in the best interest of everybody in the region that we not only get serious about fighting poverty but that we become the national model for it.

A (Verbal) Shoot-Out at the AgriCenter Gun Show