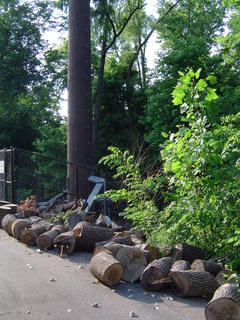 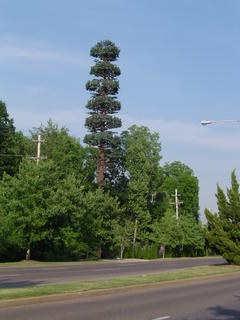 It’s a battle of goliaths: Can you hear me now vs. Not in my backyard.

More than 500 cell tower disputes have already ended up in court across the U.S. and as the towers become as ubiquitous as the phones themselves, look for the number to climb, especially now that they are showing up in parks and on church property.

Some cities, worried that towers reduce property values, oppose new towers within their borders. They have been surprised to learn that federal law allows cell phone companies to set aside local zoning decisions if those decisions would prevent seamless cell phone service. Also, the Federal Communications Commission says that cities can’t cite health hazards as grounds for lawsuits.

Public outcries have given rise to mutated 150 foot tall fir trees and cacti and giant flagpoles. To those who prefer form to follow function, the disguises only make them more visually intrusive. Apparently cell towers like the mammoth fir in East Memphis are supposed to show environmental sensitivity. The argument would be more convincing if the base of the cell tower wasn’t full of trees felled for it. (We didn’t even know Rusty Hyneman was involved in cell towers.)

With 171 million cell phones already in the hands of Americans today – 58 percent of the public – technology marches on. So will more and more lawsuits, conjuring up images of people in their cars on their cell phones calling their lawyers to complain about cell phone towers.

Any Ideas to Save the Direct Flight to Amsterdam?