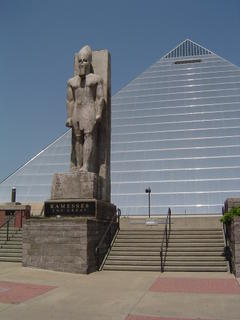 The Rameses statue standing in front of The Pyramid is an exact copy of one found broken, lying in the sands, at the site of the dead Egyptian city of Memphis. The committee studying future uses for the Memphis icon hopes its presence is not prophetic.

There are days when the most appropriate statue these days would be of Yogi Berra, because proposals for development of The Pyramid conjure up his immortal words: “it’s déjà vu all over again.”

Like previous attempts to line up well-financed development proposals to take over the building, or at least parts of it, these new ones, too, have the familiar feeling of past ones — a feast of ideas and a famine of financing. If there is any one who can find a solution, it would seem to be a committee headed by Scott Ledbetter, well-respected, level-headed business leader. He normally labors under the radar, but whatever he takes on is normally a success. This one will severely test even his formidable skills.

We’ve learned a lot about The Pyramid since the FedEx Forum opened, primarily that it bears as much resemblance to a big-time sports venue as Tim McCarver Field did to AutoZone Park. Only now with the opening of FedEx Forum do we fully understand what was missing at The Pyramid all along – creature comforts, first-class finishes and a major league environment.

About half of The Pyramid’s original bargain basement cost remains to be paid, and if we learned anything from its history, it is that white knights are like free lunches. There aren’t any.

The theme park proposal being handicapped now as the leading one looks like an expanded version of one submitted years ago when the city and county governments were yet again looking for a developer for the 100,000 square feet of developable space on the north side of The Pyramid and the 10,000 square feet on two levels at the apex. This time around, the plan also includes the cavernous arena itself, but it still has the feel of a project in search of a raison d’etre. Or at least in search of financing.

At a time when Gaylord Entertainment’s deep pockets couldn’t make a theme park work at Opryland and national theme park chains are fighting for business, it’s not unreasonable to question the staying power of an indoor theme park for Memphis. Another leading proposal – an aquarium – is equally problematic. As Otis White said on Smart City, cities fishing for downtown revivals with aquariums have often come up short. Tampa and Long Beach, California, were forced to bail out theirs, and Denver let its aquarium go into bankruptcy and sold it for a fraction on the dollar to a restaurant chain. Aquariums were to the 1980’s what festival marketplaces were to the 1970’s.

Unpublished financial projections of city and county governments in the past raised questions of whether a development is financially feasible without major concessions from local government. It was essentially political fantasy that there would ever be a tenant who would pay off the building’s remaining construction debts of roughly $30 million, invest tens of millions of dollars, and spin off revenues to local government. The city and county financial pro formas from previous years show that lease payments were always considered political window dressing, because there were no expectations that there would ever be any.

As this most recent process unfolds – the fourth since construction of the building –two things point to the tough realities facing The Pyramid. If it had a use – tourist attraction, shopping mall, office building or grain elevator – that could generate big bucks and exploit a market niche, Memphis and Shelby County Governments wouldn’t have to knock on the doors of national developers (which remain closed). They would be knocking on ours. Even more telling is that in 14 years, no one has stepped forward with a plan to add the inclinator ride to the apex, although it has been considered the “cash cow” by city and county officials.

In the years since previous development processes came up empty, ittle has changed. The likelihood is remote that anyone will take responsibility for the building’s unpaid debt and also make a multi-million investment in it, whether it’s for a theme park, an aquarium, an outlet mall or even the world’s biggest Starbucks. The only way to hit those goals with certainty is going nowhere – a casino.

As a frame of reference, the MGM Grand Casino in Detroit has 75,000 square feet (about a third of the space of The Pyramid), cost $225 million to build (more than five times the Pyramid), employs 2,500 people, and 20,000 visitors go there every day, 24/7/365. Two-thirds of its vendors and suppliers are from Michigan, and its $400 million in revenues is more than the Detroit Tigers, Detroit Lions and Detroit Pistons combined.

It is unlikely that The Pyramid will ever be a casino, but regardless, its future is largely a crap shoot.