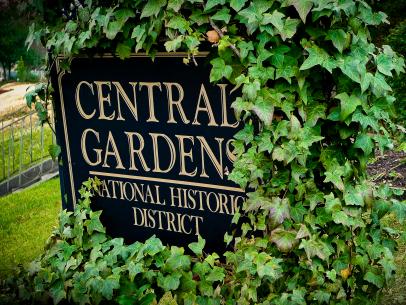 The Central Gardens Annual Home and Garden Tour returns after its COVID hiatus on Sunday, September 11, and there are several reasons to celebrate.

Yes, there is the rich history of the 511-acre district covering 83 blocks and there is the outstanding architecture of its 83 blocks, but there is so much more.

There is also the inspiration from a neighborhood which organized 55 years ago to protect and preserve its character, its architectural diversity, and how the lessons about the power of place and shared pride become models for other Memphis neighborhoods.

The upcoming tour is the 46th Annual Home and Garden Tour, the first since 2019 when the pandemic shut down personal interaction.  It will be held from 1-5 p.m. on Sunday, September 11.

It is the kind of event that speaks to the essence of Central Gardens: its walkability and how the best view of the neighborhood is as a pedestrian.

This year’s tour is centered on Belvedere Boulevard between Glenwood Place and Harbert Avenue, according to Shelly Rainwater, Association President in 2020-1.  The tour route is anchored on one end by Grace-St. Luke’s Episcopal Church and on the other by Cathedral of the Immaculate Conception.  Belvedere Boulevard will be closed from Peabody to Central.

This tour’s featured houses and gardens are at 267, 619, 655, and 656 S. Belvedere Boulevard and 1654 Harbert Avenue and gardens at 543 and 644 S. Belvedere and 1656 Carr Avenue. Docents will be on hand to provide historical information and answer questions.

A tour favorite, the Hospitality Area, will be located at a central point and will feature food trucks, beverages, and entertainment throughout the day.  Also located there will be the popular Artist Market.  There is also the promise of special guests who’ll be coming by.

Tickets are $20 in advance and $30 on the day of the tour.  Tickets can be purchased at centralgardens.org/hometour.  The same site provides interesting thumbnail sketches about each house and garden on the tour.

More Than Just A Tour

Ms. Rainwater said the tour is popular because “people love old houses, the history of them, and how their interiors and landscaping has changed and how people have adapted old houses to modern uses.”

As chair of the landmarks committee of the Central Gardens Neighborhood Association, Ms. Rainwater recognizes that the tour is important also for proving that a neighborhood united behind a shared agenda and motivated by unrelenting advocacy can control its own destiny.

The Association is proud of how it has advised other neighborhoods on how to get organized, to mobilize as advocates, and to have a powerful voice in attracting allies and articulating positions in places like City Hall.

That’s why the tour is about more than beautiful houses and history.  It is a lesson in neighborhood activism, which holds important lessons for other neighborhoods.

The Association was born in 1967 at a time when Midtown was threatened by population moving eastward and a growing disregard for how important it was to the future of the city itself.

“Many people don’t understand what we’ve done,” said Ms. Rainwater, who has lived in Central Gardens since she was five years old and remembers when things were touch and go.   “In the 1970s, t-shirts said ‘Midtown is alive and well.’ We stood strong as a neighborhood where there were 1,000 square foot bungalows and 10,000 square foot mansions.  My house was a boarding house, and in the 1980s, there were plenty of neglected homes.”

One key lesson learned from the Association is that it never rested on its laurels.  It has always had another goal to pursue.

It would have been easy to say mission accomplished in 1982 when the neighborhood was listed on the National Register of Historic Places, which comprises 1,540 structures on 511 acres.

In 1992, the Association began the steps that led to it achieving landmarks designation as a historic conservation district, which gave it the protections in City of Memphis Landmarks Commission.  Ms. Rainwater, chair of the landmarks committee, said that the Association has helped other neighborhood associations get their own landmark designations.

Acting on the mantra to always look to the future, the Association’s landmark committee is working on the next goal: to become a pedestrian overlay district that ensures the neighborhood remains pedestrian-oriented.

If there is an over-arching message from Central Gardens’ history for other neighborhoods, it is the crucial role of legal protections that comes with historic district guidelines, planning rules, and city ordinances.

For all of these reasons, the September 11 tour is more than just a pleasant time to walk through a historic Central Gardens neighborhood.  It is also an opportunity to consider how the lessons that have defined it can be applied to other Memphis neighborhoods whose character and personality are equally deserving of preservation and protection.

Refusing To Shrink From Our Problems

With the Beltline, Atlanta Looks to Become a New City