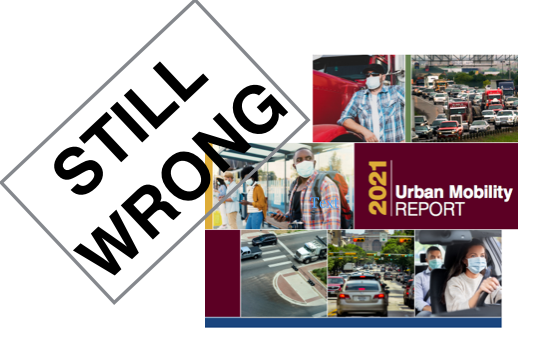 There was an unprecedented decline in traffic congestion in the US last year.  According to the Urban Mobility Report, there’s essentially nothing we can learn from this experience

Every year (or so), the Texas Transportation Institute generates something called the “Urban Mobility Report,” which is a dire lamentation on the supposed costs that urban traffic congestion imposes on Americans.

This past week, they’ve issued their latest report, covering 2020.  As everyone knows, the Covid-19 pandemic produced an instant and abrupt change in US travel patterns.  And that’s noted in the latest UMR.  Their measure of congestion—which, as we’ll explain in a minute, is deeply flawed and biased—actually showed a epic decline in congestion costs in 2020.  So far, so good. But wait.

Now, for scientists and the intellectually curious, you would think that actually experiencing a dramatic decline in traffic congestion would be, if not a cause for celebration, at least an opportunity to better understand the dynamics of the problem they’re purportedly concerned with solving.

Here’s the big, salient fact about traffic in 2020:  Travel declined by about 15-20 percent, but congestion—as measured by TTI—fell by about half. Here’s the data on quarterly travel volumes in 2020 compared to the previous year.  In the second half of the year, travel was down about 15-20 percent.

As we’ve stressed at City Observatory, this non-linearity (a small decline in travel produces a big decline in congestion) is the most important insight we can have about how to deal with traffic.  In Portland, during the height of the pandemic-fueled travel reductions, the city’s major freeways carried more cars at the rush hour, at higher speeds, because traffic levels were kept below the tipping point that causes cascading delays.

Traffic congestion is a demand problem:  too much demand at certain times, specifically peak hours.  If we can reduce demand, or shift travel to off-peak times, we can dramatically reduce congestion.  We have traffic congestion because we don’t price roads; we don’t systematically reflect back to users the costs their travel decisions impose on others.

The only effective solutions to traffic congestion involve congestion pricing, but “pricing” is one word you won’t find anywhere in the 2021 Urban Mobility Report.  The word “toll” appears exactly once.

TTI has never grasped the fundamental economics of traffic congestion.  They’ve always pretended that the transportation system can be run as if every day was free ice cream day at Ben and Jerry’s.  If you don’t charge users for your product, you get lines around the block and you’re always running short of money.

The real lesson of the pandemic, if we recognize it, is that measures to alter travel demand, especially ones that incorporate real time pricing, can re-shape demand in ways that reduce congestion.  In fact, evidence from the pandemic shows that avoiding over-loading roads at peak hours can maintain consistent high travel speeds and higher levels of vehicle throughout.

However, if you read the TTI report, you’ll never learn any of that. Instead, what you’ll hear is that when the pandemic abates, the world of transportation will trend back toward increased traffic and congestion, and well, we’ll just have to build more capacity to accommodate it.

That’s TTI doing what it has always done:  providing a rationalization for ever more highways in the name of trying—counterproductively, as it turns out—to reduce congestion.

Though it has been produced for decades, the Texas Transportation Institute’s Urban Mobility Report is essentially propaganda for road-building, not a critical analysis of transportation policy.  It is designed to generate heat, not shed light.  We and others have repeatedly refuted and debunked the methodology, metrics, and findings in this and prior TTI reports.  Some of the highlights:

Our experiences with a very changed transportation system during the Covid-19 pandemic could have been (and could still be) a powerful learning moment as to how to build more just, sustainable and efficient cities.  We observed that reducing transportation demand can greatly improve the function of the transportation system, reducing congestion and travel times, and improving air quality.  Greater emphasis on walking, biking, and repurposing public space for people instead of car movement and car storage can make our cities better places to live, rather than merely easier to drive through.  Alas, these are lessons that will never be learned by anyone who places any credence in the Urban Mobility Report.

City Observatory is a website and think tank devoted to data-driven analysis of cities and the policies that shape them.

The website will feature posts that tackle misconceptions about cities, break down the latest urban research, and highlight the innovative ideas that strengthen our communities.

The site will cover topics such as transportation, housing, gentrification, place making, economic opportunity, and industry clusters. Core topics will be addressed in issue “cards” that will be updated on a consistent basis to reflect the latest data and research.

Periodically, the site will feature in-depth research report and papers on urban policy topics like crime in cities, traffic congestion, neighborhood change, and migration.   City Observatory is based in Portland, Oregon—a city synonymous with creative urban thinking—but our vision is nationwide in scope, looking at the best ideas for promoting city success, wherever they originate. 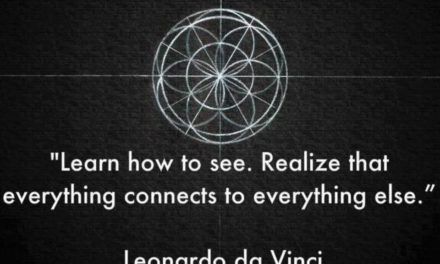