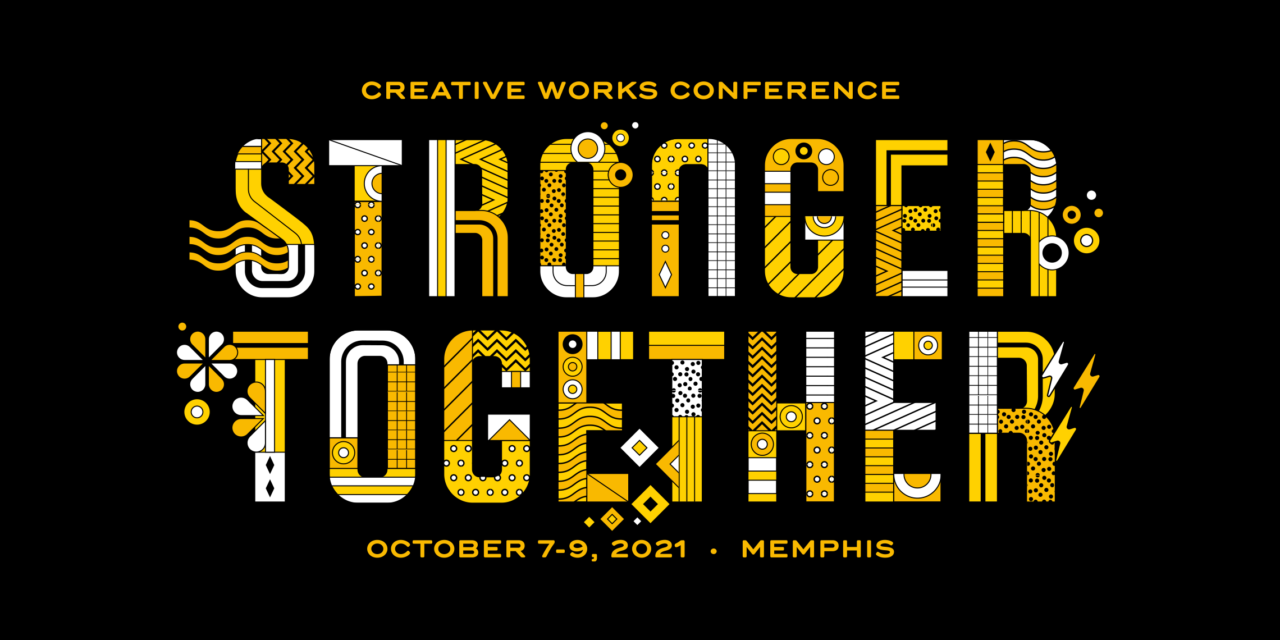 Creativity is a gift.

But it can be a lonely one.

That is a big reason why Memphian Josh Horton set out seven years ago to create a nationally important conference for creative workers that is part learning, part camaraderie, part celebration, and part motivation.

But most of all, the conference message is you are not alone.

Largely below the radar, particularly without the media coverage it deserves, the Creative Works Conference assembles 550 people from across the U.S. to review, recharge, and reimagine their work and even their careers.

While the results of their creative gifts are exhilarating for us, the process is often excruciating for them. These workers put themselves on the line.  Something born in their minds is ushered into the world where it can be ripped apart or widely praised.

It is an anomaly that some of the most powerful brand images in the country are the product of a creative workers working by themselves with only their imagination and their computer.

This is a spark for Mr. Horton that resulted in the Creative Works Conference in Memphis, which celebrates its seventh edition October 7-9.

Beyond the conference’s over-arching theme of creativity, it has been a test of Mr. Horton’s own creativity to keep it going.

From An Event to a Movement

It began as a nonprofit venture with a major Memphis foundation providing key funding, but when that foundation retrenched and cut contributions to dozens of Memphis ventures, his initiative was one of the victims.

It forced him to abandon the program of 50 events a year he was organizing to build a creative culture for Memphis with creative workers at its center, to enhance the quality of work, and to elevate their impact in a Memphis in need of its own creative solutions.  Despite the challenge, his determination kept the Creative Works Conference going as an annual event, that is, until COVID-19 upended last year’s plans.

The change in funding required a rethinking of how the conference could continue to exist in Memphis although other cities like Seattle would happily have become its home.  After all, some find Memphis an unusual place to learn from and be inspired by world-class talent and to connect with a national network of creative professionals – designers, illustrators, hand-letterers, photographers, copywriters, artists, storytellers, makers, agency owners, and creative entrepreneurs.

That said, the fact that there are more than 3,200 people on the Conference mailing list says volumes about the respect it has garnered nationally.

The conference at the Halloran Centre in downtown Memphis is a mix of diverse presentations and 10 skill-based workshops.  It also features a 36-vendor, curated maker market that is open to the public.

Put simply, Creative Works has grown from an event to a movement.

Creatives From Coast to Coast

“Creative Works is back in full force and we cannot wait to get in the trenches to learn, share, and gather with more than 550 creatives from all over the country,” Mr. Horton said.  “I look forward to the energy and passion of what should be an unforgettable weekend.”

With a background as art director at Ardent Records and then as art director for a record company and as part of a team of print designers in Seattle before returning to Memphis as part of a national network of designers working for some of the country’s best-known brands, Mr. Horton is positioned well to jump start the Creative Works Conference.

It was obvious from the beginning that it hit a nerve.  After all, it was his own desire to stave off lethargy and find “his people” that became an inspiration for the conference.  Clearly, others had similar feelings.

The second year of Creative Works Conference doubled capacity and was again sold out.  By 2019, 70% of the participants came from outside the region from as far away as Seattle and Brooklyn.

“The number one thing I know to be true about creative workers is that it’s really hard work, whether it’s someone in Memphis or Boise or Santa Fe or Portland,” Mr. Horton said.  “Even if you have a creative culture, the work is really hard and you feel alone.  Even the coolest people are alone.  Creative Works is about so many people going through the same thing with you and feel the same things.”

It is the power of connection that lies at the heart of Creative Works.  “People build real relationships at the conference,” he said.  “And connections are happening organically outside the conference.”

“The second priority is inspiration,” he said, adding that many creative workers in Memphis in particular feel uninspired and unappreciated.  “They’re not exposed to a creative culture like those in some cities.  Memphis doesn’t make as much out of design.”

The third purpose is personal growth.  “Creative workers are always learning and want to grow and this is a learning opportunity,” he said.

The lack of a creative culture in Memphis leaves many workers feeling disconnected, uninspired, stuck.  “Other cities have incredible amenities that help them refuel,” he said.  “We want to create a city where creatives thrive.”

Mr. Horton’s best reward for the hard work of organizing and executing the conference is the feedback he receives.  “I experience it when I’m in the thick of the conference,” he said.  “I get emails that say, ‘that this event changed my life” and ‘thank you for connecting me to opportunities.”

As for Memphis, “I see a change.  I wish it was more.  In the beginning, it was tough to get local agencies to come to the conference.  They were busy growing their own practice.  Now, more are sending their people.

“People outside Memphis are paying attention to what’s going on here and the changing narrative about Memphis.  Creative workers need to see more than low living costs in Memphis.  They need to see a lot going on and that we are raising expectations and experiences branded by creative people.”

Again, this year, the best news of all is that the impact and lessons from the conference will ripple from the event into the community and if we’re lucky, the emphasis of creativity will not just benefit creative workers but inspire better solutions for Memphis itself.