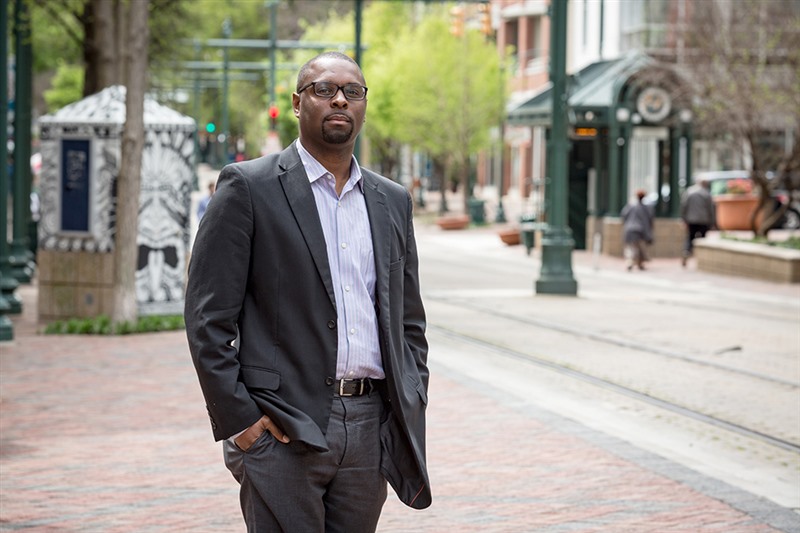 Paul Young, director of City of Memphis Division of Housing and Community Development, has been selected as the next president/CEO of the Downtown Memphis Commission in a long expected appointment.  He’ll take over April 1.

From the beginning of the search for a new leader, Mr. Young had been considered the front runner and that the appointment was his to lose.  The DMC launched a “national search” following president Jennifer Oswalt’s resignation Jan. 1.

Mr. Young’s appointment has been seen as such a foregone conclusion that people have been jockeying for his HCD job for weeks.

The DMC said Mr. Young was chosen from 30 other applicants, whose names were never released nor whether they lived in or outside of Memphis and Shelby County.  In an age where transparency and accountability are mantras, the DMC’s continued process to select presidents without serious community input or without disclosing finalists for the job needlessly feeds suspicions about an inside game and whether the national search is really conducted on a level playing field.

Equity and Good Will

None of this is to say that Mr. Young is unqualified and suited for the job based on his personality and his experience.  He knows what it takes to succeed in the DMC presidency and his outreach into every Memphis neighborhood gives him equity and good will that have not been held by any other person in the job.

In his interview with the Daily Memphian’s Tom Bailey, Mr. Young mentioned that transparency is an area of improvement for the DMC.  We should be particularly pleased that his emphasis on public transparency includes better information about PILOTs, a subject I covered in my last blog post, and contracts with minority companies.  (DMC’s data dashboard is especially good and proves that greater transparency is not a goal that DMC cannot achieve.)

While transparency should be the watchword for all public agencies and departments, it’s especially important for one with city, county, and state politicians on its board.  The lack of greater transparency feeds perceptions that downtown development is an insiders’ game tinged by politics and connections.

Mr. Young has operated in these kinds of politically charged environments before and he has managed to do it gracefully and without making any enemies, which will serve him well in his new job.  With engineering, business administration, and planning degrees and his experience as a financial analyst before joining Shelby County Government as a legislative liaison, he has wide-ranging knowledge about how to make things happen but also to evaluate if they deserve to happen.

After working as the legislative liaison for the county mayor, he was appointed in 2011 as  administrator of Memphis and Shelby County Office of Sustainability where he led development of the Mid-South Regional Greenprint and implemented  the 151 recommendations of the Sustainable Shelby plan rather than allowing it to set on a shelf like so many other government reports.

That too should drive his work at DMC because it has critical plans of its own, like the downtown parking study and the BuildDowntown master plan and how downtown fits into the Memphis 3.0 comprehensive plan.  These are complicated plans and so far, they have not been translated into communications that explains them persuasively to the public and why Memphians and Shelby Countians should care if they are implemented.

This emphasis on implementation characterized his time as head of HCD.  By 2014, Mr. Young had returned to Shelby County Government to become director of legislative affairs before being appointed director of HCD by Mayor Strickland when he took office in January, 2016.

While his direct experience managing legislative relationships is strong, it is also encouraging that as a former county government employee, he can bring a renewed understanding that the DMC is a county and city board.  It’s a fact often overlooked and while there was no comment by Shelby County Mayor Lee Harris in the DMC’s news release about Mr. Young’s appointment, hopefully, they did ask for one.

If the best predictor of the future is the past, Mr. Young at HCD built stronger communications, better measurements, more accountability; wrote a new mission statement and translated it into an action plan; installed better financial systems and checks and balances; and concentrated on building an effective, motivated team.

The changing of the guard regularly results in an assessment of an agency’s finances and policies, so that is likely to happen.  It’s also a good time to evaluate the Commission’s PILOT priorities and the size and terms of tax breaks.  At a time when public concern about PILOTs is growing, they seem to be getting bigger and longer.

At a time when the DMC says downtown population increased at 15% and apartment occupancy is around 95%, and there is a national trend for millennials to prefer residences within three miles of downtown, it raises the question of why sizable PILOTs are still being granted for apartment projects.

As the person overseeing the Tourism Development Zone projects and the revenues supporting them for the Strickland Administration, he has experience with tax incentives and balancing the books.  That said, in his DMC job, he will need to demonstrate that he can work with the Strickland Administration but not at its direction, or put another way, he will need to cultivate his own agenda while working with local government but not become an extension of it.

There is much for Mr. Young to do. The streetscape and physical condition of downtown needs attention.  Improvements to Main Street was just the beginning, not the end, of what downtown needs.   Mr. Young will also undoubtedly be focused on the considerable remaining work that has to be done so downtown development is not as bipolar in the future as it has been in the past.

Lesson From The Past

Three presidents ago, Paul Morris led the downtown development agency, and his greatest strength was that he was willing to speak truth to power as an unrelenting advocate for downtown.  It didn’t matter who he was talking to, he did not see his job as going along to get along.

He’s a good model for what the president’s job should be.  He injected a sense of urgency and was fearless in calling out negligence when he saw it, in articulating what downtown should be, in fighting to keep businesses downtown when they were tempted to look eastward, and in even filing lawsuits to prevent blight by absentee owners.

Based on his strong relationships through the community, Mr. Young should be able to do the same.

He is adept at keeping his ear to the ground and that’s certain to continue.  While he will be pulled in all directions by politicians and developers wanting something from him, he’s unlikely to ignore voices from the grassroots.

With four of Tennessee’s highest poverty zip codes surrounding downtown, it is only logical that the DMC should develop some new and renewed relationships.  As HCD director, he’s been active in reaching out to neighborhoods in Memphis.

Now, while driving the progress of everyone’s neighborhood – downtown – he has the opportunity to leverage his own good will to benefit DMC and to explain why the success of downtown is the success of every person in Memphis and Shelby County.

For some, Mr. Young was described as the safe choice.  That grossly undersells his experience and his knowledge.  In charge of his own agenda, unleashed to drive his own policies, and with a new independence to make his own decisions, the prediction here is that he will convincingly pass this test of leadership.