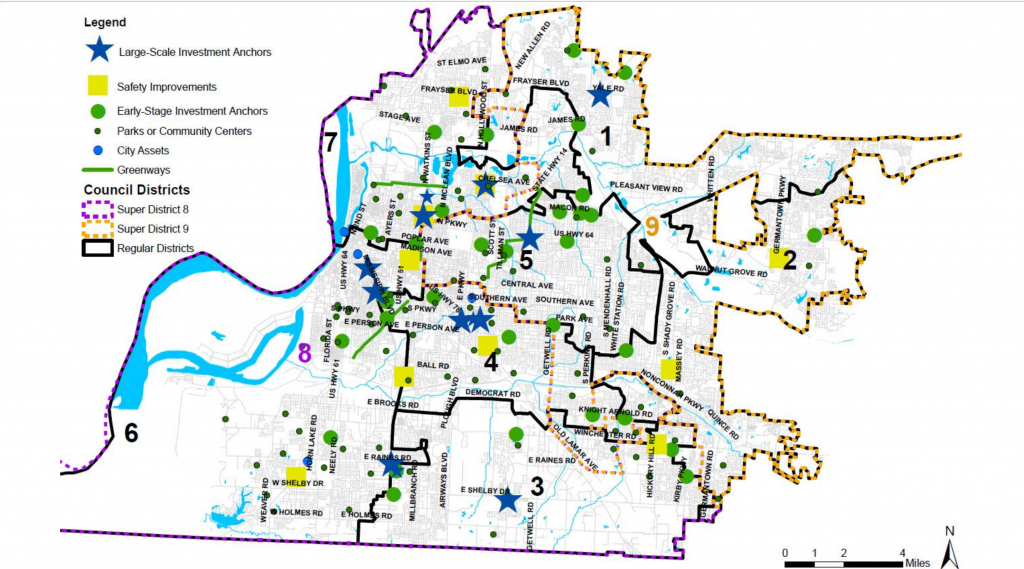 Thumbnail: Memphis Mayor Jim Strickland’s $200 million investments in Memphis will ripple throughout the city.  As the details are fleshed out, here’s hoping they are integrated into a specific, tailored plan for each neighborhood.

It’s hard to think of the last time the City of Memphis spent money from its own budget to make a sizable investment in its own city.

There have been expensive projects like $250 million for a place for the Grizzles to play – improvements to The Pyramid and construction of FedExForum; however, the complex financing plan had a modest amount of direct city funding with most of the payment for $202 million in revenue bonds coming from special revenue streams.  City of Memphis – and Shelby County Government – only provided $12 million each (not counting the $6.3 million city government paid state government for violating an agreement).

There was of course the $197 million in bonds for the “Pyramid and Pinch District Redevelopment Project” – about $70 million for Bass Pro Shops to convert The Pyramid into a 220,000 square foot mega-store, $75 million to buy out Shelby County Government’s interest in the convention center, and the remainder for projects to be designated.  There was no money from city government’s budget and the bond debt is being paid with increased sales taxes within the downtown Tourism Development Zone.

Of course, there’s also the often overlooked $245 million spent at Memphis International Airport for changes to Concourse B so the facility is more aligned with current operations. No money from city budget was spent there either.  The Memphis and Shelby County Airport Authority has its own revenues, and the bond debt is being paid from state and federal grants, passenger facilities charges and other authority capital funds.

So, yes, there have been some expensive projects built inside Memphis, but never did City of Memphis step forward to invest in its own city from its own budget.  Perhaps, the fallout from the controversy and FBI investigation when former Mayor Willie W. Herenton’s intervened to put a Little Rock campaign contributor into an MLGW bond deal chilled the interest in being associated with bond issues.

But that was 2004 and before then and since then, Memphis has been a city worth investing in.

This blog has written for about a decade about the investments other cities were making in their neighborhoods, housing, infrastructure, parks, and more, and urged City of Memphis to issue a substantial amount of bonds to keep competitive.

That Memphis Mayor Jim Strickland – budget hawk and well-known for his hyper-caution – would be the person to make it happen defies expectations.  His recommendation for $200 million for more than 100 projects for parks, neighborhood improvements, new and better streetscapes, energy efficient street lights, renovation of historic Melrose School, broadband expansion, and demolition of a long defunct drive-in in southwest Memphis means that his program, “Accelerate Memphis,” will be ripple throughout the city.

The mayor being the mayor, there was also an announcement for a new program to reduce violence and murders.  The new program, which aims to be more predictive, will be headed by Joy Touliatos, political friend of Mr. Strickland and former Juvenile Court clerk who finished third in 2018 in a three-person race in the Republican primary for Shelby County Mayor.  Her resume doesn’t indicate any deep expertise in this area and her appointment indicates that its key target will be juveniles and gangs, a favored theme of the Crime Commission, which invariably has influence on these kinds of initiatives.

It Needs To Be Part Of A Plan

Former Atlanta Mayor Shirley Franklin’s “Purpose-build Communities” approach deserves consideration.  As she said, “neighborhood transformation is not a complementary fight on poverty; it is the central one.  A specific, tailored plan is needed for every distressed neighborhoods.  Alternative models must be developed for success, measuring results, and replicating them as rapidly as possible.”

Hopefully, Accelerate Memphis will not be content with investments in disconnected “nurture anchors” like bus shelters, light pole banners, crosswalks/sidewalks, road diets, street light upgrades, street trees and furniture, and closed curb cuts.  All of these are good, but unless they are part of a specific, tailored plan for the neighborhood, the promise is greater than the impact.

All that is prologue.  Whatever brought Mayor Strickland to this moment it is a welcome one.  His primary talking point is that “Accelerate Memphis” will jump start economic development post-pandemic.  Memphis was one of the last two cities after the Great Recession to return to pre-Recession numbers, so it’s a tall order, particularly in the way that COVID has laid bare once again the barriers to Memphis’ success.  Economic drags like too many people living in poverty, too many working poor, a yawning racial income gap, and no growth population.

How and if this investment will change the trajectory of these long-time problems remains to be seen, but Mr. Strickland is right that some “stubborn problems are deeper than any single yearly budget can solve.”

A Plan Not Destined For The Shelf

This isn’t the time for nitpicking – whether it’s the program’s definition of an anchor or whether this much can really get done for $200 million – but it is the time to commend the mayor for taking action when he could easily have begged off because of revenue shortfalls and the damage the pandemic has done to city budgets.

Few people see all of Memphis like a mayor does, and it’s hard to imagine that Mayor Strickland isn’t aware that Memphis doesn’t have a margin for error and that its economic performance lags cities that Memphis once outperformed.

Hopefully, his Accelerate Memphis spending can have an impact on that, but this is certain: it can’t be 20 more years before another Memphis mayor has the courage to take this kind of dramatic step toward funding projects throughout Memphis.

It’s also encouraging that he’s done it within the framework of Memphis 3.0.  He was a reluctant supporter of the city’s first comprehensive plan in more than 50 years, sometimes referring to it as Wharton’s plan.  However, he has not only embraced the plan but he has put money on the line to do what it recommends.

Considering how many plans in the past were destined for shelves in City Hall, it’s heartening for this one completed on his watch to be followed up by him with real money to do real things.  The need to pitch it as an economic stimulus is smart politically, but its impact on the economy itself is likely to be marginal.  What’s more important is that for the first time in decades, more than 100 Memphis neighborhoods will have significant money spent on them.

On February 13, 2013, I wrote about the imperative to invest in Memphis:

“Memphis is at a point where it can’t ignore the need for these investments any longer.  Many of its facilities are largely unchanged since the 1960s, and as a result, are frequently in the wrong place because of population shifts and demographic changes.  Most neighborhood libraries were built before there was Internet although libraries today live as information centers with heavy technology demands from patrons.  As for city parks, there has been interest in a comprehensive plan for a number of years, including the need to set standards for the types of equipment in various sized parks and to bring all parks up-to-date.

“There are landscaping and place-making projects that can improve major entry points into downtown and improve and animate the riverfront.  In addition, there are various plans for community redevelopment and for creation of new grassroots economic activities and opportunities, but these are the kinds of programs that tend to take second, or third, place on priority lists.  It’s past time to move them to the front burner.

“Memphis is seeing the signs of a city that invests too little in itself and it’s time to put emphasis on city facilities in neighborhoods that are the hubs of community.  These are not frills, but instead, they are the basics that Memphians have the right to expect.

“An ‘Investing in the Future’ program gives Memphis that opportunity, and it’s hard to think of investments that would be more important in attracting talent, in telling middle-class families that they should consider Memphis, but most of all, it sends a message to Memphians – particularly children – that their own city values them.

You Are Where You Are

“In 2010, the Knight Foundation and Gallup joined hands to survey 43,000 people in 26 cities, producing the so-called ‘Soul of the Community Survey.’  The main questions answered were: What makes people love the place where they live and what attracts people to a place and keeps them there?

“The survey concluded that the most important factors that create emotional bonds between people and their communities were not jobs, but ‘physical beauty, opportunities for socializing, and a city’s openness to people.’  It also concluded that cities with the highest level of citizen attachment had the highest rates of GDP growth and the strongest economies.

“Edward T. McMahon, in Urbanland, wrote: ‘Author Wallace Stegner once said: ‘If you don’t know where you are, you don’t know who you are.’  We all need points of reference and orientation.  A community’s unique identity provides that orientation, while also adding economic and social value.  To foster distinctiveness, cities must plan for built environments and settlement patterns that are both uplifting and memorable and foster a sense of belong and stewardship by residents.’

“Ultimately, that is the mandate for ‘Investing in the Future’ of Memphis.  It’s investing and defining our distinctive sense of place and creating people who are proud to live in their city because of the civic qualities that give it meaning.  More than anything, it’s not just a matter of pride but serious economic competitiveness.”

The motivation behind my “Investing in the Future” program for Memphis is captured by “Accelerate Memphis.  The devil will be in the details, like any project of this size, but best of all, it can begin a journey toward a stronger future, because a city that can do more than put more police on the streets is a city that is better prepared for what lies ahead.