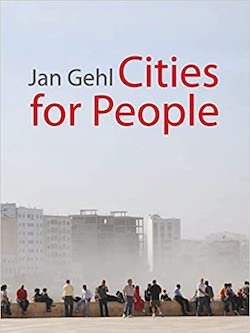 Anyone interested in cities designed for people rather than cars and how appealing, vibrant public spaces can transform a city is likely aware of Jan Gehl, author of Life Between Buildings (1971) and Cities for People (2010).

In his 60-year career, the Danish architect has renewed public spaces in cities around the world and his work has been the north star for many city planners focused on place and people.

Realizing World-Class on the River

Mr. Gehl has two offices – in New York and San Francisco – applying his “Making Cities for People” philosophy in the U.S. in designs based on social science research on the needs, desires, and behaviors of people.

Four years ago, two of his colleagues, Matt Lister of New York and Blaine Merker of San Francisco, spent a couple of days in Memphis and offered their insights about what they saw.

Their recommended slogan: “Downtown is where Memphis meets the river.”

Mr. Merker added that Memphis should make the “commitment to saying ‘we want a world class park on our world class riverfront,’” and suggested that ambition was not incompatible with maintaining a space also conducive to Memphis in May.

But I digress from the topic of this post: Mr. Gehl.  He recently talked with the staff of Island Press, about his 60-year career:

Island Press: Next year marks 50 years since the publication of Life Between Buildings; this year is the 10th anniversary of Cities for People. What is the major difference between the two books?

Gehl: The difference is 40 years. The first one was a call to attention, saying something is wrong; the second was my attempt to sum up what we have learned in these 40 years of research and projects around the world. It is a great joy for me to see that in just ten years, this book has been distributed all over the world, and printed in 35 different languages. We have Bengali, we have Hebrew, we have Turkish, and we have hopefully also Slovenian. And very shortly, I expect to see something happening in the Philippines.

Island Press: It was a radical assertion in 1971 that cities should be designed for people rather than cars. That vision has since reshaped cities all over the world. But right now, we’re in the midst of a pandemic and people are kind of scary. How can humanistic planning respond to this moment?

Gehl: My take on this is that our cities have seen many catastrophes. We’ve had earthquakes, inundations and tsunamis, wars and invasions. We’ve had the plague, cholera, the Spanish flu, tuberculosis, AIDS and Ebola.

After each crisis, we bounce back to being human beings again, because there’s something built into us that makes us love to give hugs and be close and have shared moments; to enjoy parties and festivals and ordinary day-to-day life talking with the neighbors.

Looking back to history, I found that when it is about bacteria and viruses, the architects don’t have good answers. One example is what I call the anti-tuberculosis buildings. In response to the spread of TB, the modernists declared that we couldn’t live together in cities. We have to spread out in individual houses, surrounded with grass. And they continued 40 years after tuberculosis was defeated by antibiotics and vaccines.

But all these people who lived in separate buildings with unusable public spaces between the buildings, they started to be lonely and alienated. So we saw a new set of illnesses that were not related to bacteria and viruses but to the conditions of life and work.

Architects and planners should concentrate where we really have an influence. We can make nice cities for people, places where people are not so lonely, and where isolation and depression are not so widespread.

I think that homo sapiens has not changed much since I started studying him/her. That’s why when I was asked about the previous book, Life Between Buildings, will I change something there, I could just say that it’s about homo sapiens in the built environment, and as far as I can see, it’s the same species as we had 50 years ago.

Island Press: So homo sapiens hasn’t changed, but has your vision changed or evolved in the 40 years between your two books?

Jan Gehl: It hasn’t changed very much at all. What has changed is the world’s treatment of this vision. When I started, many of my colleague architects said, “Oh, my dear, you’re wasting your time. You’re ruining your career. That is not a thing to do.”

But it caught on. The wind has changed from a headwind to a tailwind. It started to change about 20 years ago. And that changed my position, from being a guy who was in revolt against what my colleagues were doing, to being a guy the colleagues are looking up to and asking for advice. It’s a fantastic thing for an old guy like me to see my life project be widely used.

Island Press: When we published Cities for People, we urged you to put the content of the book in context of climate change. And at that time, you felt that was outside of your area, your comfort zone. Has your thinking about climate change changed since then?

Gehl: Two subjects have come more to the fore in the years since this book was written and published. One is climate change; the other is the “sitting syndrome”—people have to move more and drive less in cars and be more active during their life, so they can have a longer life and a better life.

The fact is, building cities for people addresses both. If you do that, you’re well on your way to a CO2-friendly city, where people can walk and bike and avoid the sitting syndrome. So actually, this kind of humanistic thinking is very green and healthy also.

Island Press: Were there any big surprises—good or not so great—over the years since your early work?

Gehl: Yeah, one thing that has popped up as a major issue is terror. We can see cities all over the world putting up terror protections with boulders and concrete and barriers.

Another thing, which is really worrying me a lot, is the change from people buying their stuff in stores to buying on the Internet. So instead of people walking up and down the streets, we now have cars going up and down with deliveries of parcels.

And we see lots of changes in the character and the number of the shops. The shops as we know them, in the western world, will be fewer and farther between. What will prevail is bars, coffee shops, and restaurants. Also nail and hair salons and massage—things you can’t buy on the Internet. Problem is, these businesses don’t have the money the shops had to pay for holiday decorations and upkeep of the city. And they will not be able to take over all the shops that are left open or empty.

Island Press: So you’re more worried about Amazon than about the pandemic.

Island Press: What are some of the obstacles to making Cities for People more pervasive around the world?

Gehl: The major challenge for city planning in the coming 20-30 years will be the cities in Africa, Southeast Asia, and South and Central America, where some 90% of all the growth of human population will happen.

The principles of humanistic city planning, where mobility is secured through bicycling and walking and public transportation, will be a good thing for these rapidly growing economies. And all this talk about smart city and autonomous vehicles, that’s fine. But that’s not for Southeast Asia and for Africa in the foreseeable future. These are gimmicks for economies which are very strong.

Island Press: You’ve implemented changes in so many different cities through your work. Is there one thing that convinced city leaders to create more human-scale cities?

Gehl: The major driver is that people have become sick and tired of the old model. They are tired of modernistic, singly placed buildings and public places completely dedicated to the automobile. They are tired of the noise and pollution and CO2 production. Now we’ve had 50, 60 years of that getting increasingly worse, and they are ready for new ideas on city planning.

That’s why in Moscow and Sydney and Melbourne and New York, these ideas have been met very favorably. I can see from my shelf here that they liked them, because I have all these plaques and medals and stuff, thanking me for the revival of the city. That’s nice for an old guy, to look at that.

This interview was published previously at Planetizen.com.

Moving From Nowhere to a Bikable Memphis