Including LGBT Equality In MLK50 Discussions 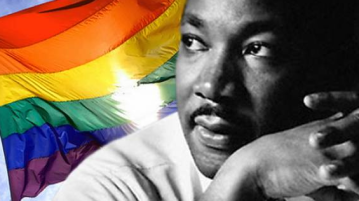 As we approach the commemoration ceremonies for the 50th anniversary of the murder of Dr. Martin Luther King Jr., there’s never been a better time to redouble our commitment to ending second class citizenship for any American, and that particularly applies to our LGBT friends, families, and fellow citizens.

It has been said that even the devil can find Bible verses to justify his actions, and the same can be said about Dr. King’s inspirational words.  In the past five decades, it has been said that he would not support same sex marriage or equal rights for gay, lesbian, bisexual, and transgender people.  At the same time, others – including his widow, Coretta Scott King – minced no words in refuting those who would use his legacy to deny full rights to others.

Hopefully, in the many discussions about the meaning of Dr. King’s life that will take place in the coming days, there will be no dispute about the impossibility of taking his principles and his forthright declarations and use them to suggest that he would support Don’t Say Gay, License to Bully, Turn the Gays Away, and transgender bathroom legislation that has been forthcoming in so many extreme right wing legislatures across the U.S., including our own.

If there is any question about equal rights for every American, we hope that it will be made clear at panel discussions and speeches at the National Civil Rights Museum, AFSCME’s “Mountaintop Conference,” and other venues where the past 50 years will be explored to find meaning through signs of progress and urgency from signs of lethargy.

Just as those who perpetuate bigotry based on race continue to create barriers to full access and opportunity for black and brown people, there are those who continue to do the same when it comes to full rights for people who do not reflect their hetero-centric view of the world.

Yes, there has been earth-shaking progress as support for same sex marriage turned upside down in only a few years and quietened many vocal opponents along the way, but no, that does not mean these people have given up in their fight to prevent the LGBTQ community (and African Americans and Latinos for that matter) from full participation in American life.

There are sham voter fraud investigations to limit access to the ballot box by black and brown people, there are voter ID laws aimed precisely at people of color, there are get tough immigration laws aimed at keeping immigrants marginalized and from registering to vote, and there are threatened changes in the decennial census that are aimed more at intimidation than accuracy.

As for the Census, the Trump Administration cut questions in the 2020 Census about sexual orientation and gender identity that would have established a baseline to track whether progress is being made over time.  Removing the questions also eliminates information that could have been used to call for policy changes and allocation of resources.  To underscore the overriding goal, the Division of Health and Human Services and the Division of Housing and Urban Development also cut LGBT questions from their surveys.

Smart policy relies on good data and eliminating the Census questions allow officials to cling to the belief that no LGBT people use their services or live in their districts.

It has been said that the Census is a snapshot of the American family but LGBT people have been erased from the picture.

Meanwhile the most significant threat to the LGBT community are the hypocritically named “religious exemption” laws being passed by state legislatures.  They are in truth thinly disguised attacks on equal rights, and more accurately, they are “licenses to discriminate.”

The most publicized “religious exemption” cases involve wedding cakes, but they are designed to distract from laws that allow doctors, counselors, and even pharmacists from treating every customer and client the same.  It is yet another direct hit aimed at the Civil Rights Act of 1964, which enacted the idea that people can’t discriminate against others because of who they are.

In the past, some businesses paid women less than men because men were heads of the household, some refused service to people living with HIV because they were sinful, some refused service to African Americans because they were inferior, and African Americans and LGBT individuals were denied adoptions because of prejudiced attitudes.

We thought we were past such a judgmental time when people opening public businesses could deny service to certain people.  But today, that discrimination is being enabled by state legislatures and even the president of the United States.

In other words, these laws are not exemptions, religious or otherwise.  How can there be exemptions when there are no laws protecting LGBT people in the first place?

Tennessee law does not prohibit discrimination on the basis of sexual orientation or gender identity, and about a year ago, Tennessee Governor Bill Haslam signed legislation requiring words in Tennessee laws to be interpreted within their “natural and ordinary meaning.”  No other state has a similar law, and the so-called Family Action Council – which reserves to itself the right to define what makes a family – lobbied for the wording to make sure judges are prevented from using the gender neutral word, spouse.

So much for being judged “by the content of their character.”  We understand the homophobia that has long been expressed in some parts of the African American church, and it was likely that these were the roots that led Dr. King’s youngest daughter, Rev. Bernice King, to march to her father’s gravesite to oppose same sex marriage.

She said: “I know that in my sanctified soul that he (her father) did not take a bullet for same sex marriage.”  Of course, it begs the question that in 1968, marriage equality was not an issue that was even on the most ambitiously progressive agenda in this country.

While we would never criticize someone who dealt with a tragedy that up ended her life at the age of five, we rely on Dr. King’s widow for our guidance.  Mrs. King said on March 31, 1998: “I still hear people say that I should not be talking about he rights of lesbian and gay people and I should stick to the issue of racial justice, but I hasten to remind them that Martin Luther King Jr. said, ‘Injustice anywhere is a threat to justice everywhere.’ I appear to everyone who believes in Martin Luther King Jr.’s dream to make room at the at the table of brother and sisterhood for lesbian and gay people.”

On April 1, 1998, only a few days before the 30th anniversary of Dr. King’s assassination, she said: “Homophobia is like racism and anti-Semitism and other forms of bigotry that it seeks to dehumanize a large group of people, to deny their humanity, their dignity, and personhood.  This sets the stage for further repression and violence that spread all too easily to victimize the next minority group.”

Mrs. King’s words remind us that there may be no better time for the struggle for true freedom and equality for people of color and LGBTs than now while the whole world is watching us as we observe the life of Dr. King and reaffirm our commitment to human rights, dignity, economic justice, our shared humanity.

Words to Inspire Every Teacher – And A New School Board

Taking Our Eye Off The Ball