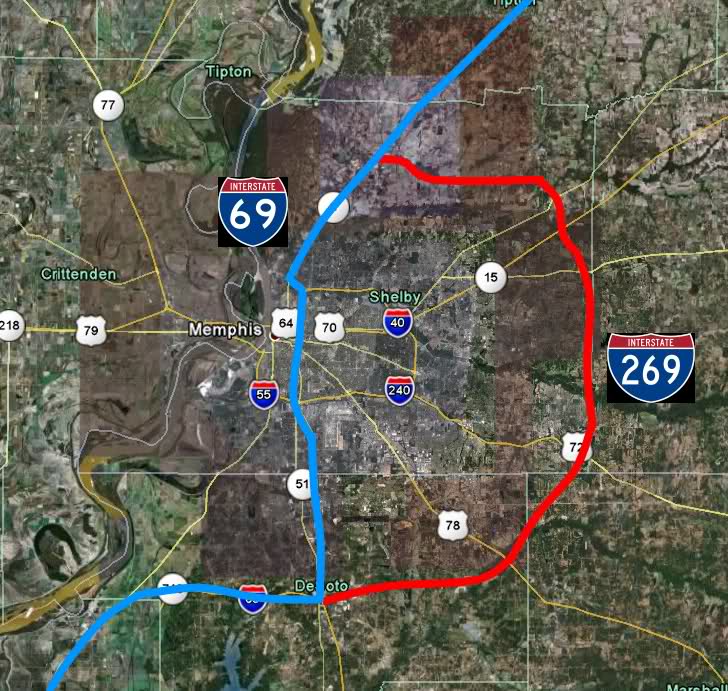 “Sprawl is a rot that tends to consume the old city. We can hope that Memphis is just 20 years behind other cities, as people across the country have come to recognize that high-density living is actually easier living. Other old cities are coming back, maybe we will see the same for old Memphis in the next 10-15 years. If not, Collierville, Southaven, etc., will ultimately find that the suburbs cannot be secure without the city.”

That was the comment by David Ciscel, former chair of the Economics Department at School of Business at University of Memphis and Senior Consultant for the Federal Reserve Bank of St. Louis, to our last post, No Reason for Memphis Celebration for I-269 Completion.

His comment also led us to read again his seminal work on sprawl: The Cost of Urban Sprawl in the Memphis MSA, which was written for the Federal Reserve Bank of St. Louis.  It’s required reading.

Dr. Ciscel’s comment was part of a lively discussion that took place in reader comments following our post suggesting that the completion of I-269 is nothing for Memphis to celebrate because it once again is another public investment fueling sprawl.

Driving Us The Wrong Way

It is another time that our priorities seem to be more about moving boxes and trucks than building quality of life and a stronger city at our regional core. After all, I-269 was not built because of a proven need, but rather, it was built because politically connected, moneyed interests wanted it in order to open up the greenfields of North Mississippi and Eastern Shelby County for development.

The last post cited the history of the political machinations that brought this pork barrel project to fruition, making the point that those of us who care about the future of Memphis and the factors that undermine its chances for success must be more vigilant, more strong-willed, and better organized to fight for a city that deserves better.

While I-269 is indeed a driver of sprawl, more to the point, it is a driver of the entrenched economic segregation in this community whose dangerous trend lines threaten our economy, limit access to opportunity, and lower the odds for children living in poverty to break out of it.

The Twins: Sprawl and Economic Isolation

Memphis is #1 in economic segregation among the largest 50 metros in the U.S.

Well-connected cities have less division between economic groups, and based on the recent decibel level here, it shouldn’t be too surprising that we are at the top of the list of economically segregated cities.

Meanwhile, economic segregation results in concentrated poverty that is the seedbed for our city’s most serious problems and derails our best efforts to address them. Projects like I-269 promise only to make them worse, because every problem becomes harder to deal with in cities that are economically segregated.

At the same time, the cause and effect — connecting the dots — between sprawl, the high tax rate, and an economically polarized city are overwhelmed by the influence of those who drive these transportation projects.

The inattention to the urban center that fuels our regional economy is symbolized by I-269, but its impact will be real and immediate. It will further produce an economically polarized city where fewer and fewer Memphis workers are paying more and more in taxes — including those spent for services and amenities that are in truth regional in nature.

Most of all, it is baking inequality into the economic geography of our region.  It limits life choices for children born into neighborhoods of concentrated poverty and limits opportunities for adults who have less mobility to reach jobs, job training, and public services.  And in a region where the highest concentration of poverty is farthest from job centers, all of us pay a price.

Wrapping I-269 in a shroud of terms like smart growth, knowledge economy jobs, New Urbanism, and open space protection, supporters of the interstate suggest with straight faces that Memphis will benefit from new economic growth and development that the interstate will provide. If our past teaches us anything, it is that the I-269 corridor will be characterized by unwalkable, car-centric sameness and it will pull investments and people farther and farther to the south and east county lines.

Someone from North Mississippi said in an article in The Commercial Appeal that the task now is to apply smart growth principles to I-269. We’re not sure when we’ve heard such a contradiction of terms. It reminds us of the story on NPR about the developer proudly boasting that he had built the region’s most sustainable residential development – green energy, walking trails, etc. There was only one problem: it was an hour commute to New York and an hour and half commute to Philadelphia.

It’s the kind of green-washing that’s being done by developers and economic development types to try to put a pretty face on projects that are clearly unsustainable.

These are the forces driving Memphis’ trajectory and defining our future. There is nothing in I-269 that does anything to improve these trends. More to the point and despite the denials by suburban cities, the trends of Memphis will in fact determine the future of the entire region.

If Memphis must live with the problems that are exacerbated by I-269, we must do more than all pledge our commitment to regional planning. More to the point, we must change policies so that new highways do in fact mitigate their negative impact on Memphis.  (Listen up, MPO.)

For example, we’re said previously that I-269 and Tennessee 385 should be toll roads. They could produce more than $100 million a year that could be invested in strategies to strengthen our core city and to make Memphis a city of choice.

Then too, there were other things like green preservation zones, limited access, and user fees that could have been taken to mitigate the negative impact of I-269, but local officials failed to play hard ball with the Tennessee Department of Transportation and the Bredesen Administration, and as a result, Memphis’ interests were given little weight in the decision-making.

In a perfect world, our local and state officials would simply have turned down the federal money for I-269, calling Mississippi’s bluff and leaving it with the interstate version of an oxbow lake. Perhaps, it’s not too late to call on our leaders to say enough is enough and make the most important decision facing them – doing what’s right for Memphis – but it requires us to move past the “any road is a good road” attitude that leads us to take money for damaging projects from state and federal sources..

I-269 exists because of politics. That’s why we think the answer needs to be found in the same place.

These are difficult times for the Memphis metro – let’s say it again, metro. Unlike most other metro areas, the cancerous problems that threaten our economic health are regional and not just the problems of the city. Unless we figure out how to avoid self-indulgent projects like I-269 and make the investments that strengthen our entire region so that it is prepared for the fundamental restructuring of the economy that is well under way, we will prove that the road to hell is indeed paved with intentions that aren’t always good.

In the end, it’s not great roads that will draw jobs to Memphis. It’s great quality of life, a culture of creativity and a willingness to support dreamers and entrepreneurs that will attract the talented people that in turn attract jobs to our community. The blind pursuit of more lanes and more roads without the fuller context for community in time creates an incomplete plan for transportation and replicates the same mistaken policies of the past.