We can’t really say we’re surprised, because on January 29, 2016, we wrote about the hazards posed to downtown walkers by the deplorable state of pavers on some parts of Main Street.

Last week, a worker in what has been dubbed downtown’s creative district centered at Union and Main walked out of Aldo’s, tripped over one of the inverted pavers, and broke her ankle.

Somehow, we suspect she’s not the first person injured by the negligent maintenance of what should be downtown’s most walkable street.  She just happens to be the first we know about.

It says volumes that such an obvious risk for walkers – as well as the potential for havoc for bicyclists – has been ignored for so many months.  The fact that the pavers were knocked askew so shortly after Main Street’s deplorable condition was finally repaired as part of the Main to Main Multi-Modal Connector Project makes it all the more frustrating, because finally, it wasn’t embarrassing to take visitors on a stroll on downtown’s most prominent street.

All in all, Main Street has paid a serious price for poor planning.

After all, it took 15 years before the street was finally improved.  It was unbelievable that at a time when our community was spending tens of millions of dollars to attract tourists, businesses, and residents to downtown, our downtown development commission and city government were content to welcome them with a shabbiness unmatched in any city of our size that we’ve ever visited.

The worst thing about the lack of attention to the current problems with the pavers is that it suggests the “good enough” attitude that so often permeates projects here, as we pointed out in a recent post about Shelby Farms Park.

But, in addition, the years of inattention reflect the tendency of local government to build marquee projects without providing for their maintenance in the future or even to consider the life cycle costs for roads, buildings, public places, and more.

It’s tempting to simply regard it as benign neglect but there’s really nothing benign about it, because it undercuts Memphis’ quality of life and delays repairs that are seriously needed until they become crises.  The good news is that we are told that Memphis Mayor Jim Strickland’s “brilliant at the basics” philosophy includes taking a new approach to these longer-term maintenance costs.

We had hoped the Main to Main project was serving notice that those days were gone, but it seems that we spoke too soon.

We were euphoric about last year’s improvements to Main Street after at least 15 years of dereliction by City of Memphis as shown by broken pavers, amateurish plywood repairs over broken grates, dead plantings, and more.

The improvements were made as part of the “Main Street to Main Street Multi-Modal Connector Project” whose big play is to add a pedestrian/bike connection to century-old Harahan Bridge. 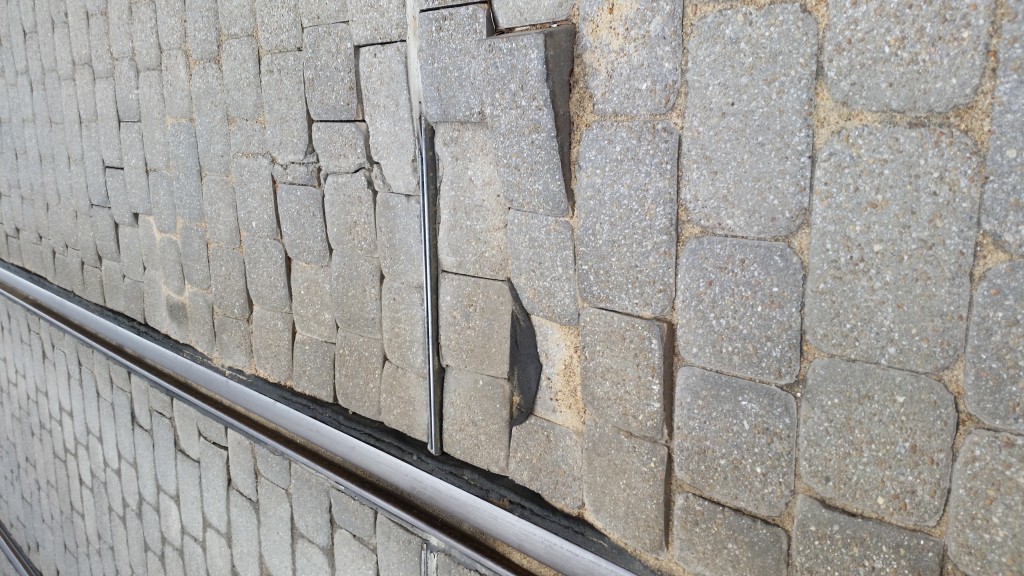 Under the direction of former Downtown Memphis Commission President Paul Morris, the plywood and broken pavers became things of the past. As we wrote in the wake of Mr. Morris’ departure from the downtown redevelopment agency, “Main Street is a place where we can proudly walk again with visitors in Memphis.”

Well, it turns out that we may can walk proudly, but we sure need to walk carefully.

Again, Main Street is already an obstacle course. It appears that the new MATA buses posing as adequate replacements for the long AWOL trolleys have been tearing up the pavers that were only recently repaired.

Up and down Main Street, there are askew pavers along the trolley track route. People are tripping and falling as they cross from one side of Main Street to the other, and this week, a man in his sixties in front of Aldo’s Pizza feel over one such hazard, hitting and cutting his head on the trolley tracks, gashing his knee, and sustaining other cuts and bruises.

On Main Street between Union and Gayoso, there are about a dozen similar obstructions.

We often hear rhetoric that the first priority for government is the safety of its people. Surely, that applies to people walking down Main Street.

Hopefully, someone will address the problem before the injury toll mounts.

Billboards Are Signs of the Time – Business As Usual