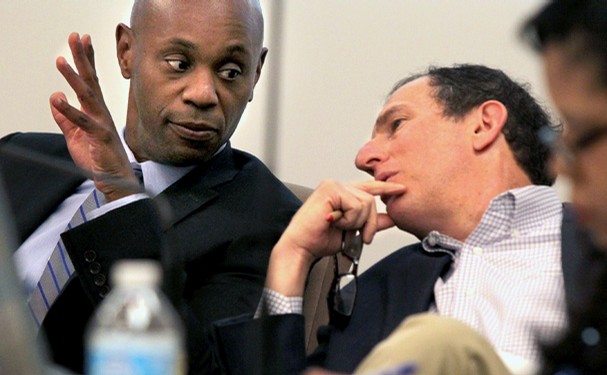 Shelby County Schools Superintendent Dorsey Hopson is like the proverbial guy trying to change a tire on a car going 100 miles per hour.

There’s just so much that can go wrong.

Despite generally favorable reviews – and already talk of a contract extension (which seems premature) – and his adroit handling of the most complicated political and educational landscape devised by man in the merger and un-merger of all public schools in Shelby County, he’s managed to prevent the catastrophes predicted by the suburban critics who love to malign all things Memphis and who seem to relish any difficulties that besetsthe city that drives their economies and largely provides their quality of life.

Of course, Mr. Hopson’s challenges don’t just involve the newly formed municipal school districts, but also involve charter schools, Achievement School District schools, innovation Zone schools, Gates Foundation programs, Race to the Top issues, and God knows what else.  Into this jumbled mix, he must put together yet again a realigned management team, cadre of teachers, and a network of programs to support the academic improvement by which Mr. Hopson will ultimately be judged.

As our dear friend Carol Coletta has said, “Culture eats policy for lunch,” and she is inarguably right.  That in turns point up one of Mr. Hopson’s biggest challenges, because superintendent in and superintendent out, the culture of the school system has been an obstacle to it achieving its top goals.

This of course is regularly the case for all large bureaucracies, including Memphis and Shelby County Governments.  Some years ago, while serving as county mayor, A C Wharton said that his toughest job was changing the culture and we suspect he’s found city government no different.  That’s because rank and file employees and middle managers figure they can always wait out the new administration, and in doing so, they often adopt the language of the new bosses while doing nothing to change their behaviors.

Already, we are hearing stories like this leaking out of Shelby County Schools.  The culture has already been successful in driving out some qualified administrators, particularly if they are perceived as agents of change.  In addition, it’s clear to most observers that Mr. Hopson needs to send the message that he understands the importance of professional educators in his cabinet, particularly in the wake of the exit of former Academic Officer Roderick Richmond.

Meanwhile, the website for the district looks like something left from a first generation website kit, and surely, it is a priority to create a user friendly, navigable, and accurate source of information on the Web.  Speaking of Mr. Richmond, the district’s website still lists him as chief academic officer although he’s been gone six weeks, and information on one page of the website sometimes doesn’t agree with information on another. But with all that’s facing the superintendent, we’re pretty sure he doesn’t spend a lot of time on the Shelby County Schools website, but somebody should.

Back to the issue of culture, we remember that former Superintendent Kriner Cash said the two things that surprised him most were the depth of entrenched poverty here and the obstinance and lack of innovation that ran deep in the central office.    We’re not sure that’s changed, but we’re hopeful that Mr. Hopson can do something that was an organizational obstacle for his predecessors.

Too many people delude themselves into thinking that the more than 100,000 students who live inside Memphis aren’t relevant to them but we ignore these young people at our peril. With no in-migration of new talent and with the exodus of college-educated, 25-34 year-olds, we don’t have the luxury of thinking that we’ll bring in enough new talent to offset our failure to educate these students.

Like only a handful of cities in the U.S., the students in our urban school district will drive everything in their path – the economy, the quality of life and our ability to compete. But before we succeed at that, Mr. Hopson must change a culture that tends to strangle all innovation in its crib.

Generally, each new superintendent throws out all that came before and this constant stopping and starting prevents any momentum for progress. So far, Mr. Hopson seems to be building on progress made in the past while adding his own additional agenda items.

At its most basic, the problem of the top-down culture at our school district is a no-brainer. It has to end.

As one long-time administrator has said, “The best thing would be to burn the place down and start over.” But short of a pyromaniac’s dream, the objective is to end the central office-centric attitude that so often characterizes decision-making and to remind everyone there that their jobs are to serve the schools and not the other way around.

As Mr. Hopson comes to grip with cultural change that is needed, we offer a few keys to success:

* Establish a “no excuses” philosophy for every student and every parent.

* Develop a widely-owned philosophy of teaching and learning built on buy-in that is broad and wide.

* Build trust and encourage risk-taking built on a foundation of predictable behaviors and consistent messaging that appreciate people who are willing to innovate.

* Base decisions on data to eliminate favoritism and politicized decisionmaking so people are rewarded for what they know, not who they know.

* Encourage a culture of continuous learning and professional development.

* Acknowledge non-negotiables to be clear about the essential elements of the agenda, inviting discussion about building a program with input from senior management but also support staff and principals.

* Pursue collaboration inside and outside the district, because it’s more important now than ever.

In the end, the goal that we all should support is this: to create a culture at Shelby County that is one of trust, openness, communications and continuous improvement, the keys to long-term reform and fulfillment of high expectations.

School Board Races: Bluff City Education and Stand for Children

Towns Get What They Paid For With Consultants’ Report on Schools